EXCLUSIVE PICTURES: Ivanka Trump and Jared Kushner in Miami the day after their explosive testimony 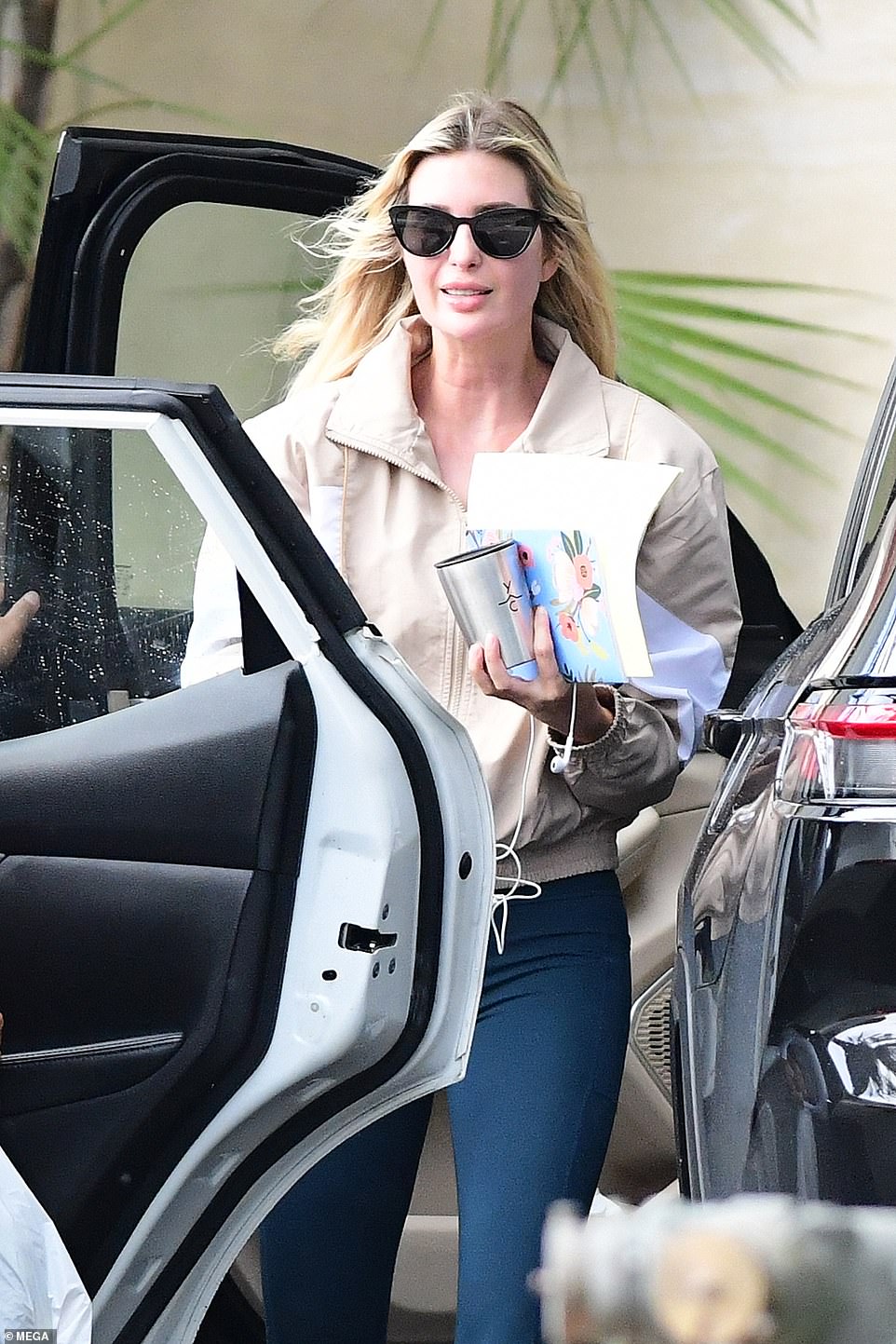 
Ivanka Trump and her husband Jared Kushner were seen out and about in Miami on Friday – the day after their explosive appearances at the January 6 Committee hearing, which was denounced by Donald Trump hours later.

Testimony from the pair was broadcast to the committee room, with the former president’s daughter, 40, stating for the first time that she did not believe her father’s claim that the 2020 election was rigged.

Kushner, meanwhile, was shown dismissing the threats of resignation from White House lawyers as ‘whining’.

On Friday, the couple were in Miami, running errands in the rain.

The former fashion entrepreneur was dressed down in leggings and a bomber jacket, while her husband was casual in shorts and a t-shirt.

Ivanka Trump was pictured out on Friday in Miami, running errands on a rainy afternoon

The 40-year-old mother of three angered her father with her testimony, which was broadcast to the January 6 committee hearing on Thursday night

The eldest daughter of Donald Trump was seen holding a notebook, earphones and a coffee cup as she headed out in Miami

Jared Kushner, 41, is focused on writing his memoir about his time in the White House, and launching his private equity firm

The real estate scion also made an appearance on Thursday night, with a brief clip of his testimony from earlier in the year broadcast to the room

The pair live in a rented condo in Surfside, 13 miles north of downtown Miami.

They have bought a $30 million estate nearby in Indian Creek Island, and are expected to move in in the fall.

He has been spending his time working on his White House memoir, and developing his private equity firm.

She is focused on her charity work – last month visiting Poland, to speak to Ukrainian children – and raising their three children.

In a 17-second clip of her interview to the committee that was played during Thursday’s primetime hearing, she backed up the assertion made by former attorney general Bill Barr that the election wasn’t stolen from her father.

‘I respect Attorney General Barr. So I accepted what he said — was saying,’ she says.

Ivanka Trump is seen with her father in April 2020. She worked as a senior advisor to the then-president

The former president said on Friday that Ivanka was ‘not involved in looking’ at the results of the 2020 election.

‘Ivanka Trump was not involved in looking at, or studying, Election results.

‘She had long since checked out and was, in my opinion, only trying to be respectful to Bill Barr and his position as attorney general (he sucked),’ Trump wrote on Truth Social, around 12 hours after part of her testimony was revealed.

His denouncing of his eldest daughter surprised many.

Trump and Ivanka, daughter with his first wife Ivana, were known for their close relationship and she was seen as his favorite child.

She served as an adviser in his White House and Trump often said she could be president one day.

Trump had turned on other advisers who testified before the panel and who refused to back his false claim he won the 2020 election over Joe Biden.

But it was believed Ivanka testified before the panel with tact approval from her father.

In a series of posts on Truth Social, the former president denied he said his vice president Mike Pence should be hanged for not supporting his false claim he won the election.

He also repeated his false claim he was the real winner and berated lawmakers for not investigating his allegations of election fraud, which have never been proven.

In April, Ivanka Trump spent eight hours testifying before the House committee investigating the attack on the Capitol, where Donald Trump supporters attempted to stop the certification of the election.

She reportedly was one of the White House staff who went to the Oval Office multiple times on January 6, asking her father to tell his supporters to leave the Capitol.

But a forthcoming book details how Ivanka and her husband, who served as a senior counselor to Trump, were preparing for their post-White House lives shortly after the election and Trump’s false claims he won the contest.

On November 5, 2020, within 24 hours of Trump first publicly proclaiming he was the true winner, Kushner turned to Ivanka and told her: ‘We’re moving to Miami.’

The claim was made in the book The Divider: Trump in the White House, 2017-2021, by New York Times reporter Peter Baker and New Yorker reporter Susan Glasser.

‘No matter how vociferously Mr. Trump claimed otherwise, neither Mr Kushner nor Ivanka Trump believed then or later that the election had been stolen,’ according to the book, which cites people close to them.

He was interviewed by the panel for six hours in March.

Republican Rep. Liz Cheney is shown asking him about threats from Trump’s White House counsel to resign over the former president’s conduct.

‘Jared, are you aware of instances where Pat Cipollone threatened to resign?’ she said.

‘Like I said, my interest at that time was on trying to get as many pardons done as possible,’ Kushner said.

‘And I know him and the team were always saying, we are going to resign, we are not going to be there if this happened, if that happens.

‘So I kind of took it up to be just whining, to be honest with you,’ he noted.

Kushner was notably absent during critical periods in the last days of the Trump White House and he was overseas on January 6.