Eugenie says she is teaching her son August, one, about climate change 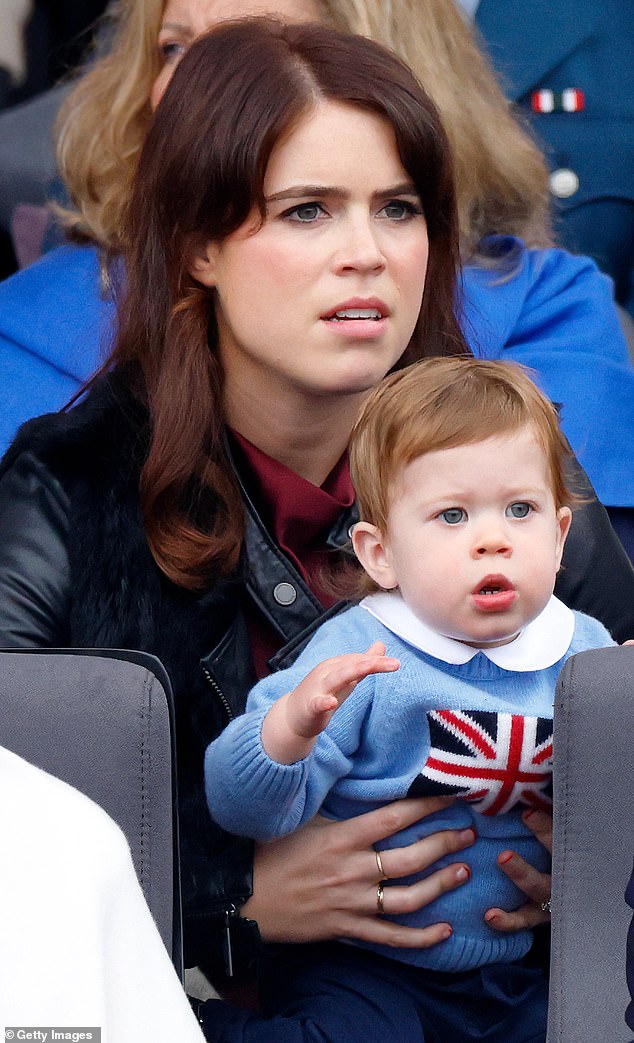 
Princess Eugenie has said she wants her son to be a climate change activist from ‘aged two’ and has ditched all plastic products around her house.

Speaking at the World Economic Forum in Davos, the 32-year-old said giving birth to her son, August, last year had ‘totally changed’ her outlook on the environment.

‘My son’s going to be an activist from two years’ old, which is in a couple of days. Everything is for them, right? Every decision we now make has to be about how August is going to be able to live his life.’

Her comments echo interventions by her cousin Prince Harry, 38, who has described how ‘everything changed’ when he became a father because he started to question ‘what is the point in bringing a new person into this world when they get to your age and it’s on fire?’.

He has also praised children – led by Swedish activist Greta Thunberg – for refusing to attend school as part of a ‘climate strike’. Speaking on a visit to 2020 in 2020, he said: “This week, led by Greta, the world’s children are striking. There’s an emergency. It’s a race against time, and one which we are losing. Everyone know it.’

Princess Eugenie said her one-year-old son, August, is the focus of her climate change activism (pictured with her son at the late Queen Elizabeth’s Platinum Jubilee in June 2022)

During her interview in Davos, Eugenie spoke about the impact motherhood has had on her.

She said: ‘As a mother you totally change. Now I’m scared of flying where I’d never be before. It’s the same with how you view the world – now all I think about is what happens to rising sea levels and the communities that are on the beaches who depend entirely on the sea – as well as what August can do about it in the future.

The Duke of York’s daughter shared that becoming a mother has made her more concerned for communities vulnerable to climate change in a discussion with Reuters IMPACT and Arctic Humanity at Risk Basecamp, a non-profit organisation to highlight the impact that climate change is having on the Arctic.

Speaking with Reuters editor-at-large Axel Threlfall and Arctic Humanity founder Gail Whiteman, Eugenie said: ‘My son’s going to be an activist from two years old, which is in a couple of days. So, he, everything is for them.

‘I talked to Peter Thomson, the UN Special Envoy for Oceans and all he says to me is that I do this for my grandchildren. And that’s the same.

‘Every decision we now make has to be for whether August, what he’s going to be able to look at and do and how he’s going to live his life.

‘But I think also as a mother, you all of a sudden, totally you change, your hormones change, everything changes.

Harry, who has described how ‘everything changed’ when he became a father because he started to question ‘what is the point in bringing a new person into this world when they get to your age and it’s on fire?’. He’s seen with Meghan and Archie in 2019 during their trip to South Africa

In an interview with Reuters IMPACT and Arctic Humanity at Risk Basecamp, Eugenie said educating her son about the environment is a ‘battle’

Prince Andrew’s youngest daughter said she views the world differently since becoming a mother, and her concerns about climate change have affected how she lives.

But the princess also spoke of her hope for the future of the environment, saying: ‘I like to be ‘glass half full’.’

She added: ‘I’d rather be that way, but sometimes the facts and the figures and sometimes having the dinners do give you that sort of sense of frustration and doom and gloom.’

She also warned of the impact of a changing environment on vulnerable communities, adding: ‘Modern slavery and human trafficking is a really big issue across the globe.

‘There are 49 million people estimated in slavery today and we know that when the climate is vulnerable, the most vulnerable people are affected by it.

‘And we’re going to see that more and more, you know, each time there’s a crisis happening, that people are going to be vulnerable and taken into difficult situations.

‘So climate goes hand in hand with it really.’

Eugenie has been vocal about the fight against plastic pollution and tried to make her wedding to Jack Brooksbank in 2018 as plastic-free as possible, including offering guests water in recyclable aluminium cans.

She explained in the Daily Mail: ‘Like many people, I am saddened by images of wild creatures on beaches, which I have seen photographed strangled or entangled by plastic, and their lives ended by our casual use and discarding of plastic.

‘I know that so many people feel the same dislike of inadvertently harming the things that are the most precious and beautiful in the natural world.

‘I have always loved being in nature. My parents instilled in me a love of wild places and a respect for animals and the natural world.’

The royal was appointed ambassador for the Blue Marine Foundation in 2021 and released a mini series last year discussing ocean conservation with leading ocean advocates.

Princess Eugenie’s appearance at Davos came after her cousin Prince Harry, with whom she is very close, released his bombshell memoir Spare. She was also the only senior royal to make an appearance in the Duke’s Netflix series, Harry & Meghan.

In the first episode, of the Netflix series, the royal is seen partying alongside Prince Harry and Meghan Markle the night before their romance was made public in 2017.

Eugenie was reportedly among the first to know about Prince Harry’s relationship with Meghan, whom she already knew through their mutual friend Misha Nonoo.

Jason Knauf who informed him that the news of his new relationship had reached the press.

Megan recalled: ‘Well, if it’s going to come out tomorrow, let’s go and have fun tonight!’

Harry added: ‘We went to this Halloween party together, where we could be completely dressed up and no one would know. I had a bandana and goggles on.’

Sharing photos from their night out, Meghan said: ‘His cousin Eugenie and her boyfriend of the time Jack and my friend Marcus were there too. It was so great. Just silly fun.’

Share. Facebook Twitter Pinterest LinkedIn Tumblr Email
Previous ArticleDoja Cat was covered in red body paint and 30,000 crystals at Haute Couture Week
Next Article “If the ladies at BBNaija went there for ‘customers’ what did the men go there for?” — PR expert, Big Sam asks