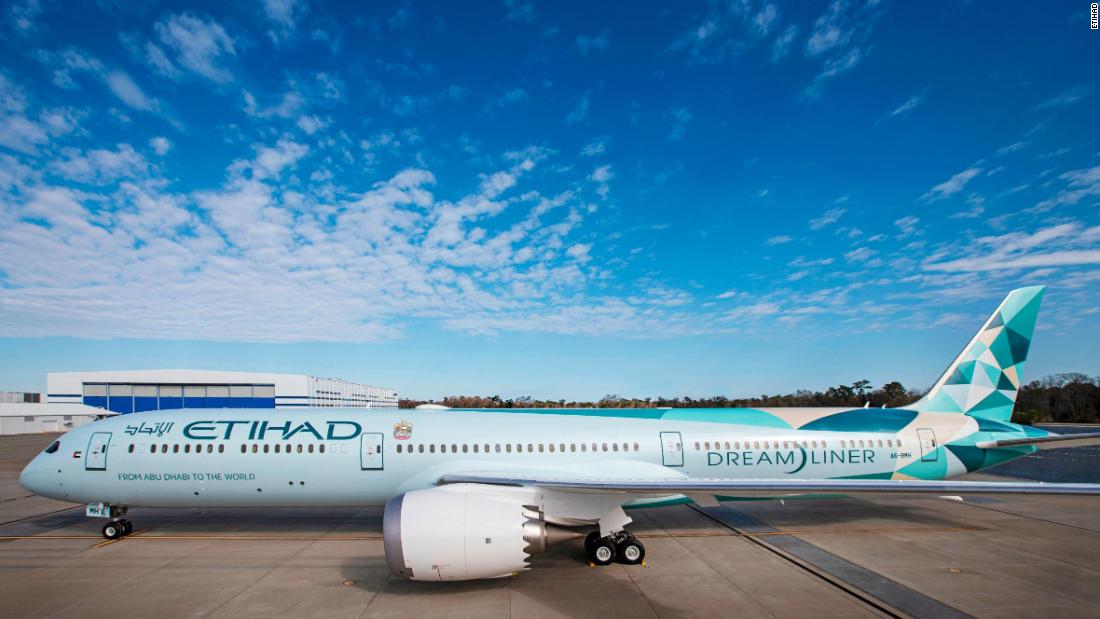 
(CNN) — While some delegates at last week’s COP27 climate conference were criticized for arriving by private jet, others arrived in Egypt aboard flights that were described as being emission-free, as they were powered fully by sustainable aviation fuel.

The flights were part of a program called “Greenliner,” run by Etihad Airways, the national carrier of the United Arab Emirates, as a testbed for sustainable air travel solutions.

Commercial aviation accounted for just over 2% of global CO2 emissions in 2021, which suggests it may be a modest contributor to climate change. But the number doesn’t tell the whole story, as air travel affects the climate in more complex ways than just carbon emissions, and its impact is predicted to rise in the future, as more and more people will want to fly.
Whereas renewable energy and electric vehicles offer clear pathways to decarbonize sectors like power and road transport, it’s less straightforward for the aviation industry.
As a result, the industry is not on track to meet its net zero target by 2050, and is banking on two thirds of that transition coming from sustainable aviation fuel (SAF). It’s made from waste products and can curb emissions by 80% on average — but it currently accounts for just 1% of global jet fuel usage. Something needs to change, fast.

That’s why SAF is one of the key elements of the “Greenliner” program. “It’s essentially a call to action,” says Mariam AlQubaisi, head of sustainability at Etihad. “The idea came about in late 2019 to launch a message to the industry: let’s try everything possible to decarbonize.” The program is based around the Boeing 787 Dreamliner, but Etihad has a similar initiative, called Sustainable50, dedicated to the Airbus A350. Since its launch, Greenliner has championed the adoption of SAF and tackled issues such as plastic waste and inefficient flight routes.

The “Greenliner” moniker is often used to refer to a specific 787 aircraft, which AlQubaisi calls the program’s “mascot.” Unsurprisingly, it’s painted green — which she says is a way pre-empting accusations of greenwashing.

“Any project any airline would launch will always be scrutinized under the umbrella of greenwashing,” she explains. “Painting the aircraft green was a way to challenge that and say it is dedicated to a purpose. We’re owning up to our emissions: We’re saying yes, we’re a major emitter — but we’re doing something about it.”

Etihad ferried delegates to Sharm El Sheik in Egypt, where COP27 took place, by adding a stopover to its regular Washington Dulles to Abu Dhabi service. The flight was described as “emission-free” due to being powered entirely by SAF — but confusingly, the planes actually used traditional jet fuel.

The apparent absurdity highlights challenges with both SAF infrastructure and communicating green initiatives. The plane didn’t have SAF on board because current regulations prohibit commercial flights from using more than 50% SAF, as not all engines are certified for higher concentrations. Plus, not all airports have the infrastructure to use it, and the green fuel must come from a production facility relatively close to the airport to avoid canceling out the reduction in flight emissions with those coming from transportation.

So, Etihad purchased enough SAF to power the flight and delivered the fuel to Los Angeles International Airport, which has the necessary infrastructure and facilities. There, the SAF was integrated into the airport’s refueling system with traditional fuel, and used by whichever aircraft were refueling that day. This system is called “Book & Claim,” and it’s currently the only way for a flight to claim it’s using 100% SAF. The emissions are simply offset elsewhere, rather than on one specific flight.

AlQubaisi calls it a “quick fix” until regulations change, but for SAF to become more widespread, more progress is required. “The price of SAF is four to five times that of conventional jet fuel and it’s limited in supply. Only two bodies are allowed to certify it, so until we have more and until governments intervene to incentivize production, SAF will continue to be limited,” she says.

Etihad has used SAF extensively in a series of “EcoFlights,” which employ the carrier’s 787 and A350 fleet to assess new sustainability initiatives. These culminated in the airline’s most environmentally friendly flight ever, a London Heathrow to Abu Dhabi service on October 23, 2021. The flight, Etihad says, achieved a 72% overall reduction in emissions by using 38% SAF (via “Book & Claim”) and adopted a host of other measures, such as reducing single-use plastic by 80% and delivering baggage via electric tractors.

It was also the first commercial flight to test a novel way to combat emissions, by using navigation and artificial intelligence to avoid the formation of contrails. These are vapor trails that form when ice crystals coalesce around the exhaust gasses emitted by aircraft engines, and result in temporary clouds that trap heat, contributing significantly to the warming effect of air travel. But modifying the plane’s route or altitude can help dramatically. “The warming you’re avoiding by simply adding a little more time to the journey is up to 60%, if not more,” says AlQubaisi. “What’s nice about this is that it’s done via specific algorithms that make the system become smarter the more we use it.”

Etihad’s “EcoFlights” have trialed a range of technologies and techniques aimed at reducing emissions, such as an optimized climb and a continuous descent, last-minute engine start-up, taxi procedures using a single engine, and washing the engine with a special foam that improves efficiency by reducing the build-up of deposits.

Many of these techniques have since made it into everyday operations, and in recognition of these efforts Etihad was named “Environmental Airline of the Year 2022” at the annual Airline Ratings awards. According to Geoffrey Thomas, Airline Ratings’ editor-in-chief, Etihad has shown “clear leadership in the push for sustainable flight.”

There’s still a lot to be done, AlQubaisi says: “This is an industry that has had free rein on pollution for many years and it’s about time we own up to our responsibility to decarbonize.”

The key to achieving a greener aviation is everyone working toward it, she adds: “Hopefully you’ll hear of more airlines joining the Greeliner program, because it doesn’t matter who does it first — what matters is who does it better.