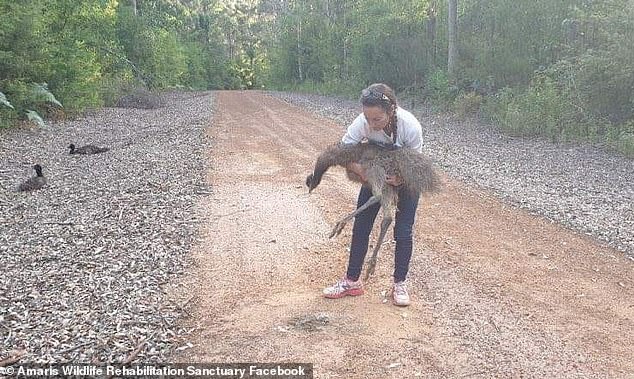 
Five baby emus are DELIBERATELY run over on a remote dirt road as their owner breaks down in tears over the sickening act of animal cruelty: ‘A massacre’

Heartbreaking images of five emu chicks ran over and left for dead on a remote road in a national park have sparked community outrage over what’s been described ‘deliberate act of cruelty’.

A quest for answers is underway after the ‘massacred’ chicks were discovered in various states of trauma with horrific injuries across a dead-end road in Hawke National Park at Yeagarup in Western Australia‘s southwest on Saturday.

Volunteer wildlife carer Leonie Burt was called out to the distressing scene, and by the time she arrived, two chicks were already dead.

Three others barely clinging to life were rushed to Manjimup Veterinary Clinic but were in such a bad state there was no other choice but to euthanise them.

One had a broken spine, another with a broken leg, while a third with a broken pelvis and smashed leg fought hard to stay alive but eventually succumbed to his injuries.

An emotional Ms Burt is still traumatised by the horrifying discovery and believed it was a deliberate act of animal cruelty.

‘The way the birds were laid out, they were scattered and quite some distance apart,’ she told Seven News.

‘If five birds had been walking in a row in the middle of the road, that’s where they would have fallen but they were everywhere.’

‘It was the most horrific scene I’ve come across and these babies were looking at me like ‘what have we done to deserve this.”

‘It was the most horrific brutality I’ve seen. Someone has mowed these babies down. They’ve chased them down.’

The Department of Biodiversity, Conservation and Attractions is investigating the shocking act of cruelty

As the shocking act took place in a national park, the culprits responsible could face criminal charges if they’re tracked down.

Distressing images show the emu chicks scattered alongside and in the middle of the  road.

‘Why would someone run over five emu chicks and not stop and ask for help? Unfortunately there was no sign of Mum and the bush is too thick to penetrate,’ Amaris Wildlife Rehabilitation Sanctuary shared posted.

The sanctuary later added there was no sign of the chicks’ dad, their primary carer.

Local believe the horrific incident wasn’t an accident . Pictured are the five emus scattered across the dead end road

The Department of Biodiversity, Conservation and Attractions is investigating.

‘They are out looking for Daddy Emu and moving the deceased ones into the bush. Also they have a camera set up and will be checking on all vehicles that travelled through the area. This was in a National park,’ the sanctuary added.

Members of the local Pemberton community have pitched in towards a $1500 reward for anyone with information about who’s responsible.

‘The community is so strong and they can see this is an act of cruelty and it’s not to be tolerated,’ Ms Burt said.

‘These people need to be prosecuted.’

a community manhunt is underway to track down the culprits responsible (pictured, one of the injured emus clinging to life)