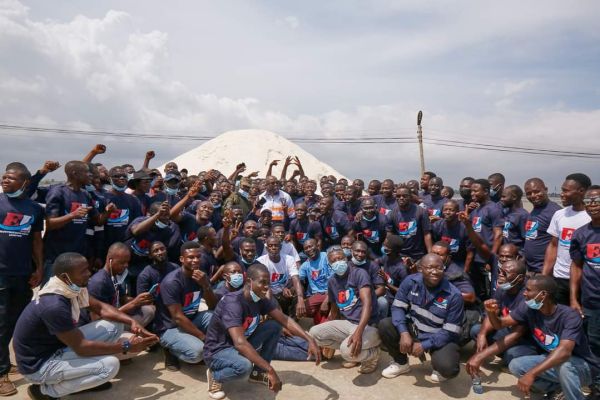 
Electrochem Ghana has, within the first two years of its operations, employed more than hundred (100) graduate engineers from various universities in the country.

Most of these engineers who are employed, and who are from Ada and its surrounding communities are doing well with the company.

These graduates who hitherto, will be scouting for jobs for years have been given the opportunity by Electrochem Ghana to work and earn a living soon after they completed their university education, which is giving them great financial freedom.

This is just a fraction of all the total employment the company has made which constitute its workforce. The company aware of the concerns of the people and how the operations might affect them directly or indirectly, established an initiative to scale up the construction of community pans for salt winning by artisanal miners in communities bordering the company’s concession in the Ada West District.

It is established that ten of the community pans that have already been built for Nakomkopewithin the Agbakpe community are filled with mature brine (saltwater), which will crystalize into top quality salt for the locals to mine.

“It is interesting to know that the creation of pans for the community is a topmost priority for us as a responsible entity and we can beat our chest and say that we have done better in that area. The salt harvesting season is the first half of the year, so we did everything in our power to ensure that at least some of the pans are ready for the people to get some output before the season is over. This initiative is the company’s way of ensuring that the livelihood of artisanal miners (Atsiakpor) is not disrupted.”

According to the company, it has the wellbeing of the citizenry and the overall development of the Ada states at heart, and that is why they come first in everything they do.

Other things the company has done within these two years to the people include employment to over 2000 youth, uninterrupted fishing in the lagoon, granting loans totalling over GH¢30,000 for some women for their trading activities, sports village at Sege and support to the Ada West District Polyclinic.

Electrochem Ghana Limited, a wholly owned Ghanaian company registered in 2017 under the laws of Ghana is pleased to announce to the people of Ghana that it is in the second year of its operations on the Ada Songor Salt Lagoon which was leased to it for redevelopment.

These two years of our operations have not been too rosy but the company is doing well and continues to work to the betterment of the people of Ada and its environs.

Electrochem is strategically positioned to leverage over two decades of expertise and resources to invest in and maximise returns from the salt and chemical industries.

The Company has secured a concession of 41,000 acres at Ada Songor to produce 1,000,000 metric tons of salt per annum to supply to local and export markets.

In the medium term, the output will be increased substantially and part of it used to feed a chlor-alkali plant for the production of caustic soda and other chemical products.

However, key on their agenda is job creation, employment, improvement in livelihoods and better living conditions for the people especially women.

The company also has rolled out numerous CSR projects and has rehabilitated portions of a six-kilometre road that connects key salt mining communities in the district such as Nakomkope, Agbedrafor, and Koluedor.

Electrochem Ghana is poised and committed to its vision of becoming one of the leading salt producing and a chlor-alkaline manufacturing companies in Africa and the world, but this cannot be achieved without the people, hence all efforts are being made to bring all on board to make this work.

“It is however interesting for certain groups of people to constantly launched unrelenting attacks on the company even though they are seeing the prosperity footprints in the lives of their own people as far as the project is concern.”

It is believed that the company will not be moved by such attacks and claims but will focus on its responsibilities as a company.