Electricity market is SUSPENDED as ‘low solar and wind output’ 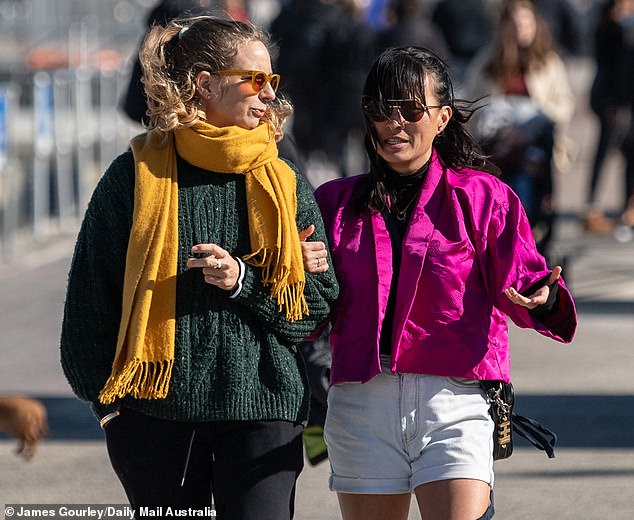 
The entire national electricity market has been suspended for the first time ever in a bid to avoid mass blackouts after prices soared during freezing winter weather.

The operator blamed planned and unexpected coal power station outages, scheduled transmission outages, the early onset of winter and periods of low wind and solar output for the crisis.

Treasurer and Minister for Energy Matt Kean on Wednesday evening asked that residents in NSW reduce their electricity usage from 5:30pm to 8:00pm.

The national electricity market has been suspended for the first time ever. Pictured: Bondi residents wrapped up warm on a cold morning

Of the renewable sources, solar makes up about 37 per cent and wind 36 per cent. Pictured: A Wind farm in Tasmania

‘If there is an opportunity for people to reduce their energy usage, so perhaps not using the dishwasher until you go to bed, that would help,’ Mr Kean said.

‘This is the result of a number of our coal-fired power stations not working when we need them to do so.

‘We are focused on making sure we get through tonight and the next couple of days.’

Mr Kean told reporters that a number of generators that were expected to be working tonight have not come online and said he would continue to work closely with the AEMO to ensure the system remains reliable.

About 60 per cent of Australia’s electricity comes from coal while 32 per cent comes from renewable sources.

Of the renewables, solar makes up about 37 per cent and wind 36 per cent, meaning the nation can be left short of power when the sun doesn’t shine and the wind doesn’t blow as much as usual.

The suspension means the operator will take control of directing supplies to the east coast power grid from the energy generators.

The generators are expected to make themselves available and will be paid a set price.

It is the first time the whole market has been suspended since creation in 1998. The market in South Australia was suspended in 2016 after a state-wide blackout.

In a press conference in Adelaide on Tuesday afternoon, AEMO CEO Daniel Westerman said the drastic step was needed because it had become ‘impossible to operate the spot market’.

Why did AEMO suspend the market?

He warned conditions would ‘remain tight’ and urged Australians, particularly in NSW, to conserve power.

‘Today, AEMO has suspended the national electricity market. This decision was made because it was impossible to operate the system under current conditions while ensuring reliable, secure supply of electricity to Australian homes and businesses,’ he said.

‘By suspending the market, we are creating a simple process where AEMO has true visibility of which generators are available and when in advance.

‘That visibility will help us to manage the system in real-time as well as to understand the balance of supply and demand in the period ahead.

‘Despite this, conditions remain tight in the coming days, in particular in New South Wales where we would urge consumers to conserve energy where it is safe to do so.’

On Monday night parts of Sydney’s northern beaches were briefly plunged into a blackout while Queenslanders narrowly avoided the same fate.

On Tuesday AEMO had to direct five gigawatts of generation through direct intervention to prevent blackouts after generators stopped supplying power because a price cap meant they would have lost money.

The suspension of the market is temporary and will be reviewed daily.

Western Australia and the Northern Territory are not part of the national electricity market (NEM). The ACT is included in NSW for the purposes of the NEM.

‘AEMO advises me that that will likely continue to be the case that we will be able to avoid any load shedding events or any blackouts,’ he told reporters in Gladstone.

‘Of course, that is subject to any unexpected outages in the system… which is under pressure.’

‘If they’re not doing the right thing, the regulator will take appropriate action,’ he said.

The chair of the Australian Energy Regulator Clare Savage said talks were taking place on Wednesday to ensure there was enough power supply.

A lack of solar power has been blamed for the energy shortfall. Pictured: A house with Solar Power in Oran Park in Sydney

Despite shortages in some of the market, Ms Savage said generators were doing everything they could to keep the power running.

‘Supply is very tight right now, but we do know there is more generation available that is being bid into the market,’ she told the Seven Network.

‘The Australian Energy Market Operator is working around the clock with generators to make sure we have enough supply to keep the lights on.’

Ms Savage said she wrote to every generator in the east coast on Tuesday to make sure they understood their responsibilities.

‘We saw the situation evolve over the weekend where there was a price cap put into the wholesale market and a number of generators who said they were available suddenly withdrew their capacity,’ she said.

It was impossible to operate the system under current conditions

‘We wanted to be quick off the mark to communicate with these generators to put them on notice and make sure they understand their obligations.’

He said his state was spending $600million on a hydrogen power plant to stabilise energy supply.

‘We are in a first-world country that is energy rich, and the fact we’ve now got Australians being told to turn porch lights off to keep the system going, that is somewhat of an embarrassment,’ he told ABC Radio.

‘We are witnessing market failure on a grand scale.’

‘It’s very challenging for generators to be expected to bring supply online,’ she told ABC Radio.

The new Labor government is urging coal power plants to increase output as soon as possible. At least 25 per cent of coal power is offline.

European nations have also ordered increased coal production as a temporary measure to wean themselves off Russian gas following Moscow’s invasion of Ukraine.

Germany has drafted laws to prevent coal power stations destined for the scrapheap from being axed, ordering them to be kept on standby instead.

Italy, Bulgaria, Romania and the Czech Republic also plan to burn more coal and the UK is drilling for more gas in the North Sea.

What is happening in the electricity market?

AEMO STEPS IN TO TAKE OVER ELECTRICITY MARKET

AEMO says it has become impossible to continue operating the spot market while ensuring a secure and reliable supply of electricity for consumers in line with the rules.

WHAT ACTION IS BEING TAKEN?

The market operator will apply a set price for the five states in the NEM, compensating the generators who bid into the market during the suspension price period.

It followed AEMO being forced to direct five gigawatts of generation through direct intervention on Tuesday and finding it was no longer able to operate the spot market or power system in this way.

The market will resume operating normally as soon as is practical.

AEMO has assured the federal government there will be enough power to avoid load-shedding or blackouts.