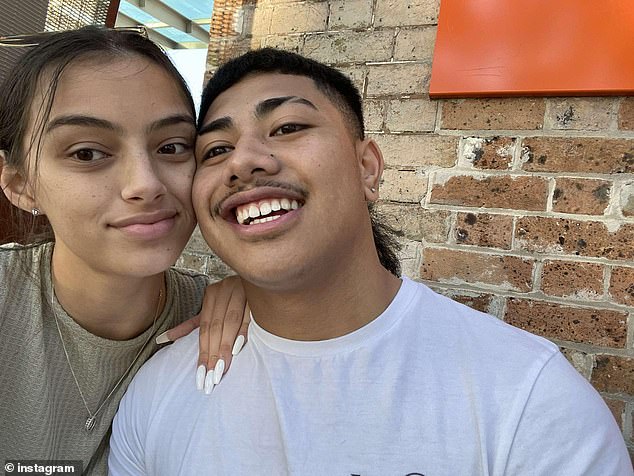 The grieving teen whose boyfriend was stabbed to death during a wild brawl at the Royal Easter Show has given birth to their first child, naming him in honour of her partner.

Carnival ride worker Uati ‘Pele‘ Faletolu, 17, from Doonside in Sydney‘s west will never meet his baby son after he was tragically killed on April 11, just weeks after he and his girlfriend Taylor Piliae discovered they were expecting their first child.

She gave birth to their son last week, who was named Uati in a sweet tribute to his late father.

Photos shared online show baby Uati newborn being held and doted on by proud loved ones.

‘Welcome to the world bubba my heart’s so full, I love you so much,’ Taylor’s sister Bree captioned a photo cradling her beloved nephew.

Both mother and baby are doing well, family members told The Daily Telegraph.

Bree confirmed on Instagram, several days after Uati’s death, that her sister Taylor was expecting her first child with a partner, sharing a photo of the ultrasound of her nephew.

Days later, Taylor told mourners at his funeral that Uati was ‘the best boyfriend and the best everything to everyone’.

‘I wish I had 10 more minutes with you to tell you how much you’re appreciated. You would have been the best dad,’ she wept.

‘I promise I’ll take care of our baby.’

She told how Uati was planning to spend his Easter Show earnings on the new baby.

Ms Piliae has spent recent months documenting her pregnancy on TikTok and paid an emotional tribute to her late partner, asking him to ‘watch down’ on their son.

‘Please watch down on our future son. We love you.’

She shared a montage of photos to the song In The Stars by Benson Boone, and quoted some of the lyrics.

Photos of Uati were on display at Ms Piliae’s recent baby shower.

Uati was on a break from his job working on the Break Dance ride when he was stabbed to death in front of shocked show goers in the carnival ride area on April 11.

Two men aged 18 and a 14-year-old boy were later charged with murder and are currently before the courts.

Taylor Piliae (left) recently posted an emotional tribute to her late partner, asking him to ‘watch down’ on their baby son who was born last week