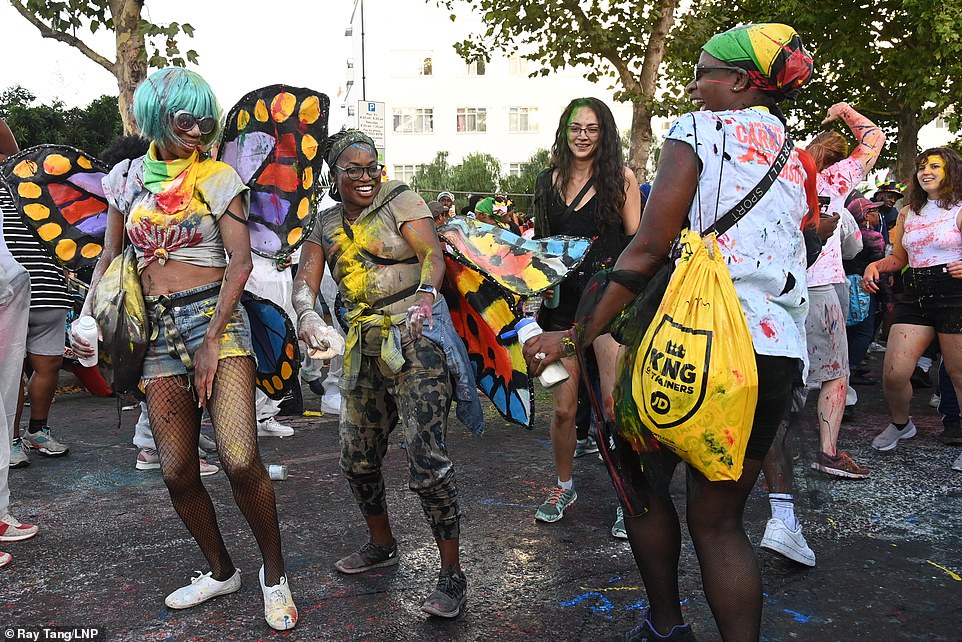 
Notting Hill Carnival kicked off this morning with colourful celebrations in the streets of London as revellers showered each other with paint.

From 6am, festival-goers gathered in the neighbourhood for J’ouvert celebrations, as they sprayed brightly coloured paints and powders ahead of a full day of partying.

People clad in bright colours and butterfly wings filled the street to mark the start of the world-famous event, which is returning to the streets after three years of online celebrations during the pandemic.

After a three-year hiatus due to the Covid-19 pandemic, the event is making its in-person comeback today and tomorrow.

Festival-goers gathered in the neighbourhood for J’ouvert celebrations, as they sprayed brightly coloured paints and powders ahead of a full day of partying

Defending champions Mangrove have won for three years in a row, and member Joelle Gardiner, 34, said: ‘It is hard to put into words how good it would feel to win tonight.’

‘I have been coming to carnival ever since I was six or seven, watching people play until I was at the age where I could get involved as well.’

Meanwhile dancers were preparing their costumes while shops and houses are boarded up in preparation for the world-famous event’s return.

Colourful floats and parades will fill the streets, as huge sections of west London are closed from 6am today until 6am on Tuesday.

After a three-year hiatus due to the Covid-19 pandemic, the event is making its in-person comeback today and tomorrow

The event is hugely popular and has been known to attract an astonishing two million people in years gone by – grinding a whole section of London to a halt.

Carnival participants have said they are looking forward to feeling the bass of the music and seeing their creations ‘brought to life’ as the event returns to the streets of London.

Marelle Steblecki, 29, a womenswear and carnival designer, who is currently based in Kent, has been designing costumes for this year’s event and said she is ‘excited’ to finally wear a costume she planned to wear pre-pandemic.

‘I’ve had my particular costume, which is rose gold, purple and teal booked with my carnival band (United Colours of Mas) since 2018, so I’ve been waiting to wear this for two years,’ she said.

‘The carnival band that I’m playing with chose their theme as Africa.

‘It is good for people to see that there are true influences behind each costume.’

She said that she feels as though the carnival ‘chose’ her as she was put in contact with South Connections, which was one of the longest-standing carnival bands within Notting Hill, by her school in year nine for work experience.

‘When summer came around, I kept going and because I was there all the time, I became a reliable source of help.

‘People who were doing gemming or feathering would pull me aside and take me under their wing until I expressed the desire to design costumes, and they nurtured my talent and gave me the confidence to pursue this.’

Ms Steblecki said helping to design the costumes has been the ‘stuff of fairytales’.

Marelle Steblecki, 29, has had her costume ready to go for the carnival since 2018, with the festival returning this year following the pandemic

Pepe Francis MBE, 79, who lives in London and is director of the Ebony Steelband Trust, who will be performing at the carnival, said he is ‘glad the carnival is coming back’, even though preparation has been ‘madness’.

‘A lot of people have been waiting for it to come back,’ he said.

‘If the pre-carnival event is anything to go by this year, it’s going to be absolutely chocker.’

The steel band which has been at the carnival since its ‘inception’- for over 50 years – is set to participate at the event again this year and are like a family, despite members leaving and joining over the years.

‘Since the band has started, I’m on my fifth generation of people and there’s been a lot of changes,’ he said.

‘But our members look forward to carnival every year and practice takes place regularly from year to year.’

He added that his fondest memories were from ‘back in the day’, when ‘we could roam through every street in Notting Hill’.

His love of carnivals extends further than just Notting Hill.

‘I think my best memories are growing up in Trinidad, but I go to carnivals all over the world, in New York and Miami,’ he said.

‘I love all carnivals, maybe the international ones even more because I don’t have to work as part of them,’ he joked.

Despite stepping down as an organiser around three to four years ago, he said he will ‘always be involved in one capacity or another’.

‘I was involved in running the carnival for the best part of 40 years and even though the board and committee will change over the years, I will always be involved and connected to it.’

The return of carnival was exciting for spectators as well as participants and people of all ages were dancing in the streets on Saturday.

Bhavini Goyate, 29, who lives in Harrow, said: ‘To come back together is so special because a whole community are coming through for this year to come together again.

Colourful floats and parades will fill the streets, as huge sections of west London are closed from 6am today until 6am on Tuesday

‘This street rehearsal sets off my weekend.

‘To convene this way means a lot anyway, but especially after everything we have been through, it means a lot more.’

She added: ‘I think it’s going to be an amazing emotional weekend.’

Aaron Williams, 28, who also plays in the Mangrove Steelband, said Saturday’s competition was like ‘Christmas’.

He said: ‘This is my Christmas, this is my favourite part of the year.

‘I’m very excited about it (carnival) coming back, I’ve missed it a lot. It is good to have the vibes back and to see everyone out enjoying themselves.’

Olivia, 34, who did not want to give her surname, travelled from Yorkshire to London for the carnival.

She first attended carnival when she was 14 said that it ‘feels like an incredible thing that still continues to exist’ and is ‘such an amazing celebration of culture and heritage’.

Although the local council said it did not recommend boarding up windows during the festival, many homes and businesses have taken matters into their own hands to try and prevent any damage

However, Notting Hill residents and business owners are fearing the damage that could be caused by the huge number of people at the carnival and have boarded up buildings in advance.

Although enjoyed by the huge crowds that turn up to revel in the carnival atmosphere for the August bank holiday weekend, many are worried about the path of destruction the parades might cause – bringing the neighbourhood into a new lockdown for the long weekend.

The sheer number of people arriving in Notting Hill can cause a headache for local businesses, many of whom have boarded up their windows days in advance for fear of vandalism during the festivities.

The west London neighbourhood is one of the most expensive areas for shops and homes in the UK, with an average house price of over £2 million, according to property website Rightmove.

Although the local council said it did not recommend boarding up windows during the festival, many homes and businesses have taken matters into their own hands to try and prevent any damage.

Restaurants, cafes, shops and multi-million pound houses across the festival area have covered up their windows and doors to avoid any damage caused by the massive crowds passing by.

Thousands of Metropolitan Police officers will be lining the streets to keep order, while the number of metal detectors has been high in recent years in an effort to prevent knife crime.

Several violent crimes have occurred at the festival in past years. At the last carnival in 2019, 463 crimes occurred inside the carnival area in two days – most were not violent but many involved property damage and burglary.

The largest proportion of these were drug offences, of which there were 209 allegations during the festival.

There were also 88 thefts, burglaries and robberies as well as six criminal damage offences recorded.

The Director General of the Ghana Health Service, Dr. Patrick Kuma-Aboagye has directed all Regional…