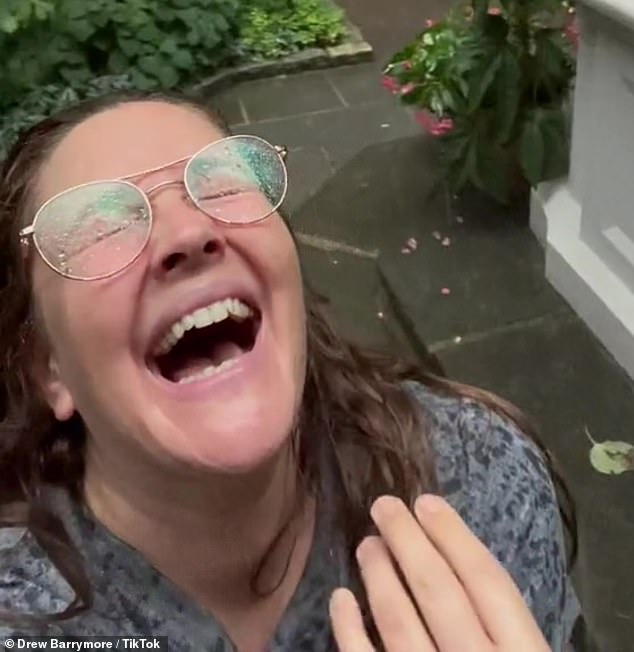 By Joseph Michalitsianos For Dailymail.Com

Drew Barrymore was branded racist over a TikTok clip of herself enjoying a rainstorm – after woke killjoys claimed she’d copied a trend dubbed ‘black men frolicking.’

The accusation comes from an angry fellow TikTok user with the handle @amushroomblackly.

She said Barrymore was an example of a colonizer ‘who disrespect and dismiss the boundaries that black creators have set’ because the video resembled a ‘frolicking’ trend started by black TikTokers earlier this year.

In Barrymore’s video that she posted to her 6.5 million followers, she jubilantly walks around in pouring rain with a broad smile, exclaiming ‘whenever you can, go out into the rain! Do not miss the opportunity.’

Shortly after the actress posted her video, amushroomblackly posted a bizarre response addressing Barrymore directly, saying ‘you and I both know you are capable of enjoying the rain, frolicking freely, without filming it and posting it to TikTok.’

In Barrymore’s TikTok video, she walks outside a house in the rain while joyously encouraging people to go out and feel the rain when they can

She removes her glasses and lets the rain hit her face, but an angry TikToker has accused her actions of being racist

‘And now you’re one of those people,’ she said, pointing to the camera in a video posted to Libs of TikTok’s Twitter account.

The TikToker’s anger stems from a trend originating in May that featured black men running around joyously in fields or other natural settings, with the trend quickly catching on and going viral.

‘I guess my question would be why is it so important to all of you to treat us like we don’t matter?’ Barrymore’s accuser said before laughing and cutting the video.

More black TikTok users joined in the fun and the hashtag #blackmenfrolicking was used more than 600k times on the platform. The trend then spread to different audiences as black woman took part in the trend.

One Twitter user commented on the story and scolded people for ‘focusing on one woman (desperate for views) calling Drew Barrymore a racist for dancing in the rain? Lets get the important stuff trending…’

Politician Shukri Abdullahi Abdirahman tweeted, ‘I’m so utterly confused. Somebody, please explain to the connection between frolicking in the rain and black people?’

Somebody, please explain to the connection between frolicking in the rain and black people?

Are there historical atrocities committed against black people by a white person(s) frolicking in the rain?

My questions are genuine.

The user then followed up with several videos explaining her first one and responding, doubling down and mocking Barrymore’s childhood saying ‘Aw poor Drew had a hard childhood, said the white woman to the black woman.’

She was incredulous at the reaction her video received, saying people wished to ‘dismiss my opinion on my own TikTok, but defend Drew.’

She claimed that Barrymore’s video of her enjoying the rain ‘opened the floodgates for people who disrespect black creators.’

The user concluded the video by saying ‘this is ridiculous, ya’ll are so reactionary… I said what I said.’

Barrymore had posted a similar video in May, where she again encouraged people to get out and enjoy the rain.