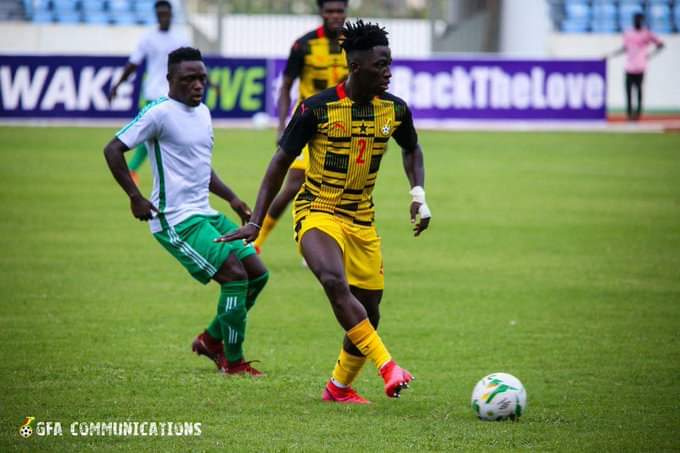 Baffuor in action for the Black Stars

Dreams FC defender Philemon Baffour has joined the Black Stars camp at the 2021 Africa Cup of Nations in Cameroon.

Baffuor, whose called-up raised eyebrows among the sports fraternity arrived late after he reportedly travelled to Portugal to sign a contract with Primeira Liga side Rio Ave.

This means that only Ajax midfielder Mohammed Kudus is left to join the team at the tournament.

The 21-year-old has been out of action after picking up a rib injury during Ghana’s final Group G 2022 Fifa World Cup qualifiers against South Africa at the Cape Coast Stadium in November 2021.

However, the Ajax midfielder was named in Black Stars’ final 28-man squad for the tournament.

Kudus is currently with his club teammates in Portugal for their winter break camp.

His imminent arrival is a big boost for the team following Monday’s loss to Morocco in Yaoundé.

Kudus and Baffour are likely to face Gabon on Friday and Comoros on Tuesday, both of which must be won by the Black Stars to avoid a shock first-round exit.