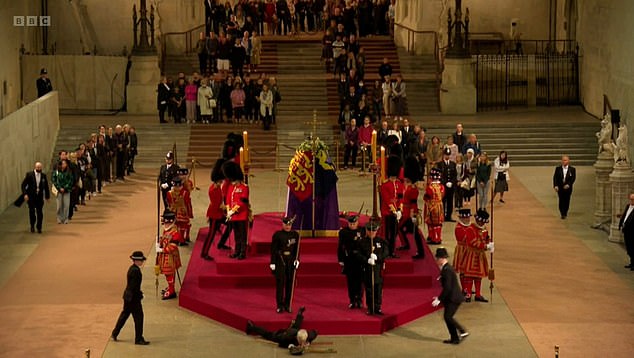 By Jamie Phillips For Mailonline

A guard has fainted off the podium while holding vigil next to the Queen‘s Coffin as she lies in state inside the Palace of Westminster.

Hundreds of thousands of mourners have been queuing to pay their final respects to the monarch following her death at Balmoral on Thursday.

But onlookers were aghast when a guard began swaying on his feet moments before he collapsed.

The man had moments earlier briefly stepped off the podium before retaking his place as other servicemen joined him for a changeover.

But seconds later he blacked out and fell forwards, landing sprawled on the stone floor to loud gasps from bystanders queueing to pay their respects.

The live stream also cut out for several minutes as police rushed to the man’s aid.

The Queen’s coffin, which has been placed on a raised platform called a catafalque, is being guarded around the clock by units from the Sovereign’s Bodyguard, the Household Division, or Yeoman Warders of the Tower of London.

It comes after crowds lined the streets of central London as she was moved from Buckingham Palace to Westminster Hall on Wednesday afternoon.

King Charles, William and Harry reunited to mourn and march behind the coffin it made its final journey out of Buckingham Palace at 2.22pm.

A short service was held involving the Royal Family at the Palace of Westminster, before members of the public were given access to pay their respects from 5pm.

Thousands of well-wishers have passed through the historic hall throughout the evening and into the early hours of this morning.

Mourners waiting to pay their respects have been given colour-coded wristbands in order to temporarily leave the queue to buy food and use the toilet.

Stewards staffing the route have also been advised to spot people who may be struggling, take them out of the queue for a ‘cup of tea’. They may then be allowed closer to the front.

The Palace of Westminster will remain open 24 hours a day until 6.30am on Monday – the day of the Queen’s funeral.