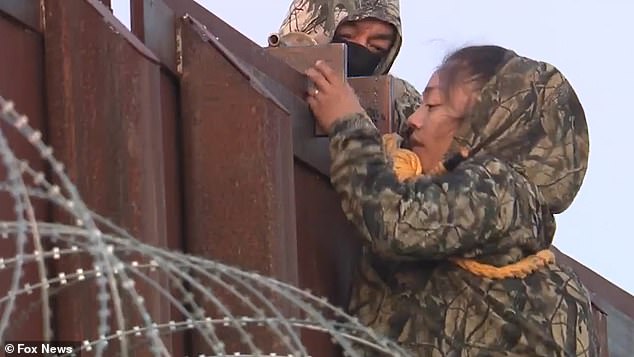 
Dozens of migrants dressed in camouflage were filmed scaling the border wall along Naco, Arizona, adding to 500,000 ‘gotaways’ who’ve entered the US so far this year.

The footage, captured by Fox News reporters, shows the immigrants climbing over a wall in Naco, as they use a rope to slowly descend past barbed wire before running off into US soil.

Fox reported that the operation, completed in broad daylight on Tuesday, took only 45 minutes and that none of the migrants were apprehended by border patrol.

Multiple senior Department of Homeland Security sources previously told the outlet that 2022 has seen about 500,000 ‘gotaways,’ migrants who have illegally crossed the border but were never caught.

EXCLUSIVE: In just a 45 minute span in Naco, AZ, our team saw over a dozen illegal immigrants dressed in camouflage use a rope to scale the border wall, then run into AZ. None were caught, making them “gotaways”. There have been over 500,000 gotaways so far this year. @FoxNews pic.twitter.com/kV29qahnEY

The migrants then ran off into Naco, Arizona, which has seen an influx of about 160, 000 undocumented immigrants in 2022

DHS officials have said that there were about 500,000 ‘gotaways’ so far this year

The man leading the migrants through the Naco wall told Fox that he runs similar operations there everyday, where DHS officials estimate that about 160,000 ‘gotaways’ have crossed the border.

The Border Patrol Union said in a statement that the high traffic in the area was a consequence of agents being pulled from the field to do administrative and processing duties instead.

Tensions are high over increased border crossing through Arizona, where Gov. Dough Ducey issued an executive order last month to create a make-shift border wall in Yuma to keep migrants from coming into the state.

Ducey has also joined his Texas counterpart, Gov. Greg Abbott, in busing undocumented migrants to left-leaning sancuatry cities in protest of the Biden administration’s failings over the border.

Vice President Kamala Harris insisted the U.S.-Mexico border is secure in a jumble of words on her ‘Meet the Press’ interview Sunday

Tensions are high over increased border crossing through Arizona, where Gov. Dough Ducey (above) issued an executive order last month to create a make-shift border wall in Yuma

Pictured: A group of migrants sitting behind the Yuma wall on August 23

Joe Biden appointed Vice President Kamala Harris to tackle the ‘root causes’ of immigration, but so far border agents have made over 2 million border apprehensions, an all-time record, this fiscal year, which ends in October.

That number surpassed the already-historic 1.7 million encounters in fiscal year 2021.

Despite the surge, Harris insisted the border was secure during a Meet the Press interview on Sunday.

‘The border is secure, but we also have a broken immigration system, in particular, over the last four years before we came in, and it needs to be fixed,’ she said, deferring the blame to the Trump administration.

‘We have a secure border in that that is a priority for any nation including ours in our administration,’ Harris added.

‘But there are still a lot of problems that we are trying to fix,’ she said, calling for a pathway to citizenship for undocumented immigrants.

The latest figure shows there were nearly 200,000 crossing at the border in July

So far this year, more than 1.8 million immigrants have crossed the southern border

In July there were nearly 200,000 encounters, a decline for the second consecutive month after four months of increases climaxing in May with a record-breaking 241,116 encounters.

August figures should be released soon.

With one month still left to go in the fiscal year, almost 750 border crossers have died making the dangerous journey northward to the U.S.