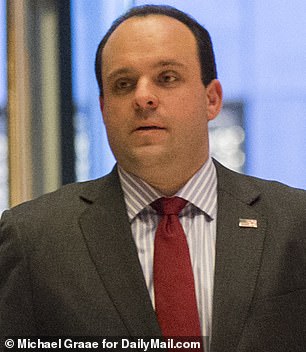 
40 subpoenas have been issued by the Justice Department that are seeking information about the actions of former President Donald J. Trump and his associates in relation to the 2020 election and January 6, 2021, attack on the Capitol.

Boris Epshteyn and Mike Roman who were both Trump advisers have had their phones seized as evidence reports the New York Times, however the new subpoenas have been issued for a wide variety of people around Trump, from low-level aides to his most senior advisers.

The action represents something of an escalation in the investigation coming just two months before the Midterm elections, following several months of relative calm.

The January 6 investigation coincides with a separate investigation into Trump’s storing of classified documents at his Mar-a-Lago home.

The Justice Department has been investigating the hundreds of rioters who were on the ground at the Capitol on January 6 for more than a year.

Donald Trump advisor Boris Epshteyn arrives at Trump Tower in Manhattan in 2016, left, Mike Roman, who was a Trump campaign strategist, has had his cellphone seized

Boris Epshteyn, seen right, was an advisor for President Donald Trumps 2020 presidential campaign. He has had his phone seized by the DOJ

40 subpoenas have been issued by the Justice Department that are seeking information about the actions of former President Donald J. Trump and his associates in relation to the 2020 election and January 6, 2021, attack on the Capitol

Other names the DOJ has been in contact with who are close to the former president include Dan Scavino, Trump’s former social media director.

Scavino began working for Trump at one of his golf courses and rose to become one of his most loyal aides. He continues to remain an advisor for Trump.

The Times reports how the Justice Department executed search warrants in order to seize electronic devices from people involved in the ‘fake electors effort’ living in swing states, including Epshteyn and Roman, who was a Trump campaign strategist.

Federal agents seized the electronic devices from the pair of advisers last week.

Stephen Miller, a former White House speechwriter and senior adviser under President Donald Trump, has also been subpoenaed by the Justice Department.

Other names the DOJ has been in contact with who are close to the former president include Dan Scavino, Trump’s former social media director, pictured here last week at a Trump rally

Bernard Kerik, who was a former New York City police commissioner was also subpoenaed by prosecutors with the U.S. attorney’s office in Washington

According to the Time, the subpoenas are looking to uncover information in connection with a plan to submit slates of electors pledged to Trump from swing states that had already been won by Biden in the 2020 election.

Trump together with his allied had promoted the idea of swing states being able to justify the blocking or delaying of Biden’s victory within the Electoral College during a joint session of Congress on January 6, 2021.

In addition to, and in what is a new line of inquiry, some subpoenas are looking into the activities of the Save America Political Action Committee which has been the main channel by which Trump has continued to fund-raise since leaving office.

The department was seeking information about the Save America PAC, alleged ‘fake electors,’ and communications between Miller and a long list of people.

The Justice Department’s revised focus on Trump’s fund-raising ability comes just as the House select committee investigating the January 6 attack has also raised questions about money Trump managed to pull in, all under the guise of ‘fighting election fraud’.

Founded days after the 2020 election, the Save America PAC has brought in more than $135 million, including more than $30 million transferred from Trump’s campaign committee.

The group has spent about $36 million, including about $3.1 million to various law firms for legal consulting, leaving it with a war chest of $99 million at the last reporting period in July.

The PAC also paid about $8.7 million to Event Strategies Inc, the company that helped organize Trump’s January 6, 2021 rally in DC, which immediately preceded the US Capitol riot.

The new subpoenas are another sign of escalating law enforcement scrutiny of Trump.

Last month, the FBI searched his Florida home as part of its investigation into whether he took classified records from the White House to Mar-a-Lago.

He is also facing a civil investigation in New York over allegations that his company, the Trump Organization, misled banks and tax authorities about the value of his assets.

Trump has previously slammed the FBI raid as ‘prosecutorial misconduct’ and political weaponization of the criminal justice system. He has repeatedly denied any wrongdoing.

In the 246 years since the United States was founded, no former president has ever been charged with a crime. However, former presidents do not have blanket immunity from prosecution.

On Monday Trump was spotted at his Washington DC area golf course after hitting back at the Department of Justice in their ongoing war over classified documents.

The former president led a procession of golf carts at his Loudoun County, Virginia, property on Monday morning after filing his latest motion slamming the DOJ.

Eric Trump, the youngest child from his first marriage, was in the passenger side alongside his father.

Trump posted on his Truth Social app late on Monday morning, ‘Working today at @TrumpWashingtonDC on the Potomac River. What an incredible place!’

His legal team blasted the DOJ earlier in the day in a new court filing rebutting federal prosecutors’ appeal to stop the appointment of a special master to review documents the FBI seized from Mar-a-Lago.

In the 21-page court rebuttal, he dismissed the investigation as a ‘misguided storage dispute’ while appearing vague on the nature of whether documents in his possession were classified.

He also defended his storage of the documents, claiming they were kept in a secure location – despite the DOJ claiming some top secret records were found in his personal desk drawers.

In their argument that Trump has discretion to deem certain documents ‘personal,’ his lawyers lean on a ruling concerning Bill Clinton’s retention of audio recordings after he left the White House in 2000. A judge sided with Clinton’s claim that they were personal and not subject to the Presidential Records Act.

That judge is Amy Berman Jackson, who was the subject of taunts and attacks by Trump and his allies while she presided over Roger Stone’s criminal trial.

However, Jackson had decided that the classification was ‘made by the President, during the President’s term and in his sole discretion,’ and there were no substantial national security objections raised over the recordings.

The Justice Department released a blistering legal filing that included a photo of documents seized during the August 8 search of Mar-a-Lago. Seen at right is a framed Time magazine cover

But Trump’s lawyers suggest that he has the standing ability to discern certain records as ‘personal’ even after leaving office, stating: ‘The former President has sole discretion to classify a record as personal or Presidential.’

They also appear to undermine the ex-president’s public proclamations that he has declassified the documents he took to Mar-a-Lago – and at one point make a legally muddled claim that he could determine classifications even after leaving office.

It comes after the DOJ argued that pausing its probe while the files are reviewed by a third-party would cause ‘irreparable harm’ to national security, according to a Thursday court filing. Federal prosecutors asked for exceptions to the order when it comes to documents marked ‘classified.’

Trump raised speculation on Sunday night when he flew into the Washington, DC area unannounced, still wearing his golf shoes, with no formal reason given for his arrival.

Share. Facebook Twitter Pinterest LinkedIn Tumblr Email
Previous ArticleJustice Department subpoenas more than 30 people in Trump’s orbit in January 6 probe
Next Article “This is the kind of ‘stunting’ we should be doing” – Nigerian man tells men as he shows off grocery shopping he did for his babe (VIDEO)