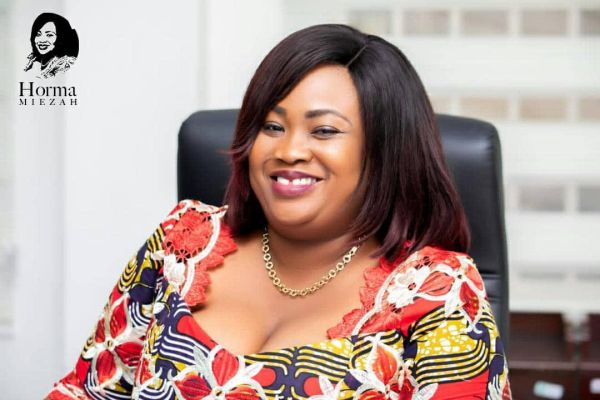 
The attention of Friends of Horma Akaisi Miezah (FOHAM) has been drawn to a misleading statement purported to be coming from Messers Ebenezer Cudjoean d David Oscar Amoah, who served as the Party’s 2020 NPP collation agents for parliamentary and presidentialelections respecti vely in Essikado-Ketan Constituency (EKC) and are also lead campaigners for her opponent, Charles Bissue.

In sum, they allege that Ms. Horma Miezah was caught in a leaked tape alluding that the NPP manipulated the 2020 parliamentary elections in favor of the incumbent MP, Hon. Joe Ghartey, during her engagement with some constituency polling station executives and electoral area coordinators between December 27, 2022 and January 2, 2023. As a result, we deem it appropriate to respond accordingly, as it borders on matters of Truth, Honesty, Misrepresentation, Party (NPP) cohesion and Image at large.

To start with, we condemn any attempts by both internal and external political detractors to bring down her hard-won and enviable reputation to the mud. It will not and cannot wash. Hence, we entreat her cherished and loyal supporters, the rank and file of the Party, especially those in the Essikado-Ketan Constituency and the general public to disregard and treat with the utmost contempt such a sinking and baseless allegation. This allegation is purely untrue, concocted and disingenuous just to cause disaffection and resentment against her very good self andher political ambition to contest for the Essikado-Ketan parliamentary seat in 2024 when nominations are opened. We say on authority, that this smear campaign is engineered and sponsored by her potential contender for Essikado-Ketan, the embattled Mr. Charles Bissue and spearheaded by the Deputy Constituency Secretary, Mr. David Oscar Amoah who is his lead campaigner. We wish to, emphatically, state that their allegations against Ms. Horma, the Deputy Director General for the National Lottery Authority (NLA), the Western Regional Treasurer, NPP and parliamentary hopeful is and remains the figment of the imagination of her political opponents and detractors in and outside the constituency.

To this end, we present the substance of the issue at stake:

1. Ms. Horma, in a spirit of Party fraternity and the yuletide, held a public gathering to share some Christmas gifts to our hard working Party faithfuls in the Essikado-Ketan constituency in her personal capacity.

2. At the said gathering, she took the opportunity to address the participants for more than 45 minutes.

3. During her address as the Party’s Regional treasurer, she reminded them, among others, on how the Party nearly lost the Essikado-Ketan constituency seat but for the vigilance of some Party hierarchies in the constituency and the region like herself.

4. In her speech, she recounted how the constituencyvoted massively for Nana Akufo-Addo but the same could not be said of the parliamentary candidate.

5. In 2019, she was part of those tasked by the regional body to coordinate Sekondi, Wassa East, Shama and the Essikado-Ketan constituencies. She was in fact the leader of the regional team that worked tirelessly in the listed constituencies to help retain the parliamentary seats for the NPP.

From the foregoing, we want to emphasize and clarify the thrust of her message with the following facts and figures from the 2020 presidential and parliamentary election results:

This Ms. Horma reiterated to buttress her point on the need for the party to choose a solid candidate that can help maximize the parliamentary votes going into the 2024 elections. So we are at a loss as to how anybody can attribute such statements to mean that she was stating that the NPP manipulated the 2020 parliamentary elections in Essikado-Ketan constituency.

We therefore call on those detractors to produce the said audio in their possession in which Ms. Horma is to have categorically stated that the NPP manipulated the 2020 parliamentary elections in favor of Hon. Joe Ghartey. Or they should desist from such evil and unhealthy internal Party discourse and campaign, which has already failed and pronounced dead on arrival. Even their said leaked tape attributed to Ms. Horma, as the basis of their unsubstantiated claims, is 1 minute 54 seconds in which there is not the slightest hint of their frivolous allegations. The said meeting was public and Ms. Horma entreated party faithfuls on the need to eschew petty bickering,work hard together and choose the right candidate for the constituency in 2024 to enable the NPP break the 8.

Furthermore, we also know the campaign of their“promise and fail” candidate in the constituency has flopped and therefore the reason why his campaigners have resorted to evil machinations and vilification against the obvious choice of the people in the constituency.

The press release dated January 8, 2023, which was signed by Oscar Amoah the assistant constituency secretary and lead campaigner for Charles Bissue is bogus, lacks merit and is not the true representation of the constituency executives as our investigations have revealed that none of the executives were aware of his malicious agenda to destroy the hard earned reputation of the Regional Treasurer and also cause disaffection to her and the party in general. We therefore call on the Constituency and Regional Party to immediately commence investigations into his actions and ensure the necessary sanctions are meted out to deter party executives from bringing the name of the party into disrepute for personal gains.

Finally, we wish to bring the attention of the people of Essikado-Ketan, Westerners and Ghanaians that the NDCs’ joining her internal political detractors to sing that baseless and discordant allegation chorus against her knowing very well that they had even withdrawn their petition in court due to lack of evidence, is evident of their fear that the candidature of Ms. Horma Miezah will spell doom for them in 2024. Hence supporting the candidature of an NPP candidate whose reputation has been heavily dented to make their work and campaign easy. Rest assured, the NPP, a party of repute, will not allow any candidate who in his pursuit for power will go to all ends, using dubious means such as even discreditingthe party and people he hopes to serve to lead any campaign in his name.