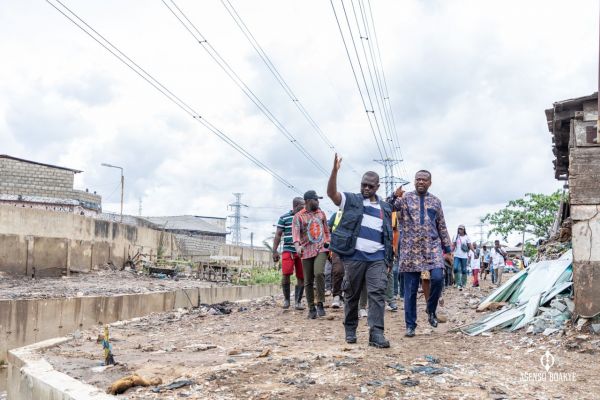 
The Ministry for Works and Housing has reminded Metropolitan, Municipal, and District Chief Executives (MMDCEs) to demolish all structures on waterways as instructed by President Nana Addo Dankwa Akufo-Addo recently.

He indicated that the government has invested a lot in dealing with issues of flooding, especially in the capital.

He said if not for the investment made, flood-prone areas within the capital, Accra, would have posed greater dangers than it has witnessed anytime there is a downpour.

He added that a task force has been formed to help in dealing with the issue and MMDCEs must comply.

“The district assemblies have the powers and we the citizens have to support them so that we can be successful. The President has given the directive and a task force has been set up at the office of the President, and I am very hopeful that this directive will be enforced to bring down a lot of structures to mitigate the effects of flooding, especially in Accra.”

He was speaking at the Meet the Press series organized by the Ministry of Information.

Meanwhile, he has revealed that it will cost the government over US$5 billion to solve Ghana’s perennial flooding situation.

President Nana Addo Dankwa Akufo-Addo last month directed Metropolitan, Municipal, and District Assemblies (MMDAs) in the Greater Accra Region to demolish all structures that cause flooding in the city.

He asked them to demolish the structures with immediate effect.

“MMDCEs have been charged to ensure that obstructions to the free flow of water as well as developments on waterways are removed immediately. MMDAs are also to ensure the strict adherence to developments in the planning laws of the country and sanction staff who issue permits for structures to be put on waterways to serve as a deterrent for those who engage in such acts”, Nana Akufo-Addo ordered.

Speaking at the commissioning of two IHC Beaver 50 dredgers and marine equipment of Dredge Masters Limited (DML), a subsidiary of the Jospong Group of Companies (JGC) in Accra, he said, “We will ensure that these directives are complied with. I have established a monitoring unit, and they will be reporting directly to me on the progress of the implementation of these measures. I am putting all MMDCEs on notice and will be held responsible for any breaches that result in damage as a result of flooding.”