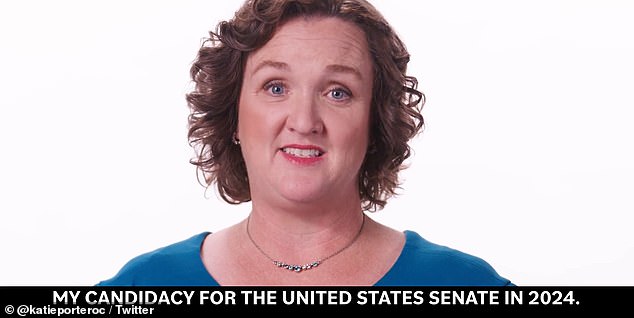 
Democratic Rep. Katie Porter announces she is running for California Senate seat held by 89-year-old Dianne Feinstein – as she faces questions over her retirement and her mental stamina

California Democratic Rep. Katie Porter announced Tuesday that she plans to run for U.S. Senate in 2024, despite the seat being currently occupied by fellow Democrat, Sen. Dianne Feinstein.

Porter – who went viral last week for reading the book, The Subtle Art of Not Giving a F*ck, on the House floor while the Republicans were in disarray over the speaker’s election – announced her bid in a video posted to Twitter.

‘California needs a warrior in the Senate – to stand up to special interests, fight the dangerous imbalance in our economy, and hold so-called leaders like Mitch McConnell accountable for rigging our democracy,’ Porter says in the spot. ‘Today, I’m proud to announce my candidacy for the U.S. Senate in 2024.’

The 49-year-old progressive made no mention of Feinstein, who will be 91 at the end of her current term – which concludes in January 2025 – and who has been plagued by news stories that raise questions about her mental fitness.

California Democratic Rep. Katie Porter (pictured) announced Tuesday that she plans to run for U.S. Senate in 2024, despite the seat being currently occupied by fellow Democrat, Sen. Dianne Feinstein.

This image of Rep. Katie Porter went viral last week, as she was captured reading the book, The Subtle Art of Not Giving a F*ck’ in the House chamber amid the House Republicans’ speakership drama. She announced a 2024 Senate run Tuesday

Still, Feinstein, 89, has yet to bow out of a run at reelection.

‘Everyone is of course welcome to throw their hat in the ring, and I will make an announcement concerning my plans for 2024 at the appropriate time,’ Feinstein said in reaction to Porter’s announcement, according to the Associated Press.

Porter was elected with a wave of female Democrats in 2018, helping her party win the House of Representatives from Republicans amid former President Donald Trump’s one term in office.

In the four years since, she’s become a prominent member of the party in part thanks to her memorable use of a white, dry erase board to question executives during Congressional hearings.

Incumbent California Democratic Sen. Dianne Feinstein has yet to announce if she’ll retire or run for reelection in 2024, despite the 89-year-old being plagued by news reports that question her mental acuity

Before coming to Congress, Porter was a law professor and holds degrees from Yale University and Harvard Law School.

Feinstein broke barriers throughout her career, first as the first woman to be elected mayor of San Francisco and later the first female member of the Senate Judiciary Committee.

She’s now the oldest member of the upper chamber and holds the record for longest-serving female senator in U.S. history.

Instead, he appointed Democratic Sen. Patty Murray of Washington, who’s 72.

Murray is the second-most senior Democrat in the Senate.

The role of president pro tempore is mainly ceremonial, except that the individual is in the presidential line of succession, after the vice president and House speaker.

Share. Facebook Twitter Pinterest LinkedIn Tumblr Email
Previous ArticleDamar Hamlin could be released from a Buffalo hospital in the next day or two
Next Article BBNaija star, Chichi breaks down in tears on IG live after being dragged for allegedly lying about her age (Video)