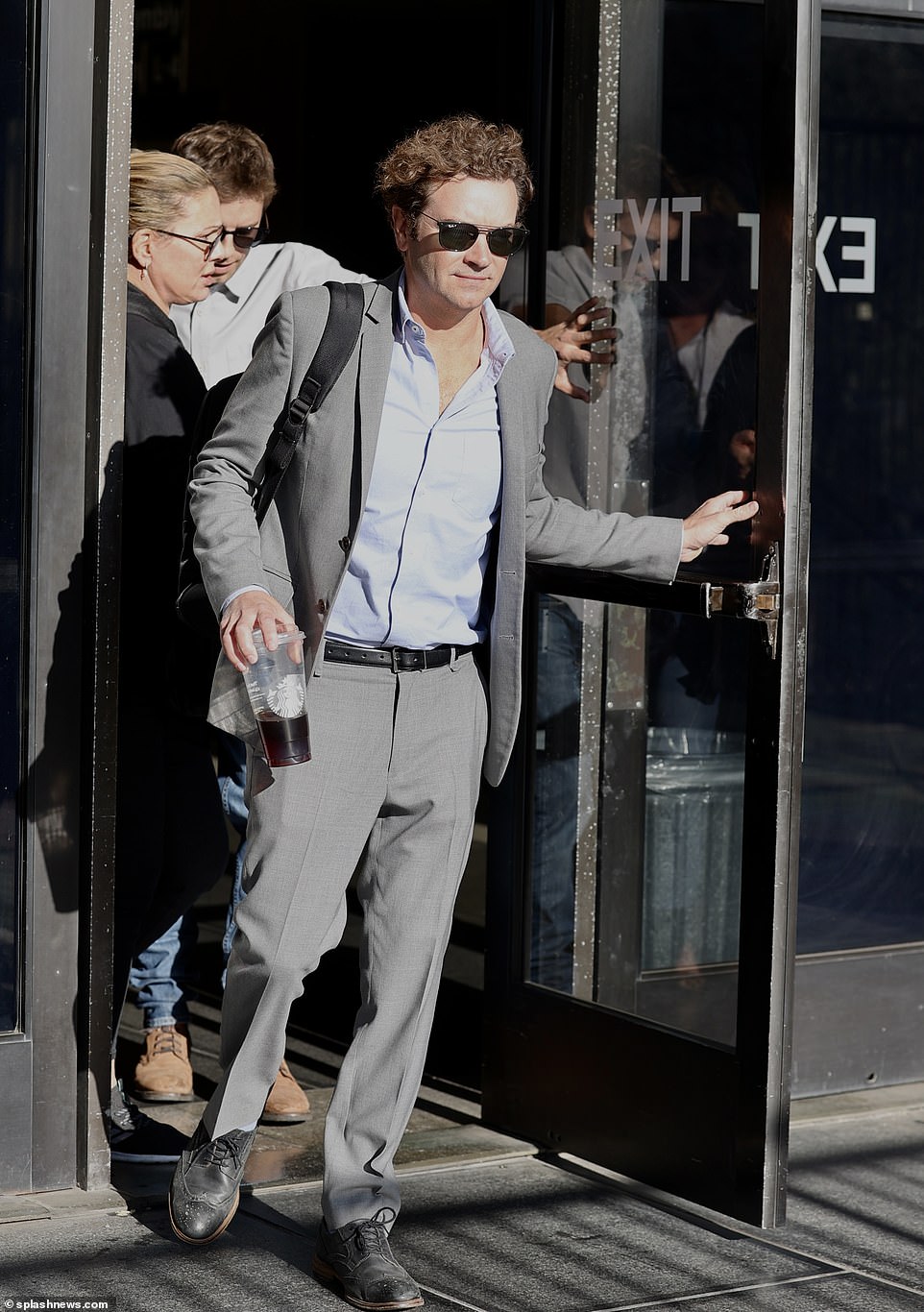 
Jurors in Danny Masterson’s trial were still deadlocked late on Friday on all three rape charges against him.

It saw the actor leaving Los Angeles County Court alongside his wife, Bijou Phillips, with a smirk on his face with court now not in session for another ten days.

At one point, Masterson could be seen in the court cafeteria looking extremely pleased with himself.

The judge told the court on Friday that despite deliberating since 9am Wednesday morning, the jury had informed her that they have been ‘unable to reach a unanimous decision on any of the counts.’

Judge Olmedo, responded by sending the jury a written note telling them that they have been deliberating for ‘insufficient time’ and ordering them back on November 28, the first date all the jurors will be available because of next week’s Thanksgiving holiday.

Masterson’s attorney, Philip Cohen, objected to the judge’s instruction, saying that the jury’s deadlock ‘comes down to do you believe the women or do you not?

At one point, Masterson could be seen in the court cafeteria looking extremely pleased with himself

Masterson is often photographed with a large iced coffee from Starbucks in-hand. He looked extremely relaxed on Friday

Masterson, who has worn a suit and tie for the entire trial, turned up with wife Bijou Phillips but tieless on Thursday, the day he many thought he would learn his fate

Several Scientologists and others turned up to support Masterson, a prominent member of the church, during the trial

Cohen expressed concern about sending the jury members away for 10 days during which they’ll be at Thanksgiving celebrations with friends and family ‘who have not been admonished’ (as the jurors have) to avoid reading or watching news reports about the highly-publicized trial.

And he asked Judge Olmedo to ‘bring the jury out and ask them…if there is anything else they could hear.’

Deputy District Attorney Reinhold Mueller told the judge that he agreed with her decision to order the jury to keep deliberating.

‘I think they need to spend more time,’ he told the court.

Judge Olmedo – saying the jury was deadlocked – overruled Cohen’s objection and declared that ‘there has been insufficient time for the jury’ to reach a verdict. Jurors need a unanimous decision to find Masterson guilty.

As for Cohen’s comments about jurors being tempted to talk about the case with loved ones or be subject to publicity about the trial, the judge said, ‘This case has been going on for over a month….The court has admonished the jury to avoid any discussion of the case or reading, TV or radio.’

Cohen asked for jurors to be brought back this Monday, November 21. But Judge Olmedo said that wasn’t possible since five jurors have family commitments over the Thanksgiving week.

His wife, actress Bijou Phillips, 42, has been with him in the courtroom throughout the five-week trial.

Masterson’s accusers – whom DailyMail.com is identifying only as Jane Does 1 through 3 – are all former Scientologists and are also suing him and the Church of Scientology in civil court, claiming that they’ve been harassed and intimidated since reporting him to police.

Jane Doe #2, testified that Masterson invited her to his house sometime in late 2003. She said that he gave her a glass of wine to drink and then ordered her, ‘like a drill sergeant,’ to remove her clothes and get in his jacuzzi

His accusers – whom DailyMail.com is identifying only as Jane Does 1 through 3 – are all ex-Scientologists and are also suing him and the Church of Scientology in civil court, claiming that they’ve been harassed and intimidated since reporting him to police.

Masterson did not take the stand and called no witnesses. Cohen attempted to get the charges tossed before they went to the jury but was unsuccessful.

In his summary, Cohen essentially accused the women of lying.

‘The government wants to win this case so badly that they have ignored the blatant, obvious and overwhelming contradictions and fabrications that each Jane Doe has given you,’ he told the court.

Scientology became the elephant in the room during the highly-publicized trial. Masterson’s lawyer, Philip Cohen, said the church was mentioned more than 700 times.

‘We’ve heard Scientology over and over again – it’s become the go-to excuse,’ he said

Cohen even tried – unsuccessfully – to get the start of the trial delayed until after the recent LA Mayoral election because, he said, anti-Scientology TV ads made by rival candidates Karen Bass and Rick Caruso could prejudice the jury against his client, who is a prominent member of the church.

All three women who accused Masterson of rape testified that the reason they took so long to report him to the police was their fear of retribution from the church.

They said that church officials warned them not to use the word rape, that turning in a fellow Scientologist to law enforcement was considered a ‘high crime’, and if they disobeyed that doctrine, they could be declared a ‘suppressive person’, cast out by the church and left alone, cut off from family and friends.

The church itself insists that members are encouraged to report crimes to the authorities.

Jane Doe 1 had told the court that in April 2003 she was at Masterson’s house where he gave her a fruity red drink with vodka that made her feel woozy, then threw her in his Jacuzzi, carried her upstairs where she passed out and woke up to find him raping her.

She fought back, pushing a pillow into his face, she told the jury. But he shoved it back into her face, smothering her and she blacked out again.

When she woke, Masterson opened a bedside drawer and pulled out a gun which he brandished, telling her, ‘Don’t f***ing move,’ she claimed.

Jane Doe 3 – who lived with Masterson for six years – was only 17 when she met him and he persuaded her to join the Church of Scientology, the court heard.

About a year into their relationship, he became very controlling…and very aggressive sexually – she would often wake up at night and he would be on top of her, having sex with her, she told the court.

In one such incident in November 2001, when she woke up to find him having sex with her, she told him no and tried to push him off, the court heard.

When that didn’t work, she pulled his hair. But he retaliated by hitting her across the face and calling her ‘white trash,’ said prosecutors.

Jane Doe 2 met Masterson at a bar in 2003 and gave him her phone number. He called her and invited her to his home. She went, and, the court heard, after a stint in his Jacuzzi she found herself in his bathroom shower with him where he ‘suddenly shoved his penis into her vagina….She said no, I told you no sex.’

They ended up in Masterson’s bed where, despite her protests, he flipped her over and started pounding her from behind ‘like a jackhammer,’ she testified, adding that she felt ‘like a limp rag doll.’

Defense attorney Cohen challenged ‘inconsistencies’ in the women’s testimony and statements to law enforcement, accusing them of ‘blatant fabrications.’

And he asserted that the three had ‘colluded,’ choreographing their rape stories to help get Masterson convicted – which in turn could help them win a big cash payout in the civil lawsuit they have brought against the actor and the church.

But Cohen in his summing up pointed out what he called ‘inconsistencies’ in all the women’s accounts.

He said that Jane Doe 1 claimed Masterson pulled a gun on her. Yet she didn’t tell either of the two police officers who first interviewed her about a gun. ‘Did the officers get it wrong – or is she being untruthful,’ he asked.

Defense attorney Philip Cohen, asking for the case be ruled a mistrial

And in one account she gave of the alleged rape, she said she woke up next to Masterson, but in the other she said he was not in the house when she woke up. ‘Can we believe her?’ asked Cohen.

He said that Jane Doe 3 had continued seeing and having sex with Masterson after the alleged rape.

Moving on to Jane Doe #2, Cohen pointed out yet another inconsistency, saying that she told cops Masterson raped her between October and December 2003 – yet her friend Rachel Smith testified that Jane Doe 2 disclosed it to her in ‘early 2003.’

Repeating his assertion throughout the trial that the three alleged victims had ‘colluded’ with their rape stories in pursuit of a hoped-for cash win in the civil lawsuit they’re currently in with Masterson, Cohen said, ‘All three women spoke to each other before anyone reported to the police.’