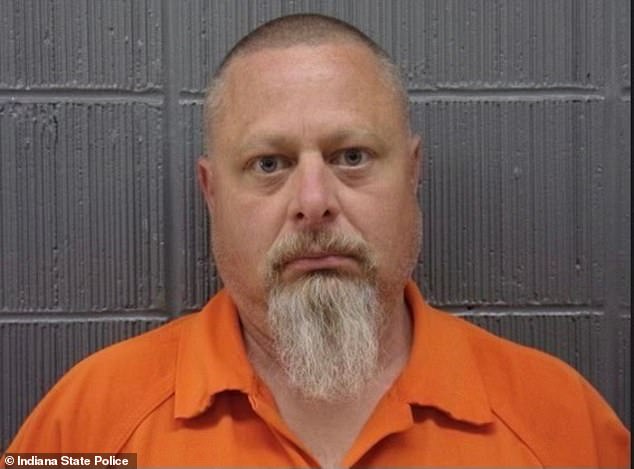 
An Indiana man charged with murdering two teenage girls in 2017, in a case which transfixed the nation, posed for a photograph in front of a ‘wanted’ poster issued by police searching for the suspect, it has emerged.

Richard Allen, 50, was arrested on Wednesday and charged two days later with killing 13-year-old Abigail Williams and her friend Liberty German, 14, in February 2017.

The two girls had gone for a walk together along a bridge in Delphi, Indiana, but failed to show up to meet their parents. They were documenting their walk on Snapchat, and police released grainy footage of a man walking towards them, and a voice in the distance – footage which intrigued amateur sleuths.

The bodies of the teenage girls were found close to the bridge the day after they vanished, and several suspects were named over the years, but no arrests made until last week.

The case had haunted Delphi, home to almost 3,000 people, ever since.

On Monday, the owner of the bar in Delphi where Allen, a pharmacist, used to drink with his wife Kathy told of his shock at the arrest.

Bob Matlock, owner of JC’s Bar – which closed in December 2021 – said Allen even posed for a photo in front of the ‘wanted’ picture.

Richard Allen, 50, was charged with two counts of felony murder for the deaths of Liberty German, 14, and Abigail Williams, 13

The photo shows Richard Allen, 50, smiling with his wife – while over his shoulder, a police sketch strongly resembling him is posted on the wall inside Bob Matlock’s bar

Allen was photographed sitting close to this sketch. It is one of several released following the February 2017 murders

Abigail Williams, left, and Liberty German, right, were murdered in February 2017 after going for a walk

‘I just couldn’t believe it when they said they arrested him,’ said Matlock.

‘There wouldn’t have been any inkling to anyone that knew him that would expect him to do something like that. He just didn’t seem that type of person. But… you never know.’

Matlock, 75, told The Daily Beast that he saw Allen and his wife as ‘good friends’, who were active in the community and the bar’s pool league.

‘We were all sitting at the table there, we were having a pool night, and just having fun – we were snapping pictures and everything,’ said Matlock, explaining that Allen posed in front of the ‘wanted’ sketch.

‘Every business in town had those [sketches] up. It just happened to be, he was sitting there at the time.

‘But to me, that did not resemble Rick.

‘My other patrons around town [would] come in for breakfast or lunch, everybody would say: ‘Christ, that don’t look like anybody,’ or, ‘It could be anybody.’

It is unclear when and where the photo of Allen by the sketch was taken.

The version of the suspect sketch in the image was not released until April 2019, so the photo would have been taken at least two years after the murders.

Matlock said they all discussed the case, but did not want to go into detail as they knew the families of the victims.

‘He would come in and we would always talk about the girls and everything,’ said Matlock.

‘We would carry on conversations about it, he would say, you know, it’s such a tragedy, and we’d say we felt sorry for the families and all that, but we tried not to talk about it too much because we all knew the families, and were friends with the families.’

Anna Williams, mother of Abigail, told DailyMail.com they did not know Allen.

She said she did not want to discuss his arrest.

He is not cooperating with authorities, according to WISHTV.

He does not appear to have a prior criminal record and previously worked at the local CVS.

He told a press conference on Monday it was ‘disappointing’ that the suspect is a local resident, and said he can now bring the evidence against Allen to court.

Asked whether anyone else may have been involved in the murders, McLeland said: ‘We have not closed the door on this case.’

It remains unclear what led police to ultimately arrest Allen. State police will not be releasing evidence in the case, under a court order.

A probable cause document has been temporarily sealed, with McLeland saying he requested the documents be sealed due to the ‘extra scrutiny’ of the case.

McLeland said he wanted to protect the integrity of the investigation.

‘The investigation is far from complete, and we will not jeopardize its integrity by releasing information before it’s time,’ added Doug Carter, superintendent of Indiana State Police.

‘These are folks who have devoted their entire lives to a conclusion — in other words, a guilty verdict.’

Allen has long been presumed to be the unidentified man seen approaching German and Williams, when they were crossing the Monon High Bridge in the woods outside Delphi in February 2017.

The bridge is located just a few miles from Allen’s home — which is also just a half-mile from the middle school the two teens attended.

Libby had shared a ‘snap’ on Snapchat of herself walking along the railroad tracks on the day of her murder, with the social media updates causing a sensation that made the case one of the United States’ most notorious unsolved murders.

The girls’ bloodied bodies were found about a half mile from the bridge.

Following the news on Monday, Kelsi German, the sister of Libby German, tweeted: ‘We got him.’

After news of Allen’s arrest broke on Friday, a disturbing photo emerged showing his own daughter posing in the same spot where the teenage victims were last seen alive.

Brittany Zapanta, 28, is pictured posing on the Monon High Bridge.

The photo was posted to Facebook by Allen’s wife Kathy, 50, in 2018 —just over a year after the girls disappeared in February 2017.

It’s unclear when the photo was taken.

There is also no indication as to who took the snap on the Monon High Bridge Trail.

The photo of Allen’s daughter, 28-year-old Brittany, was posted to Facebook by his wife Kathy, 50, in 2018 – just over a year after the girls disappeared in February, 2017

Libby German was filmed by her friend and fellow victim Abigail Williams in February, 2017, moments before they were murdered –

The arrest of Allen could be the end of a years-long investigation during which numerous possible leads have led nowhere, and police have remained tight-lipped about details of the case.

Exactly how the girls died remains unknown to the public, and the state their bodies were discovered in also remains shrouded in mystery.

Over the summer, the details of a search warrant revealed that Libby and Abigail were found covered in blood, and that their killer appeared to have taken a souvenir of some sort from the murder site.

The warrant, obtained by the Murder Sheet podcast and released to Indianapolis FOX59, offered no further detail on what the souvenir was – although it did say that ‘the rest of [the girls’] clothing was recovered,’ implying that the killer had taken something they’d been wearing.

The murderer also reportedly ‘staged’ the girls’ bodies in a particular way after killing them – although it remains unclear exactly how he did this.

Investigators believed photographs or videos were likely shot of the grotesque set-up to ‘memorialize’ the crime scene.

Allen is pictured here with his wife, Kathy, in an undated picture. They live just miles from the bridge from where the two teens disappeared in 2017

Allen is seen with his wife Kathy in an undated photo. He does not appear to have a prior criminal history and was known locally for working in the local CVS

The 2017 murder of Abby and Libby became notorious after investigators released chilling footage the girls recorded of a man following and approaching them across the Monon High Bridge.

A heavily-built man in jeans and a blue jacket could be seen approaching the girls.

In a brief snippet of audio that was released, the man could be heard saying to the girls: ‘down the hill.’

The full clip is reportedly 43 seconds long, but its contents are believed to be too disturbing to share in full.

Over the years numerous people have been put forth as possible suspects in the case.

Ron Logan, who died in 2020, had long been the prime suspect.

The girls’ bodies were discovered on his property – just 1,400ft from his house – and it was revealed over the summer that his alibi for the day of the murder did not line up.

His home was searched and he was arrested shortly after the killings, but he was released and never charged.

The voice in the clip was described as being ‘not inconsistent’ with that of Logan, the FBI investigation concluded.

A brief clip of the man walking towards the girls on the trail was released too.

Another man, Kegan Kline, 27, of Peru, Indiana, was also previously named as a suspect in the murders.

He is said to have admitted talking to Libby German using a fake Instagram profile called Anthony_shots.

Kline – who is heavy-set and pasty-faced – used an image of a ripped and muscular young man to trick underage girls into speaking to him.

He is said to have arranged to meet with Libby on the Delphi High Bridge the day before she was murdered while walking along it.

But he is also said to have shared his Anthony_shots password with others – including his father – and said his father could be a prime suspect in the killings.