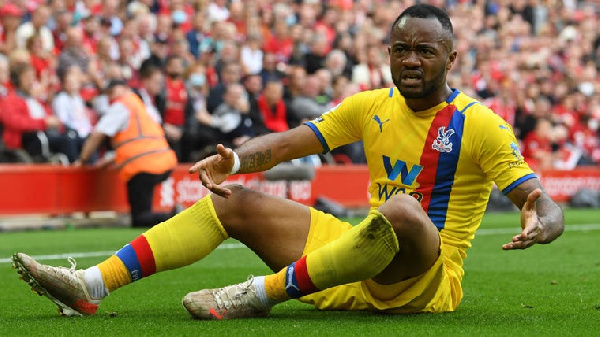 After Ghana’s disappointing exit from the ongoing Africa Cup of Nations in Cameroon, the forward, who was with the Black Stars at the continental showpiece, has made a prompt return to England, opening a possibility of featuring in the upcoming Premier League fixture.

The Eagles are set to host the Reds for a matchday 23 showdown at Selhurst Park.

“We don’t know, we still have a couple of days before the game. He was in today and took part in the first part of training. We will have a discussion tomorrow [Saturday] to find out how he’s feeling,” Vieira said at a press conference on Friday when asked of the Ghanaian’s possible involvement in Sunday’s tie.

Ayew featured in all three group games for Ghana as they finished bottom of Group C to exit Afcon.

On Tuesday, he was in action when the Black Stars fell to a shock 3-2 defeat to tournament debutants Comoros in their last game.

Liverpool, on the other hand, are still without three players at Afcon following progression of their national teams to the Round of 16 of the tournament.

Senegal talisman Sadio Mane is set to lead the Teranga Lions into their clash with Cape Verde on Tuesday, Egypt will be counting on Mohamed Salah for their encounter with Cote d’Ivoire, while Naby Keita will captain Guinea for their duel with Gambia on Monday.

Vieira, however, is not getting carried away by the trio’s absence for the Reds on Sunday.

“It’s not just about those two players they’re missing. Obviously, with those two [Salah and Mane] they’re stronger but there are still players playing really well with fantastic talents,” said the former France and Arsenal midfielder.

“The best way to describe this team before talking about the individual talent is as a team. This is a strong team.”

Palace are currently 11th on the league table while Liverpool sit higher up in second position.