Covid US: 1,036 hospitals in staffing crisis as Omicron forces staff into isolation 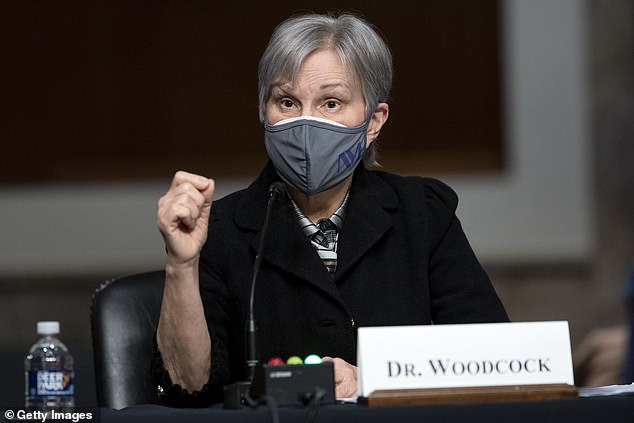 On Thursday, 1,036 hospitals reported crisis staffing shortfalls, roughly a quarter of the nation’s 5,000 hospitals and in line with recent trends, according to data from the Department of Health and Human Services.

Though the Omicron variant seems milder than prior COVID-19 strains, its explosive transmission is forcing millions to stay home from work, straining transit, EMS, and police services from New York to Los Angeles, and many places in between.

On Tuesday, Janet Woodcock, the acting head of the Food and Drug Administration, told Congress that the nation should accept that Omicron will infect ‘most people’, saying the focus should now turn to ensuring critical services can continue through the surge.

‘I think it’s hard to process what´s actually happening right now, which is: Most people are going to get COVID, all right?’ she said. ‘What we need to do is make sure the hospitals can still function – transportation, other essential services are not disrupted while this happens.’

At Johns Hopkins five-hospital system in Maryland and Washington DC, there have been recent days when hundreds of workers have called in sick, Dr. Gabe Kelen told CNBC.

‘Given how crushed health-care services are right now, to lose nurses for even a five-day period should they have had a mild infection is just a tremendous, tremendous loss,’ Kelen said.

‘You can just see how astoundingly hampered the operations are at a time when institutions like ours need to ramp up staffing,’ he added.

In California, where a staggering 57 percent of hospitals are reporting critical staffing issues, state officials are now telling hospital administrators to order staff back to work immediately if they are positive for COVID but asymptomatic.

‘Hospitals have to exhaust all other options before resorting to this temporary tool. Facilities and providers using this tool, should have asymptomatic COVID-19 positive workers interact only with COVID-19 positive patients to the extent possible,’ a statement issued by the California Department of Public Health on Saturday read.

The news sparked outrage among advocates for health workers, who argue hospital staff has carried the weight of the pandemic on their shoulders and are now being put at risk, along with their patients.

‘Healthcare workers and patients need the protection of clear rules guided by strong science. Allowing employers to bring back workers who may still be infectious is one of the worst ideas I have heard during this pandemic, and that’s really saying something,’ Bob Schoonover, President of SEIU California told CBS Sacramento.

A woman gets registered for Covid-19 testing at the Times Square Subway stop on January 4, 2022, in New York City

In New York City, employee shortages are causing delays in trash and subway services, and diminishing the ranks of firefighters and emergency workers.

Airport officials shut have down security checkpoints at the biggest terminal in Phoenix and schools across the nation struggle to find teachers for their classrooms.

‘This really does, I think, remind everyone of when COVID-19 first appeared and there were such major disruptions across every part of our normal life,’ said Tom Cotter, director of emergency response and preparedness at the global health nonprofit Project HOPE.

‘And the unfortunate reality is, there´s no way of predicting what will happen next until we get our vaccination numbers – globally – up.’

First responders, hospitals, schools and government agencies have employed an all-hands-on-deck approach to keep the public safe, but they are worried how much longer they can keep it up if infections keep rising.

In Kansas’ Johnson County, paramedics are working 80 hours a week. Ambulances have frequently been forced to alter their course when the hospitals they’re heading to tell them they’re too overwhelmed to help, confusing the patients’ already anxious family members driving behind them.

When the ambulances arrive at hospitals, some of their emergency patients end up in waiting rooms because there are no beds.

Dr. Steve Stites, chief medical officer for the University of Kansas Hospital, said when the leader of a rural hospital had no place to send its dialysis patients this week, the hospital’s staff consulted a textbook and ‘tried to put in some catheters and figure out how to do it.’

Medical facilities have been hit by a ‘double whammy’ of rising hospitalizations and staffing shortages, he said.

The number of COVID-19 patients at the University of Kansas Hospital rose from 40 on December 1 to 139 on Friday. At the same time, more than 900 employees have been sickened with COVID-19 or are awaiting test results – 7 percent of the hospital’s 13,500-person workforce.

‘What my hope is and what we’re going to cross our fingers around is that as it peaks … maybe it´ll have the same rapid fall we saw in South Africa,’ Stites said, referring to the swiftness with which the number of cases fell in that country. ‘We don’t know that. That’s just hope.’

In downtown Boise, Idaho, customers were queued up outside a pharmacy before it opened Friday morning and before long, the line wound throughout the large drugstore. Pharmacies have been slammed by staffing shortages, either because employees are out sick or have left altogether.

Pharmacy technician Anecia Mascorro said that prior to the pandemic, the Sav-On Pharmacy where she works always had prescriptions ready for the next day. Now, it’s taking a lot longer to fill the hundreds of orders that are pouring in.

‘The demand is crazy – everybody´s not getting their scripts fast enough so they keep transferring to us,’ Mascorro said.

In Los Angeles, more than 800 police and fire personnel were sidelined because of the virus as of Thursday, causing slightly longer ambulance and fire response times.

In New York City, officials have had to delay or scale back trash and subway services because of a virus-fueled staffing hemorrhage.

The Metropolitan Transportation Authority said about one-fifth of subway operators and conductors – 1,300 people – have been absent in recent days. Almost one-fourth of the city sanitation department’s workers were out sick Thursday, Sanitation Commissioner Edward Grayson said.

The city’s fire department also has adjusted for higher absences. Officials said Thursday that 28% of EMS workers were out sick, compared with about 8% to 10% on a normal day. Twice as many firefighters as usual were also absent.

In contrast, the police department saw its sick rate fall over the past week, officials said.

At Phoenix Sky Harbor International Airport, two checkpoints at the airport’s busiest terminal were shut down because not enough Transportation Security Administration agents showed up for work, according to statements from airport and TSA officials.