Covid continues to collapse – so how prevalent is virus in YOUR area? 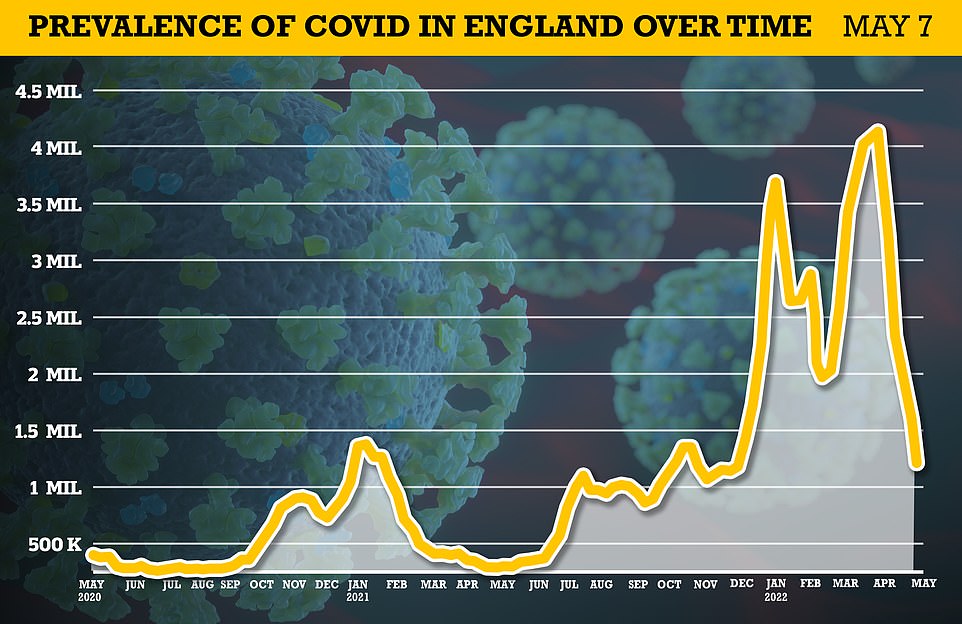 
Covid continues to collapse – so how prevalent is virus in YOUR area? ONS says just one in 45 people (1.2m) were infected in England last week as rates fell to lowest level in five months BEFORE Omicron took off

Covid levels continued to crumble in England last week, falling to their lowest levels since the start of December before Omicron took off.

The Office for National Statistics (ONS) estimates 1.2million, or one in 45 people, were carrying the virus on any given day in the week to May 7, down a quarter on the previous week.

It marks the fifth week in a row that the ONS’ weekly infection survey — now the best barometre of the outbreak — has reported a week-on-week fall in cases, despite no Covid restrictions being in place.

The Government is relying on the study, based on swabs of 120,000 random people, to track the virus now that free testing has been axed for the vast majority of Britons.

Today’s estimate for England is the lowest since the week ending December 16, when 1.2m people were also estimated to have been infected.

At that point, the Omicron strain was just starting to take off and in the following weeks there were mounting calls to follow some EU countries in enforcing another lockdown.

Meanwhile, the ONS estimates one in 35 people were carrying Covid in Wales and Scotland last week and one in 55 in Northern Ireland.

Sarah Crofts, head of analytical outputs for the COVID-19 Infection Survey, said: ‘It is encouraging to see infections continuing to decrease across the UK, with rates now at their lowest since mid-December.

‘In England while infections are around a third of the level seen a month ago, rates do remain high overall. I want to thank all of our participants for their continued dedication to this vital piece of surveillance.’

The Office for National Statistics (ONS) estimates 1.2million, or one in 45 people, were carrying the virus on any given day in the week to May 7, down a quarter on the previous week

Wales has seen infections drop for the fourth week in a row, with 88,300 people estimated to have Covid in the week to May 7, down from 131,600, and also the lowest since the week to December 16.

Meanwhile, in Scotland, Covid infections are now at their lowest since the week ending December 23, with 158,200 people carrying the infection last week.

The virus is least prevalent in Northern Ireland, where infections have dropped to their lowest level since early November.

In the most recent week, the percentage of people testing positive continued to decrease in all regions of England, but there are some signs the fall is levelling off in London and the East Midlands.

The virus is still most prevalent in the East Midlands, where 2.7 per cent, or one in 37, were infected last week, followed by the North West, where it was one in 41.

London and the North East have the lowest rates, with just one in 52 people estimated to have been ill with Covid.

The percentage of people testing positive for coronavirus also decreased in all age groups in England, except for those in school Year 7 to school year 11, for whom the trend was uncertain.