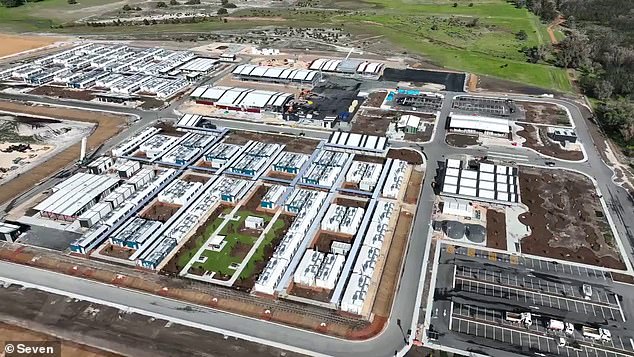 A brand new $200million quarantine facility purpose built for overseas and returned travellers will go to waste as the Western Australian government decides on an alternative use.

Construction of the Morrison Government’s Bullsbrook Centre for National Resilience on Perth‘s outskirts is nearing completion and will be handed over to the state next month.

The 500 bed facility was intended for overseas travellers to undergo their 14 days of mandatory isolation after they arrived on Australia’s shores.

But the facility will remain empty with its future now hanging under a cloud after Australia recently scrapped quarantine and vaccination requirements for overseas arrivals.

The WA government has only committed to funding the cost of operating the facility for 12 months.

‘This was a decision of the Morrison government to build this. It was on the basis that we may well need it,’ he told reporters on Sunday.

‘At this point in time, it’s not needed for quarantine purposes but it may be needed for some of those purposes in the future. So the state government has agreed to operate it for the course of one year.

‘What we will do is look for a purpose.’

One option being considered is short-term accommodation for skilled workers to fill critical shortages in the healthcare, hospitality and construction industries.

‘We all know one of the biggest problems we face is not enough people for the jobs that are out there,’ Mr McGowan said.

From our drone – the massive 500 bed Quarantine facility nearing completion in Bullsbrook, north of Perth. Built by the federal government, intended for overseas arrivals but now looking for a new use #7NEWS @7NewsPerth pic.twitter.com/lHdV1LD7MG

‘Skilled labour coming in that might need somewhere to stay is one of the things we are looking at.

‘We’re currently going through a process to work out how that might happen and whether it’s actually feasible or not, considering the location of the centre.’

Mr McGowan previously suggested the facility could also be used for disaster relief.

‘As you know every Christmas we have disasters, we have fires and cyclones. Perhaps there is a use there at some points during the year,’ he recently told parliament.

‘Maybe there is some use we can put it to outside of a pandemic or a disaster (but) we haven’t quite landed on what that is yet.

‘We’re seeking feedback from people as to what it can be used for.

‘It’s not in the heart of the city. So you know, in terms of backpackers or something, it can’t really be used for that.’

There are also calls for the facility to help ease Perth’s dire rental market with just 2300 properties available for lease earlier this month, according to REIWA, the state’s real estate institute.

The Victorian government are in talks with the federal government about using Melbourne’s quarantine hub to accommodate refugees fleeing war-torn Afghanistan and Ukraine.

The Queensland government independently contracted their own Wellcamp Covid quarantine facility outside Toowomba, in addition to the one still being built by the Commonwealth, which is near Brisbane Airport.

Wellcamp also has 1000 beds and opened in February but as of last month had reportedly hosted only 504 travellers.

Share. Facebook Twitter Pinterest LinkedIn Tumblr Email
Previous ArticleDeath toll from Russian strike on residential building in Donetsk rises to 34
Next Article “No more jazz in Yorubaland. Couldn’t they suspend the rain?” – Netizens react to video of people participating in Ojude Oba festival inside the rain