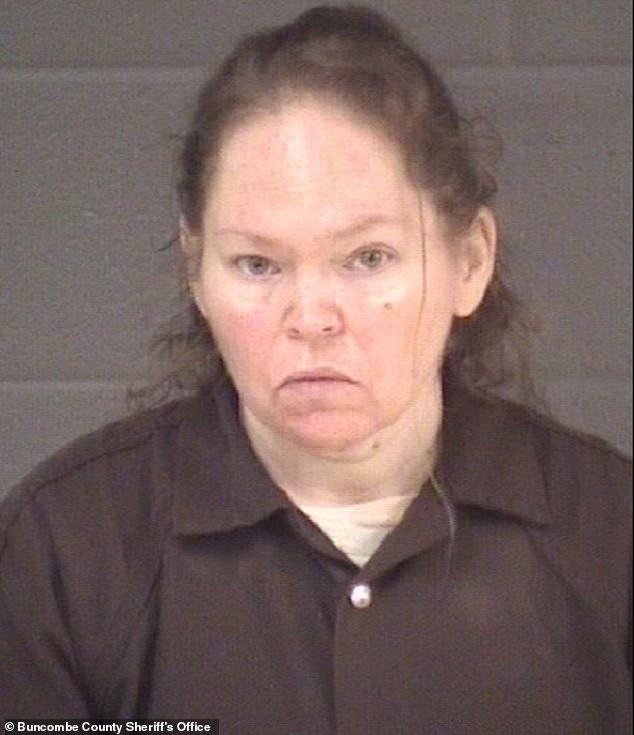 
A North Carolina couple who sent police on a ‘wild goose chase’ after being arrested in the disappearance of the women’s grandmother had their fowl scheme unravel when a pet duck led cops to her decaying body.

Angela Wamsley, 46, and her boyfriend Mark Barnes 50, were arrested in December 2020 on a slew of charges – including fraud, animal cruelty, and drug and weapons possession – following the disappearance of Nellie Sullivan, Wamsley’s grandmother.

Sullivan, who suffered from ailing health including dementia, had vanished years before she was determined to be missing in 2020, according to a neighbor.

Cops finally cracked the cold case with more than a bit of luck this month at the couple’s former property at 11 Beady Eyed Lane in Candler, 10 miles west of Asheville.

Buncombe County Sheriff’s Office Sgt. Mark Walker said they learned about a body when the current residents at the trailer where Wamsley and Barnes once lived were chasing after their pet duck.

‘Apparently, the duck ran underneath the trailer … and as they were chasing after their pet duck, they ran across the container that Nellie Sullivan was located in,’ Walker told WLOS.

‘If I could give that duck a medal, I would,’ Walker quipped.

An autopsy confirmed the body was Sullivan’s, Walker said.

Wamsley and Barnes had continued to collect Sullivan’s Social Security and retirement benefits while also continuing to fill her prescriptions after she was killed, Walker said.

The couple, who are in prison for previous drug-related convictions, were charged with first-degree murder, according to Buncombe County Sheriff’s Office.

Angela Wamsley, 46, was charged on Thursday in North Carolina after Buncombe County Sheriff officials discovered the body of her late grandmother, Nellie Sullivan, under the mobile home she was living with along her boyfriend. Wamsley, who is already in jail for drug-related and animal abuse offenses, was later charged with first-degree murder

Mark Barners, 50, was also charged with murder. He has also been accused of leading police on a ‘wild goose chase’ when he knew where the victim’s body was the entire time

Sullivan had been reportedly living with the couple before her murder.

‘After a couple of months she got real sick, and she went into the hospital, and they put her in a nursing home,’ neighbor Belinda Moody said at the time, adding that Sullivan had been missing for ‘several years.’

‘They brought her back and then we didn’t see her after that.’

‘She was a sweet little, old lady,’ Moody added. ‘She’d give you the clothes off her back, if she could. She made my daughter a Halloween black cape out of a shower curtain she had. She just was very kind.’

Authorities accused Barnes of leading them on a ‘wild goose chase’ as they sought to collect evidence in the case. The search made sheriff deputies dig ‘for several days in a site that he knew she was not located,’ Walker wrote in an arrest report.

Other charges against the couple, who have both been in custody since December 2020, have been spread out across the last two years due to the victim’s missing status.

Wamsley was arrested on December 17, 2020, and charged with misdemeanor animal cruelty, unlawfully reconnecting a utility, two counts of abandonment of an animal, possession of a schedule three controlled substance, possession of a drug paraphernalia and possession of a Synthetic Cannabinoid.

‘Detectives executed multiple search warrants and seized documents relevant to the case at the onset of the investigation,’ the sheriff’s office wrote at the time.

Barnes, who had previously been convicted of another felony, was charged with the same crimes, along with two counts of misdemeanor animal cruelty instead of one.

He was additionally charged with possession of a firearm by a convicted felon.

Prior to their arrest, the couple had reportedly been regular heroin consumers for years, according to their neighbors.

‘Since the beginning of this investigation we have sought to locate Ms. Sullivan’s remains, afford her the respect she deserved, and restore dignity to the life she once lived,’ said Angie Tullis, Captain of the Criminal Investigation Division at the Buncombe County Sheriff’s Office.

‘We are dedicated to utilizing all available science, technology, and investigative skills necessary for justice to be served in this case,’ she added.

Prior to her death, Sullivan had been suffering health issues, including dementia.

‘Instead of receiving the care she needed from those that are supposed to love her the most, she received the exact opposite in the worst possible way,’ Walker said.

The duck, belonging to the couple, found Sullivan’s body under the mobile home of the defendants in a container

Wamsley was also charged with ‘assault with a deadly weapon on a Detention Officer at the Buncombe County Detention Facility in January of 2021,’ the sheriff’s office wrote.

Both individuals are set to make their first court appearance on May 13, according to online court records.

Appearances for all other charges will take place on May 31 and the couple will face trial separately for those.