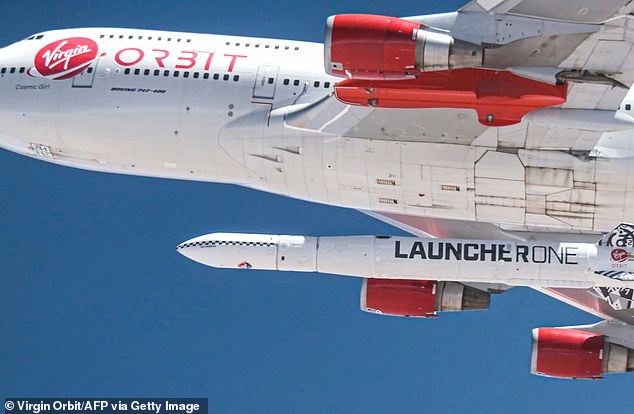 
Excitement builds in Cornwall as locals prepare for Britain’s first ever rocket launch from the airport in Newquay.

The launch, set to take place tonight at 10pm, has fuelled excitement by locals and aviation fans alike.

Local Tim Jones said on Twitter: ‘Very excited that today marks the day when my home of Cornwall and the UK becomes a launch pad for the future rocket launch industry.’

Hayley Lyon tweeted: ‘Such an exciting development for the South West… we look forward to hearing how it went!

The launch, set to take place tonight at 10pm, has fuelled excitement by locals and aviation fans alike

‘Good luck Andrew Boomer and all at Cornwall Airport Newquay.’

While some were quick to point outtheir opinion on the rocket’s effect on the environment on Facebook, Ryan Juleff said: ‘Huge event for Cornwall, BEST of luck Cosmic Girl and also to Spaceport Cornwall.

‘One small step for man, one BIG step for Cornwall Space port.’

The ‘re-purposed’ jumbo jet called Cosmic Girl will take off from the UK’s first spaceport in Cornwall carrying the 70ft rocket under its wing to a height of 35,000ft, before releasing it south of Ireland.

How will it work? History could be made as early as tonight, when Cornwall could host the first ever orbital space launch on UK soil. A former Virgin passenger plane is scheduled to take to the skies and drop a rocket that will fly off into space (shown above)

The ‘re-purposed’ jumbo jet called Cosmic Girl will take off from the UK’s first spaceport in Cornwall carrying the 70ft rocket under its wing to a height of 35,000ft, before releasing it south of Ireland

The rocket, LauncherOne, will then soar into space with a payload of nine satellites.

Their purposes range from navigation to sea surveillance to prevent illegal fishing, smuggling and piracy.

Some people appeared sceptical on social media, since the launch of LauncherOne itself might not be visible from the UK.

Kit Chapman wrote on Twitter: ‘It’s exciting… but there is little point watching.

‘The plane takes off from Newquay, the rocket launches over the Atlantic. You won’t see anything.’

Bill Hooper added: ‘Tonight, more like tomorrow morning, early, a Jumbo jet will tkae off from Newquay Airport, fly out over the Atlantic Ocean and release a rocket that will put several small satellites into Earth’s orbit.

The weather conditions could potentially pose a problem for the rocket launch.

Organisers said they are working closely with the Met Office to ensure there is no risk of triggered lightning.

Due to cloudy skies, it might be hard to see the launch.

‘Seems like a big waste of money that could have been better spent fixing the county’s road, tackling its housing problems or poor transport and infrastructure.’

Like Mr Lovatt, not everyone is happy about the pending rocket launch.

Elizabeth Wilson said: ‘Stop messing with rockets in space, (we) need to sort out (our) own planet first.’

Lisa Schoepe added: ‘ Stop sending rockets up, everytime one goes up you are breaking the ozone (layer) just a little bit more.

‘It’s no wonder we have global warming, humans killing earth more and more.’

Adrian Brittain wrote: ‘All we need to know is it’s a waste of money and resources. Adn cr** for the environment!’

However, not everyone is happy about the pending rocket launch. On Facebook, people voiced their frustration at the launch and the related costs, saying that ‘the average rocket launch emits more greenhouse gases than my car does in a thousand lifetimes’ or the rocket launch being ‘cr** for the environment’

HOW VIRGIN ORBIT GETS SATELLITES INTO SPACE

TAKE OFF Cosmic Girl, an adapted Boeing 747, takes off from an air and space port, initially in California.

ROCKET DEPLOYMENT  At cruising altitude around 35,000 feet, the chief pilot hits the Big Red Button that releases the rocket from the pylon.

FIRST STAGE BURN After a 4-second freefall, the first stage engine, NewtonThree, bursts to life, accelerating the rocket to more than 8,000 miles per hour. Once its fuel is spent, the first stage detaches.

FAIRING SEPARATION With LauncherOne now between 310 to 745 miles above the Earth’s surface, the fairing pops open, exposing the payload as it nears its destination.

RETURN TO EARTH Atmospheric drag will eventually pull the second stage back down to Earth, where it burns up in the atmosphere, minimising environmental footprint.

If you enjoyed this article…

What other space launches will take place in 2023? MailOnline looks at the exciting missions blasting off this year

Why haven’t aliens contacted Earth yet? Scientists say it’s because there’s no sign of intelligence here!