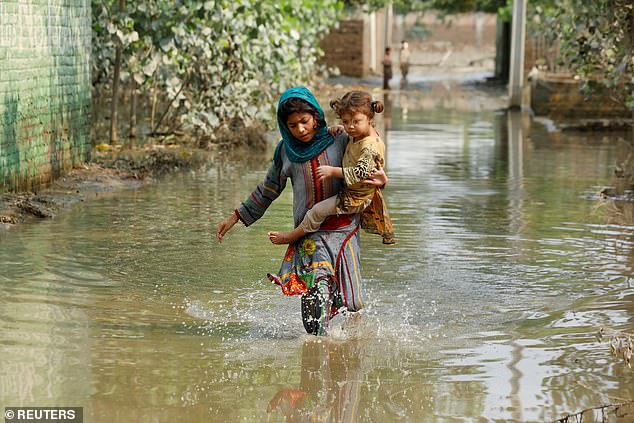 Talks to reach a new climate change deal were yesterday going to the wire at the COP27 summit in Egypt.

The conference, being held at the Sharm el-Sheikh resort, ran into an extra day as negotiators from nearly 200 countries struggled to reach a ‘loss and damage’ agreement to help poorer countries affected by the effects of global warming.

Nations from the developing world claimed they should receive compensation from Western countries for damage such as the recent floods in Pakistan.

These countries put little of the heat-trapping gases into the atmosphere, they claimed.

Nations from the developing world claimed they should receive compensation from Western countries for damage such as the recent floods in Pakistan. Pictured: A girl carries her sibling through flood water, following flooding in Nowshera, Pakistan on September 4 this year

Pakistan’s Prime Minister Shehbaz Sharif delivering a speech at the leaders summit of the COP27 climate conference in Sharm el-Sheikh, Egypt on November 8

Irish environment minister Eamon Ryan, one of the lead negotiators, said: ‘These negotiations won’t work if it’s pitching one country against another. The only way it will work is if we sit down in collaboration.’

The outcome of the 12-day event is being seen as a test of global resolve to tackle climate change and continue the work of the COP26 summit that was held in Glasgow last year.

A COP27 draft agreement that was released yesterday reaffirmed past commitments, including those made at Glasgow, to limit global warming to 1.5C.

But reports said there was little sign of the necessary ambition to make the emissions cuts required to reach that goal.

Earlier, Frans Timmermans, the European Union’s climate policy chief, had warned that the EU was prepared to ‘walk away’ from negotiations if the final accord was not ambitious enough.