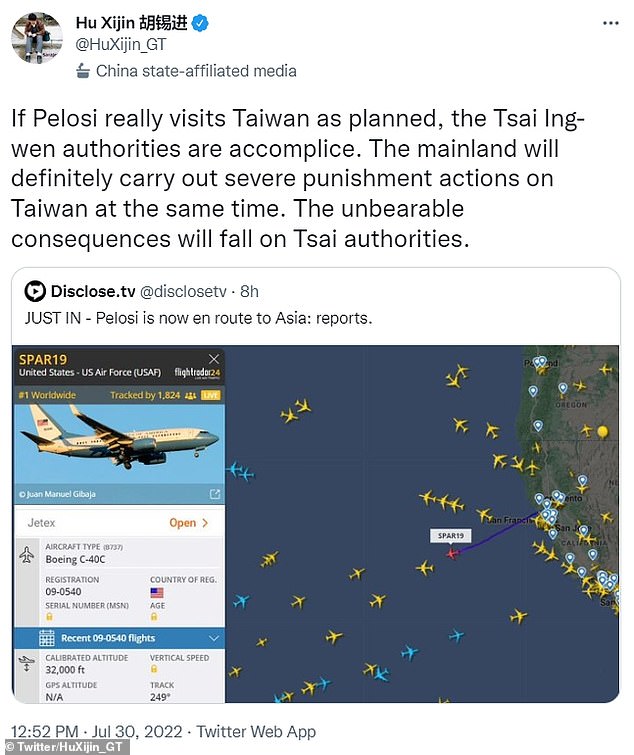 
The Chinese state media threatened ‘unbearable consequences’ on Taiwan if US House Speaker Nancy Pelosi visits the nation as her plane departed for Asia on Saturday.

‘If Pelosi really visits Taiwan as planned, the Tsai Ing-wen authorities are accomplice[s],’  Hu Xijin, a commentator with the Chinese state-affiliated Global Times, wrote on Twitter, referencing the Taiwanese government.

‘The mainland will definitely carry out severe punishment actions on Taiwan at the same time. The unbearable consequences will fall on Tsai authorities.’

Along with the warning, Xijin posted an image tracking the flight of the Boeing C-40C plane carrying the Speaker of the House as she departed San Francisco.

The latest warning comes as the Chinese military conducted live-fire exercises Saturday morning off its coast opposite Taiwan after Xijin claimed China may shoot Pelosi’s plane down.

Pelosi is reported to be in the air on her way to the Asia-Pacific region for the start of an Asian tour that includes stops in Japan, South Korea, Malaysia and Singapore in August amid threats by China to shoot her down if she visits the island of Taiwan

On Saturday morning, the Chinese military conducted live-fire exercises off its coast opposite Taiwan following warnings that Pelosi’s plane might be shot down

The People’s Liberation Army conducted the ‘live-fire exercises’ near the Pingtan islands off the Fujian province, the official Xinhua News Agency announced. The Maritime Safety Administration warned ships to avoid the area.

Such exercises usually involve artillery. The one-sentence announcement gave no indication whether Saturday’s exercise also might include missiles, fighter planes or other weapons.

Two other vessels – identified by Vietnam-based maritime observer Duan Dang as a Chinese Type 052D destroyer and a Type 054A frigate – were seen 27km and 23km away from the Taiwan Strait. Both are armed with surface-to-air missiles.

Meanwhile, the Chinese navy was conducting military exercises off its southern coast near Guangdong, following exercises in nearby Hainan province.

It is all seen as a show of force to dissuade Pelosi from visiting the island.

Beijing has reacted furiously to the prospective visit of the third-ranking official in the US government to Taiwan. Chinese leader Xi Jinping warned President Joe Biden on Thursday that ‘those who play with fire will perish by it.’

‘It is hoped that the US will be clear-eyed about this.’

Xijin’s latest warning to the US comes a day after Twitter temporarily suspended his account after suggesting China would shoot down Pelosi’s plane and its military escort.

‘If US fighter jets escort Pelosi’s plane into Taiwan, it is an invasion. The PLA has the right to forcibly dispel Pelosi’s plane and the US fighter jets, including firing warning shots and making tactical movements of obstruction. If ineffective, then shoot them down,’ Xijin, had written in a now-deleted tweet.

The speaker has not confirmed whether she will visit the island democracy during an Asian tour that includes stops in Japan, South Korea, Malaysia and Singapore.

In response to a question about the potential Taiwan trip on Friday, Pelosi only said: ‘I don’t talk about my travel because it’s a security issue.’

Two vessels identified as a Chinese Type 052D destroyer and a Type 054A frigate were seen 27km and 23km away from the Taiwan Strait. Both are armed with surface-to-air missiles (file photos)

Pictured: Taiwanese navy launches a US-made Standard missile from a frigate during the annual Han Kuang Drill, on the sea near the Suao navy harbor in Yilan county on July 2

As the leader of the co-equal legislative branch of the US government, Biden has no authority to order her to abandon the visit.

Biden said last week the Pentagon thought a Taiwan trip was ‘not a good idea.’

‘Well, I think that the military thinks it’s not a good idea right now,’ Biden said in response to a question about Pelosi’s reported trip. ‘But I don’t know what the status of it is.’

In a Thursday phone call between the leaders of the two superpowers, the Chinese premier said he firmly opposes Taiwan’s independence and the interference of external forces.

Biden expressed the US stance on the issue has not changed, according to a read out of the meeting.

‘If she goes, there will definitely be a Taiwan Strait crisis, and it will definitely exceed the last one in 1995-1996,’ Wu Xinbo, director of the Center for American Studies at Fudan University in Shanghai, told the Financial Times.

‘That is because China’s military capabilities by far exceed those of 26 years ago.’

Xi warned Biden on the call, according to Chinese state media: ‘Those who play with fire will only get burnt. Hope the US side can see this clearly’

Even so, most analysts believe China would be keen to avoid open military conflict with the US, which has military bases dotted around the region and the USS Ronald Reagan carrier group in the South China Sea.

In spite of this reticence, the PLA has flown growing numbers of fighter planes and bombers near Taiwan and has in the past fired missiles into shipping lanes to the island.

Taiwan and China split in 1949 after a civil war that ended with a communist victory on the mainland.

The two governments say they are one country but disagree over which is entitled to national leadership. They have no official relations but are linked by billions of dollars in trade and investment.

Share. Facebook Twitter Pinterest LinkedIn Tumblr Email
Previous ArticleClimate crisis: This nation is scorching in a heat wave and wildfires, yet it’s returning to planet-baking coal
Next Article Update: The young man who was killed by a Slay Queen after returning from Canada is reportedly married with kids