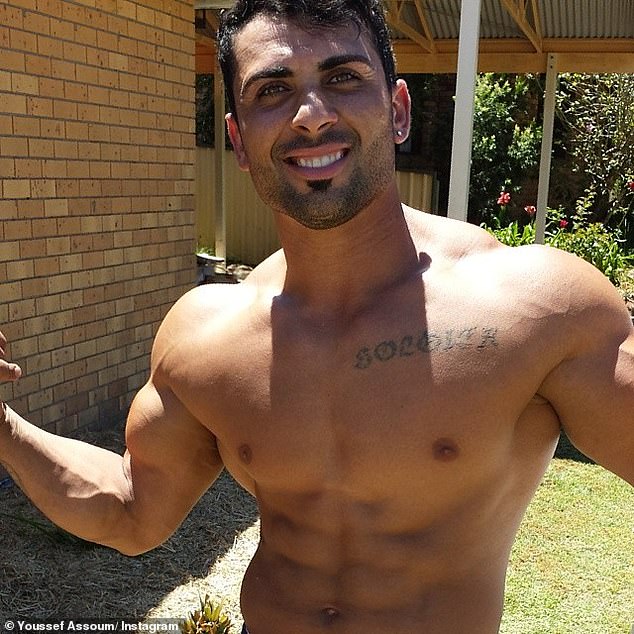 
Comanchero enforcer Tarek Zahed’s first appearance in court on Monday over the alleged murder of fitness fanatic Youssef Assoum eight years ago was a bittersweet moment for the alleged victim’s family.

In a remarkable coincidence, Monday marks what would have been Assoum’s 37th birthday.

Assoum, 29, was shot in the thigh and stabbed in the head several times in December 2014, before he was dumped less than 50m from Bankstown Hospital, in Sydney’s west.

He was found in a pool of blood on Claribel St about 12.15am by an off-duty doctor and rushed to Liverpool Hospital, where he later died from his injuries.

A years-long investigation into the alleged gangland murder culminated in the dramatic arrest of Zahed in the city’s east on Sunday, with tactical police swarming a black car, bombarding it with rubber bullets, then taking him into custody.

The bikie sergeant-at-arms, who was the victim of a botched hit in May, has since been charged with murder and kidnap in company and refused bail.

The brutal death of Assoum – a fitness fanatic tradesman and animal lover – has left his family and homicide detectives searching for answers for almost eight years.

During the early hours of December 11 in 2014, residents of Claribel Street awoke to a commotion outside and the sound of a man screaming for help.

‘They were swearing and running up and down (the street). I got up when I heard “help”,’ one woman told The Daily Telegraph at the time.

Another resident Venero said he heard arguing and what sounded like a ‘scuffle’.

‘I heard yelling yesterday afternoon and I heard it again last night. I heard like a melee going on for 30 ­seconds,’ he said yesterday.

‘I didn’t hear any pleas for help, just people scuffling or fighting.’

National sergeant-at-arms Tarek Zahed, 42, was arrested on Sunday evening, just three months after he was shot 10 times in a gangland hit

A short while later, a doctor walking to his car discovered Assoum and tried to render assistance until paramedics arrived.

At the time, police sources said it was believed Assoum may have been dumped near the hospital by friends or associates who were unwilling to identify themselves.

A 30-year-old shirtless man was arrested at the scene, who witnesses said appeared to be one of Assoum’s friends.

*Police said Yousseff Assoum he was known to the force

*At the time of his death, police said they believed he was a member of a rival gang to the Brothers4Life clan

*According to social media posts, he worked as a tradesman in construction

*He appeared to be an animal lover, sharing images of himself with monkeys, birds, snakes and other creatures

Police would not confirm the pair’s relationship to the media and it remains unclear whether or not he was later charged, what the charges may have been, or if any charges were later dropped.

The area was locked down as forensic officers and specialist ballistic dogs swiftly moved in to work on the scene, with a Toyota Yaris found nearby seized by police.

Detectives could not immediately determine where the shooting took place and spent the first days of the investigation trying to pinpoint the location.

A green fence at the intersection of Claribel and Artegall streets became a focus point for forensics and ballistics teams scouring the neighbourhood for evidence.

Initial investigations focused on links between Assoum’s attack and two other non-fatal shootings – including the mother of Brothers 4Life kingpin Bassam Hamzy – which took place just hours after his death.

In the first, two men were gunned down in Preston, in Sydney’s southwest, in a suspected drug-deal gone wrong, with one of them stumbling into the foyer of a local Catholic club to seek help.

The second saw the 57-year-old Lola Hamzy shot in the stomach after she answered the door of her Auburn home.

The timing of the shootings – which occurred within 24 hours –  led investigators to believe they were the result of warring crime syndicates, with police saying Assoum was believed to be a member of a rival gang.

While little is known about Assoum, his alleged relationship with Zahed, or which gang he was believed to belong to, police told media at the time he was known to the force.

Social media accounts paint him as a fitness enthusiast and animal lover, who worked as a tradesmen within the construction industry.

Numerous photos show him posing with birds and rabbits as well as exotic animals, including a tiger, chimpanzee, and snake.

Other posts include pictures of him standing next to luxury cars, on job sites, and images of healthy meals such as muesli bowls and salads, alongside the hashtag ‘eatclean’.

In the years since his death, friends and relatives have continued to sporadically share tributes to the young man whose life was tragically cut short.

‘Forever in our hearts rip my brother,’ his brother wrote in October last year.

‘I love u more than life it’s self it’s been to long with out I would do anything to see that smile one more time allah yerhamek soldier.’

Another friend said he wish he could have been by Assoum’s side ‘when he needed it most’.

Assoum frequently shared pictures online of himself alongside numerous animals

TIMELINE OF THE YOUSSEF ASSOUM CASE

*Youssef is found allegedly shot and stabbed near Bankstown hospital. He is rushed to Liverpool Hospital, but later dies

*Police launch an investigation into the shooting

*Police reveal Assoum was known to police. They announce the force believes he is a member of a gang and they are investigating whether his death is related to two other shootings that took place hours later.

*Police arrest Comanchero bikie Tarek Zahed in Eastern Sydney and charge him with murder and kidnapping in company.

‘Not a day goes by I don’t remember everything you’ve done for me the hardest thing ever is not being there when you needed me most,’ the friend wrote on August 28, 2015.

In a gushing post, he praised his girlfriend for making him a cake out of lollies, with sugar treats such as zappos, maltesers, and skittles stacked on top off each other into six tiers.

‘My birthday cake looks so good!’ he wrote.

‘Made by my baby cos she knows how much I love lollies.’

At the time of Assoum’s alleged murder, Zahed had been patched member of the Comancheros for two years.

On Sunday, NSW Police said the arrest of Zahed had come after dogged efforts by detectives from the State Crime Command’s Homicide Squad with the assistance of South West Metropolitan Region, under Strike Force Fairmount.

‘During the investigation, police have also received assistance from the NSW Crime Commission (NSWCC) and Victoria Police’s Echo Taskforce,’ they said in a statement.

The allegedly slain young man was a tradesman, who shared photos of himself on job sites

Dramatic photos can be revealed of bloodied Comanchero powerbroker Tarek Zahed’s arrest at 4:50pm on Sunday after cops shot up his BMW by blasting ‘bean bag rounds’ through the windows

‘We will be alleging this person is responsible for the killing of Mr Assoum in 2014 and that his senior position in the Comanchero OMCG links him to a number of other matters relevant to police,’ Det Supt Doherty said.

‘As part of Taskforce Erebus’ terms of reference, a significant number of investigators and analysts are examining an array of persons and crimes and any connections they may have to current criminal conflicts.

‘This man’s arrest should serve as a blunt warning to those involved; police are watching you closely and will abruptly end your lavish lifestyle when you least expect it,’ Det Supt Doherty said.

Comanchero bikie Tarek Zahed was dramatically arrested in Sydney on Sunday as heavily armed police fired rubber bullets into his car before dragging him out.

Zahed, 42, was detained for his alleged involvement in a 2014 underworld murder, with his arrest coming just three months after he was shot 10 times in a gangland hit that claimed the life of his brother.

A number of rubber bullets were fired into his black BMW with several large holes seen in the partially shattered back windows.

A NSW Police spokesman said Zahed was taken to Surry Hills police station after being detained.

A NSW Police spokesman confirmed a 42-year-old man was arrested by officers at Edgecliff just before 5pm on Sunday.

Takek Zahed (seated) and his brother Omar (standing) were gunned down outside a gym in Sydney’s west in May. Omar died as a result of the shooting

‘As part of an ongoing investigation, a 42-year-old man was arrested by Tactical Operations Unit officers during a vehicle stop on New South Head Road at Edgecliff about 4.50pm today (on Sunday),’ the spokesman said.

Zahed was shot alongside his brother Omar at a gym in western Sydney in May and miraculously survived.

Comanchero national president Allan Meehan last Sunday posted a photo alongside the underworld figure and two other associates, all decked out in designer clothes and jewellery at a Melbourne restaurant.

Masked gunman in May stormed the Bodyfit Gym in Sydney’s Auburn firing more than 20 bullets inside the health club.

Zahed, also known as the ‘Balenciaga Bikie’, was rushed to hospital in critical condition and was taken into surgery with bullet wounds to his head and body, including one that pierced straight through his eyeball. Omar, 39, died at the scene.

Doctors were astonished by his rapid recovery that saw him released from hospital less than two months later following lengthy discussion about whether he would need limbs amputated.

Despite being being shot ten times, there were no visible scars on the face of the bikie hard man in the photo.

A source said he has completely lost sight in his right eye, rendering him virtually blind as he already had reduced vision in his left eye.

‘He had an incident years ago that means vision in his left eye is only 20 to 30 per cent,’ the source said.

‘So with him likely being blind in his right eye now, he will be almost completely unable to see.’

Since leaving hospital in July, it’s believed Zahed had been laying low in Melbourne.

Homicide Squad Commander Detective Superintendent Danny Doherty said at the time police were investigating possible motives for the assassination attempt, refusing to rule out an inside job.

‘We can’t discount an internal conflict,’ he told reporters.

‘There is opportunities for people to take their place and there’s a real power struggle within organised crime organisations.’