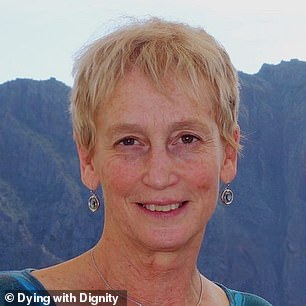 
A Canadian doctor who’s personally euthanized more than 400 people said she helped kill a man who was previously deemed unsuitable for assisted suicide.

Ellen Wiebe, a doctor who works with Dying With Dignity Canada, boasted in a seminar for physicians working in assisted suicide about the time she treated a patient who did not qualify for the end of life service.

A Medical Assistance In Dying (MAID) assessor had rejected the unnamed man because he did not have a serious illness or ‘the capacity to make informed decisions about his own personal health.’

But the man eventually made his way to Wiebe, who cleared him, flew him out to Vancouver, and euthanized him, The New Atlantic reports.

‘It’s the most rewarding work we’ve ever done,’ Wiebe said of MAID during a 2020 event in a video that’s since been shared online.

Obstetrician Stefanie Green, a colleague of Wiebe, also revealed that she’s helped 300 people die in Canada’s controversial MAID program, which eclipses similar programs in the US.

She uses the term ‘deliveries’ to describe both her work helping women give birth – and people end their lives.

In 2021, only 486 people died using California’s assisted suicide program, but that same year in Canada, 10,064 died used MAID to die that year.  MAID has now grown so popular that Canada has both anti-suicide hotlines to try and stop people killing themselves, as well as pro-suicide hotlines for people wanting to end their lives.

MAID has fallen into further scrutiny over claims that people are now seeking assisted suicide due to poverty and homelessness or mental anguish, as opposed to the traditional method of the terminally-ill seeking a painless death.

Among the new type of patients was Rosina Kamis, 41, who said she needed to be ‘euthanized ASAP.’

According to an analysis of Kamis’ medical history and messages sent to doctors and family reviewed by The New Atlantic, the 41-year-old was facing eviction, needed to crowdfund to pay for food, and was afraid that she would ‘suffer alone.’

She also feared being institutionalized, and saw MAID as ‘the best solution for all.’

Although Kamis suffered from chronic leukemia and other health problems, her condition was not terminal, The New Atlantic reported, and a letter seemingly made for her attorney painted a different picture as to why she sought euthanasia.

‘Please keep all this secret while I am still alive because… the suffering I experience is mental suffering, not physical,’ she wrote.

Kamis was approved for MAID and chose to die on September 26, 2021, the date of her ex-husband’s birthday. She passed away in her basement apartment after a doctor gave her a lethal injection.

Rosina Kamis, 41, suffered from chronic leukemia, but a letter in her will read that the mental anguish she was suffering was the reason she chose to end her life

A review of Kamis’ final days revealed that she was afraid of dying alone, was struggling to pay for food, was facing eviction and feared she would be institutionalized. She chose to die in her basement apartment on her ex-husband’s birthday

Some of these new cases were highlighted in a 2021 MAID presentation by Althea Gibb-Carsley, a recently retired care coordinator and social worker for the Vancouver Coastal Health’s assisted dying program.

In the presentation, Gibb-Carsley describes a 55-year-old patient by the name of Mary, who suffers chronic pains and cannot tackle the issue due to her low income.

‘She does not want to die, but she’s suffering terribly and she’s been maxing out her credit cards. She has no other options,’ the presentation reads.

Gibb-Carsley goes on to describe similar situations with a patient named Nancy, 68, a former doctor who ran out of savings, and another named Greg, 57, a writer suffering from a history of trauma who lacks housing.

Gibb-Carsley also highlighted a case of a 38-year-old trans woman named Lucy, an immigrant who suffers from chronic pains and felt trapped in her one-room studio apartment with ‘no air or light and creepy men all around.’

It is unclear if any of these people were ever approved for assisted suicide.

Gibb-Carsley’s presentation concluded with a note that the problem points out the inadequacies of the welfare state that is incapable of helping those who are struggling to make ends meet.

The report appears to suggest that Canada should bolster its social welfare programs based on the rising number of people seeking to end their lives due to poverty.

In regards to these types of patients, Wiebe told The New Atlantic: ‘It is rare for assessors to have patients who have unmet needs, but it does happen. Usually these unmet needs are around loneliness and poverty.

‘As all Canadians have rights to an assisted death, people who are lonely or poor also have those rights.’

Green, who describes her work as an obstetrician and euthanasia assistant as helping with ‘deliveries,’ told the publication that stories about the poor seeking MAID are just ‘clickbait.’

‘You cannot access MAID in this country because you can’t get housing,’ she said. ‘That is clickbait. These stories have not been reported fully.’

However, that is one person who is one step closer to MAID services despite listing poverty as his primary reason for seeking assisted suicide.

Lee Landry, 65, is one doctor’s signature away from being approved for MAID despite listing poverty and homelessness as his primary reason for wanting to die

Lee Landry, 65, told assessors for the procedure he ‘doesn’t want to die’ but has applied for MAID because he can’t afford to live comfortably.

Astonishingly, a doctor has given one of the two signatures required for Landry to end his own life.

Landry is awaiting the decision of a second doctor who has assessed his eligibility. If that doctor rejects the application, Landry says he will simply ‘shop’ around for another who’s prepared to sign off on his death – something that’s allowed under Canada‘s assisted dying laws.

The shocking case lays bare the increasingly relaxed approach to euthanasia in Canada, where experts say ‘choosing to die is more accessible than support for people with disabilities’.

Landry uses a wheelchair and has several other disabilities that mean he is eligible for MAID, including epilepsy and diabetes. But until recently, he was able to live comfortably, sharing his modest home in Medicine Hat, Alberta, with his service dog.

Changes to his state benefits when he turned 65 in May meant his income was cut and he’s now left with around $120 per month after paying for medical bills and essentials.

Landry is also braced for a rent hike in January that could mean his benefits no longer cover the cost of essentials, placing him on the brink of homelessness.

Many of gone on to blast Canada’s euthanasia program, including former Paralympian Christine Gauthier, who slammed her government for offering to euthanize her when she grew frustrated at delays in having a wheelchair lift installed in her home.

Army Veteran Christine Gauthier, a former Paralympian, testified in Canadian Parliament on Thursday that a Veterans Affairs Canada (VAC) caseworker offered her euthanasia after she expressed frustration about delays in installing a wheelchair lift at her home

After years of delays in getting the home lift, Gauthier says the caseworker told her: ‘Madam, if you are really so desperate, we can give you medical assistance in dying now.’

The worker who made the offer hasn’t been named, but they are feared to have offered three other veterans who contacted VAC with problems the same ‘solution’, Global News reported.

The scandal emerged a week after Canada’s veterans affairs minister confirmed that at least four other veterans were similarly offered access to Canada’ MAID law in response to their troubles, a situation Prime Minister Justin Trudeau called ‘absolutely unacceptable’.

Gauthier said that she has been seeking VAC assistance in getting a chairlift for her home since 2017.

‘It has isolated me greatly, because I have to crawl down my butt with the wheelchair in front of me to be able to access my house,’ she told Global News.

She said she was shocked by the offer of suicide from the caseworker, which came in a conversation in 2019.

‘I was like, ‘I can’t believe that you will … give me an injection to help me die, but you will not give me the tools I need to help me live,” she said. ‘It was really shocking to hear that kind of comment.’

Gauthier was injured in an Army training accident in 1989, suffering permanent damage to her knees and her spine.

She competed in the 2016 Paralympic Games and Prince Harry’s 2016 Invictus Games as a canoeist, power-lifter, and indoor rower.

Use of medically assisted suicide in Canada has surged in recent years. More than 10,000 people used in in 2021, an increase of 31 per cent

Starting March 2023, Canada’s medically assisted suicide eligibility will expand even further, allowing people who do not have a physical ailment to receive one. They mush receive approval from two doctors and wait 90 days between application and time of death

Gauthier’s testimony, and reports of other similar cases, have drawn public outcry, and Trudeau vowed to make changes.

Medically assisted suicide was first legalized in Canada for terminally ill patients in 2016, but last year, the law expanded to offer euthanasia to patients whose natural death is not believed to be imminent.

Starting next year, a new law will allow people suffering from mental illness, which had not previously be a qualifying condition, to receive medically assisted suicide.

The expansion of Canada’s euthanasia laws, already among the most permissive on the planet, has raised concerns from some quarters.

Amid the latest expansion, Canada has two hotline systems for people looking for help in for assisted suicide, as well as those who want to be talked out of killing themselves.