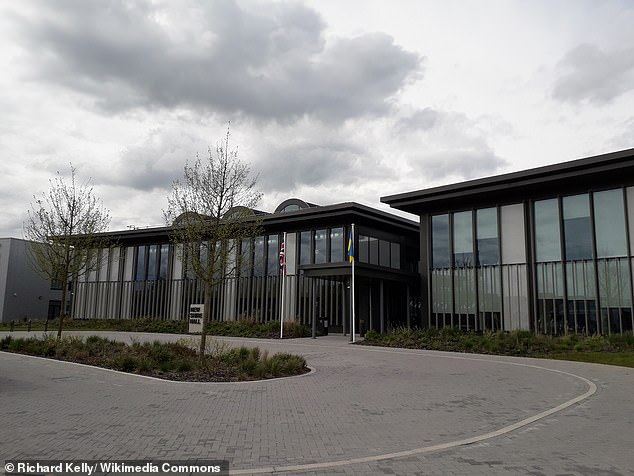 
A new multi-million pound council headquarters has been left virtually empty while staff continue to work from home, it has been claimed.

New Shire Hall, the newly built headquarters of Cambridgeshire County Council, was opened last summer in Alconbury at a cost of £18million to the taxpayer.

Critics said the decision to keep limited use of the building ‘beggars belief’ and said it was ‘costing residents money’.

Reports suggest the building remains largely unoccupied due to lingering Covid social distancing measures which mean many staff members are still working from home – despite the Government scrapping WFH advice earlier this year.

Cambridgeshire County Council reportedly still has the majority of staff members working from home or at alternative venues meaning the brand new building has yet to reach full occupancy.

According to the Telegraph, the building is operating with a skeleton staff as a result of ‘Covid guidelines’.

The Government’s work from home advice was scrapped in England back in January as the nation’s focus moved to Living with Covid and returning to pre-pandemic lifestyles.

Even patients in hospitals and GP surgeries are no longer advised to socially distance, although masks are still a requirement in NHS healthcare settings.

The new multi-million pound Cambridgeshire County Council headquarters (pictured) has been left virtually empty while staff continue to work from home, it has been claimed

Despite this, members of the public in Cambridgeshire have reported being told that there are no staff working at the county council’s new headquarters due to Covid guidelines.

The Telegraph reported that there were as few as three cars in the car park of the £18million building.

The council, run by a Liberal Democrat-Labour coalition, has yet to disclose how many staff members are currently working from home or exactly what Covid guidelines the council was still enforcing.

Council documents published last month show that even full council meetings are still being held at external venues due to ‘the requirement for social distancing’.

The document, presented to the Strategy and Resources Committee, reads: ‘While the severity of the pandemic has reduced over recent months, COVID-19 remains a threat.

‘A local authority meeting that was held recently has reportedly resulted in a significant number of participants contracting COVID-19.

‘As a result of this, the MFR (multi-function room) will not be suitable for use for Full Council until the requirement for social distancing is removed under Public Health guidance and safety risk assessments.

Despite acknowledging that the MFR ‘formed part of the core design requirements’ for the building, the document also outlines concerns over its suitability as a venue for full council meetings.

It states that members have raised concerns over the safety and security of councillors due to the proximity of the public gallery to the councillors’ seating area.

The report highlighted that the council chamber previously used in the old Shire Hall headquarters had a first floor balcony that physically separated councillors and the public, for ‘all but the most determined persons, [for example] those attempting to bring abseiling equipment into the building’.

The council has refuted claims that the building is unused but has not disclosed exactly how many members of staff are working there.

It has been suggested that the numbers will increase as ‘virus levels continue to decline’ but has not shared a timeline on how or when this would happen.

Jake Berry, the Conservative MP and former minister told the Telegraph: ‘There is little or no reason whatsoever that people working for Cambridgeshire County Council should not go back to work.

‘We have seen Covid restrictions rolled back across the country and it beggars belief that the only place they haven’t heard about this is in Cambridgeshire.’

Steve Count, Cambridgeshire county councillor and leader of the conservatives, said the move was a ‘politically motivated attack’ on the building which was commissioned by the Tories under a former administration.

He said: ‘The purpose built New Shire Hall is a fantastic new asset, commissioned by the Conservative administration when they were in charge, which should be delivering over £40m of savings for the Taxpayers of Cambridgeshire.

‘It’s a shame that the new Liberal Democrat and Labour alliance are continuing to not occupy this excellent building and adding further unnecessary expense on to our hard pressed residents.

‘Covid excuses are their thin disguise to what is essentially a politically motivated attack, that is costing our residents money.’

However, council leader Lucy Nethsingha hit back at the claim which she branded ‘disgraceful’, insisting that council staff continued to work ‘incredibly hard’ despite working from home.

She said: ‘Not only has New Shire Hall been open for public meetings since May last year, but the comment from Conservative MP Jake Berry that “people working for Cambridgeshire County Council should go back to work” is deeply offensive.

‘Staff at Cambridgeshire County Council have worked incredibly hard over the past 3 years to support thousands of vulnerable people under extremely difficult circumstances.

‘To have this comment from a Conservative MP shows just how out of touch they are with the phenomenal efforts that all those working in public services have put in during the pandemic.

‘Our staff have worked above and beyond the call of duty during the pandemic to keep people safe in their homes, they have struggled with home schooling while coping with ever changing government advice and guidance.’

Ms Nethsingha also said it was ‘inaccurate’ to suggest the building was largely unused but did not comment on the impact of the council’s use of social distancing and Covid guidelines on the building’s occupancy.

Labour leader Elisa Meschini said ‘plenty of staff’ work in the building including the council’s chief executive who is in every day.

She added: ‘I firmly believe that work is something you do – not a place you go.

‘Like the leader of the council I find it totally offensive for anyone to suggest that our staff who include social workers, reablement staff, school welfare teams, highways maintenance crews, librarians, registrars have not been working flat out over the course of the pandemic.

‘I couldn’t be prouder of them or our record during the pandemic and beyond and anyone who suggests this is not the case has no clue whatsoever about how local authorities serve local people day in and day out.

‘Where people need to be in our buildings they are, and we will continue to support them working from where ever they can do this the most effectively.’

A spokesman for Cambridgeshire County Council said essential public services have been running throughout the pandemic from a ‘range of workplaces and settings’.

It said New Shire Hall was just one of multiple buildings that the council operates from and that many public facing services are operated from other sites.

The spokesman added: ‘The Government’s Living with Covid plan does remove the restrictions at a national level.

‘However Cambridgeshire has remained stubbornly high in respect of both positive case numbers and hospitalisation rates so our local Public Health professional advice has been, until late last week, to continue to apply social distancing and the use of face coverings in our Council owned premises.

‘These measures do not and have not prevented reoccupation of our buildings, and as virus levels and hospitalisation rates have started to fall, we are planning for changes to this advice, but fully expect hybrid work to continue where this supports staff well-being, recruitment and retention and good outcomes for the people of Cambridgeshire.’