California: The fight against drought has a new tool: The restrictor 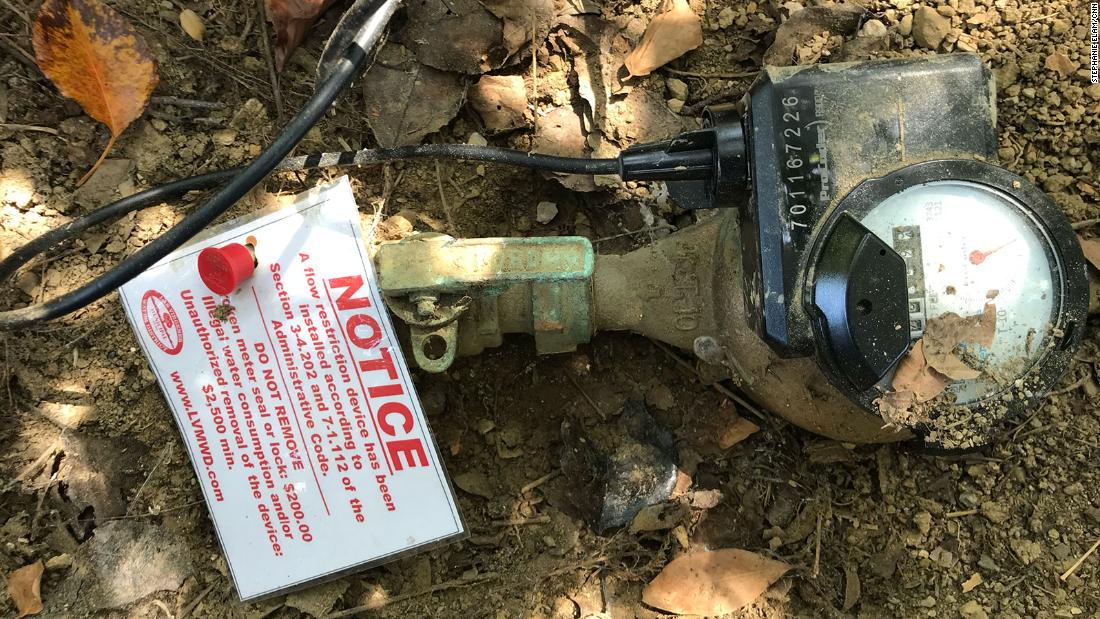 Despite a lack of any measurable rain in months, the carpet of lush, green grass likely means homeowners are either not getting the message about the dire need for water conservation, or they are ignoring the warnings.

But now, the water district has found a way to get customers’ attention. When customer service representatives are working in the different neighborhoods, they keep an eye out for any water restriction violations. And for repeat offenders, officials are trying something new: adding water restrictors to the pipes, which sharply reduce the home’s water supply.

The District covers some of the most sought-after real estate in Southern California, northwest of Hollywood and Beverly Hills, including areas along the Ventura Freeway.

Las Virgenes imports all of its water from the State Water Project, which pipes runoff from the northern Sierra Nevada mountains to Southern California. However, at the end of winter, the snowpack was just 4% of normal, forcing unprecedented restrictions. Las Virgenes is only getting 5% of its requested water supplies this year.

“We’re having to supplement the water that we have been getting from the State Water Project,” said Mike McNutt, public affairs and communications manager for Las Virgenes, who added the district is pulling water from its Las Virgenes Reservoir, its stash for emergency needs, just south of Thousand Oaks.

Right now, McNutt confirmed it is 72% full; at full capacity, it is a six-month supply. “We’ve had to take significant measures to curb water usage in order for us to ensure that there’s long-term water reliability meaning moving into the fall and winter,” McNutt noted.

Nearly all of California is in severe or worse drought (the highest three designations), per the latest US Drought monitor. Several severely deficient years of rain and snow have punctuated a 20-year long megadrought scientists say is being fueled by warmer and drier conditions brought on by climate change.

When the grass being greener isn’t a good thing

In light of the shortage and the prolonged drought, Las Virgenes has mandated residents cut their outdoor watering by half as required by the unprecedented order from its distributor, the Metropolitan Water District of Southern California.

Outdoor watering makes up 70% of most customer’s water usage, the water district says, so cutting down on irrigation can have a huge impact on conservation.

“They are only allowed to water one day a week outside, Tuesdays and Thursdays, depending on whether your address ends with an odd number or even number,” McNutt explained. On top of that, each set of sprinklers can only be on for eight minutes. “It helps maybe keep some of the grass alive if people want to still continue to have lawns, but they are brown.”

CNN rode along with Las Virgenes senior field customer service representative Cason Gilmer as he looked for wasted water. When he and his team drive around the coverage area, they keep an eye out for water where it shouldn’t be — on sidewalks and running down streets into gutters — or outdoor irrigation on when it should be off.

“When it’s in our face and the sprinklers are going off at noon on Wednesday, it’s an easy target for us,” Gilmer, who noted most customers seem to be doing their part now. “This street in particular was very, very green two months ago.”

Along the ride, the number of homes with vibrant green grass were outnumbered by brown lawns. Some lawns have been replaced with turf and others have been painted green.

Neighbors can rat on each other, celebrities included

If anyone from the water district spots water waste, they can leave a door tag to let the homeowner know they are not in compliance and what they need to do. They also send mailers. The water district also fines abusers, resulting in charges which can reach thousands of dollars depending on the size of the infraction.

But the affluent haven of Calabasas, inside the water district’s territory, is home to many A-listers with deep pockets. Some of those household names — celebrities, musicians and athletes — have used far more water than they should have, according to recent data.

People like Kevin Hart, Dwyane Wade, and according to the Los Angeles Times, Kourtney Kardashian, as well as sister Kim.

None replied to CNN’s request for comment. However, in a statement to the Times, Wade and his wife, actress Gabrielle Union, said they have “taken drastic steps to reduce water usage in accordance with the new city guidelines and have since we moved into our home.”

Las Virgenes said all of those celebrities are in good standing now.

“Those specific celebrities have been working very closely with the district. They do want to do the right thing … in order to achieve a much more efficient water usage tier,” McNutt said.

A disastrous megaflood is coming to California, experts say, and it could be the most expensive natural disaster in history

And when fines are not enough, it’s time to bring in the restrictor

With so many wealthy residents, Las Virgenes has learned some customers respond more to losing water than they do losing money.

“We try to get public education and notification and stuff about drought out there, but a lot of people throw the mailers away. They ignore it,” said Gilmer, who created a simple, yet effective way to get users’ attention one gallon at a time. “I call it a bit of a last resort.”

The water restrictor is a slim circle of food grade stainless steel with a small hole in the middle, which fits right into the offending customer’s water meter, which technicians can usually access right on the street since the meters are district property.

“This particular restrictor will give you around one gallon a minute. Normally, a three-quarter-inch meter is 25 to 30 gallons a minute. So at 25 to 30 gallons a minute, you can run your dishwasher and run your sink and have somebody in the shower and maybe even have your irrigation on and nobody knows the difference,” Gilmer explained. “With the restrictor in … your sink works fine. Your shower works OK. Your irrigation will not work. It just won’t supply the amount of water that’s demanded.”

Gilmer even tried it at his own house to see what it was like having his water restricted.

“The big part was that you can’t do two things at once. So if I was in the shower and my wife tried to do dishes, my shower was done. I just got out,” Gilmer said with a slight smile. “My wife demanded I take it off after a day and a half.”

California drought could cut state’s hydropower in half this summer

After a customer uses more than 150% of their water allocation four times, they will be in line to get the flow restrictor installed. Las Virgenes says about 1,600 connections, or just more than 7% of its customer base falls into this category.

“It’s not meant to be punitive,” McNutt said. “It’s meant to tell people … this drought is incredibly serious and what we need you to do is do your part.”

McNutt added Las Virgenes is leading by example in California as it is “using these flow restriction devices for conservation purposes.”

“We’re kind of leading this charge moving forward of how do we get people to stop using so much water with the advancement of climate change.”