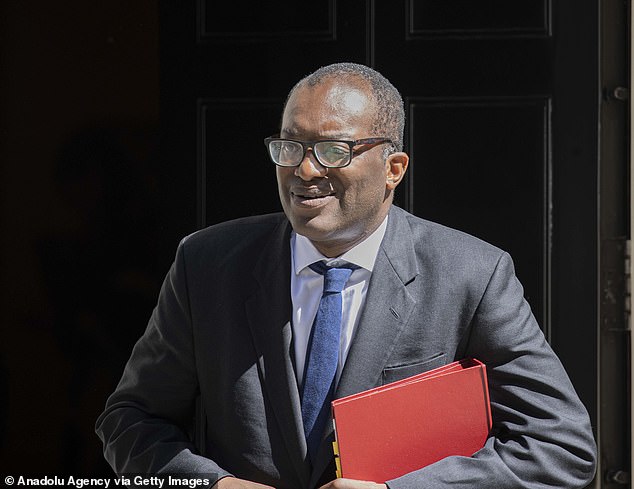 Britons could be handed relief on rocketing household bills under Government plans to sever the link between the prices of gas and electricity, it has emerged.

Ministers are set to bring forward new laws under the Energy Security Bill to overhaul the UK’s energy market in the face of the current crisis.

They have promised to provide greater protection for Britons against global fluctuations in energy prices.

The current worldwide crisis has been exacerbated by the Ukraine war, which has sent gas prices spiralling higher.

Under the current make-up of Britain’s energy market, soaring gas prices have had a knock-on effect on electricity costs.

But it has now been reported the new legislation will seek to prevent future shocks in the global gas market having a similar impact on electricity prices.

Yet the overhaul might not come in time to ease rocketing energy bills ahead of this winter.

According to The Times, Business Secretary Kwasi Kwarteng will outline proposals for reforms in the coming weeks.

These will then form part of the Energy Security Bill to be introduced in the autumn.

The newspaper said the plans will end the current system under which the wholesale cost of gas effectively determines the price of electricity for households.

Under the current make-up of Britain’s energy market, soaring gas prices have had a knock-on effect on electricity costs

More than a quarter of Britain’s electricity comes from renewable sources, such as wind farms – but it is the most expensive generator that determines the price

Although more than a quarter of Britain’s electricity comes from renewable sources, under current market rules it is the most expensive megawatt needed to meet demand that determines the price for all electricity generation.

This means that soaring gas prices have driven up all electricity costs in recent months, even though only around 40% of UK electricity comes from gas power stations.

Energy experts have compared the current market to train passengers having to pay the peak-period price for every journey they make.

One Government source told The Times: ‘In the past it didn’t really matter because the price of gas was reasonably stable.

‘Now it seems completely crazy that the price of electricity is based on the price of gas when a large amount of our generation is from renewables.’

It was also claimed ministers hope the reforms will make the market more transparent and emphasise to consumers the benefits of decarbonisation.

Michael Grubb, professor of energy and climate change at University College London, wrote in an article earlier this year that the gap between the cheaper cost of renewable energy and the final electricity price was ‘becoming unconscionable’.

He said: ‘Since renewables and nuclear will always run when they can, it is fossil fuels – and at present, unequivocally gas, plus the cost of taxes on CO₂ pollution – which set the price almost all the time, because some gas plants are needed most of the time, and they won’t operate unless the electricity price is high enough to cover their operating cost.

‘It’s a bit like having to pay the peak-period price for every train journey you take.

‘If renewables are now so much cheaper, why can’t consumers buy electricity directly from them and avoid paying the gas and carbon costs?’

It has been suggested the planned reforms will bring an end to windfall profits made by some electricity generators who are not paid under the Contracts for Difference (CfD) system.

This offers low-carbon generators a fixed price for their electricity.

The Energy and Climate Intelligence Unit has already forecast that increasing use of wind power – provided under a fixed price – could save consumers further in the event of future gas crises.

Their analysis suggested, if another gas crisis was to occur five years in the future with wholesale prices of £200 per megawatt-hour for a year, wind farms with CfDs could provide a cost saving of £5.7billion to 6.7billion in a year, equivalent to £70 to £85 a year for each household.

They added that, if that crisis was repeated in ten years’ time – by which point the Government aims to have 40GW of offshore wind as part of the move to net zero –  CfDs for wind power could save £23billion to 26billion in a year, equivalent to £290 to £330 per home.