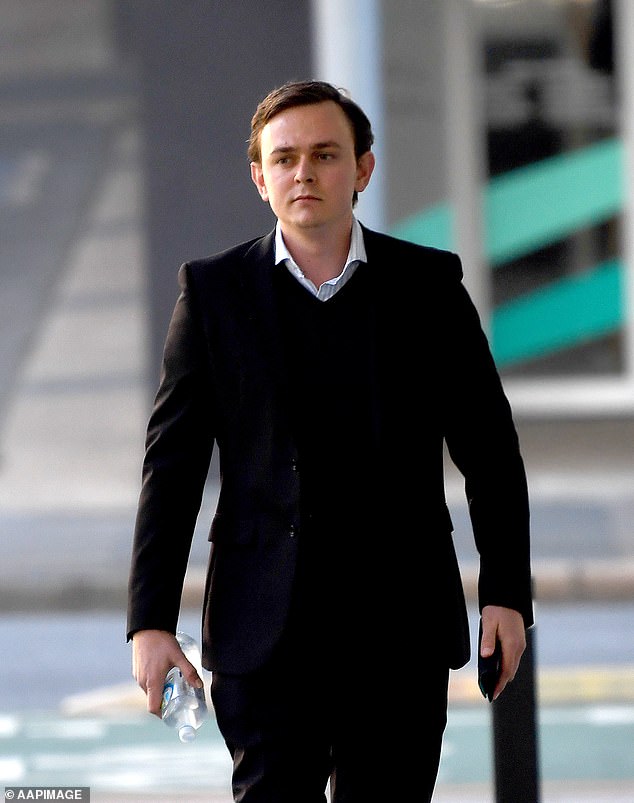 
The jury has been discharged in the trial of an openly gay man accused of raping his female friend after they were unable to reach a unanimous verdict.

The group of seven men and five women deliberated for more than 12 hours in the Brisbane District Court on whether Dominic Edmund Hansson, 28, is guilty of one count of rape on December 7, 2019.

Police allege Hansson – who has been labelled a ‘narcissist’ – arrived at the woman’s inner city apartment without invitation about 1.30am on the morning in question, drunk and determined to spend the night.

The complainant was asleep but allowed Hansson to sleep on the couch, before he convinced her to let him in bed by reminding her he was gay and in a committed, four-year relationship.

It’s alleged Hansson began ‘spooning’ the woman about 2.30am before ‘flipping her onto her stomach’ and raping her.

The prosecution argues Hansson ‘took what he already knew about her sex life as an entitlement to treat her like an object’, holding her face down on her bed and telling her he knew ‘she liked it rough’ when she pleaded with him to stop.

He sat stony-faced, supported by his father and now-ex, as his legal team argued the sex was consensual and his alleged victim had a ‘vendetta’ that prompted her to press charges.

The jury indicated on Thursday they would not be able to reach a verdict but were instructed to try to come to a decision. About 11.45am on Friday, it was clear that would be impossible.

Dominic Edmund Hansson, 28, is standing trial in Brisbane District Court this week over the alleged December 7, 2019 assault. He denies one count of rape

The jury heard on Wednesday Hansson ‘manipulated’ the victim in a ‘toxic’ attempt to erode confidence in herself and her recollection of the events.

Hansson told her he would take his own life if his long term, live-in partner at the time, Tony Rickards, were to ever learn of the indiscretion and allegedly demanded she send messages stating nothing untoward had happened between the pair.

In his closing argument, Crown prosecutor Chris Cook asked the jury to consider whether Hansson is a narcissist.

‘You might conclude he’s a narcissist who can talk his way out of anything. Only interested in himself. He lies to his partner, lied to the victim. He engaged in secret messages to the victim. He lied to police… He’s a secretive man.’

Hansson’s legal team argued narcissism is a psychiatric disorder and that their client was not diagnosed with such a condition.

They said the phrase was used simply because it elicits emotion and in an attempt to sway the jury.

Hansson told her he would take his own life if his long term, live-in partner at the time, Tony Rickards (pictured together), were to ever learn of the indiscretion.  The pair have since split

The woman – who cannot be named – went to police and filed a report on April 21, more than four months after the alleged assault.

Hansson’s defence argues she made a false report because she was insulted that the 28-year-old described her as an escort. They also cited a separate altercation between the pair over marijuana.

The incident in question occurred hours before the complainant went to police.

In Facebook messages tendered to court, Hansson told the alleged victim: ‘You need to be careful with the aromas that come out of your apartment. From what I can tell it is marijuana; constantly. Please stop.’

The woman took issue with the message because she claimed he often came to her apartment to ask for marijuana.

A heated Facebook exchange between the woman and Hansson (digital mock up above based on court hearing) is part of the reason she reported the alleged assault to police, the defence argues

She responded: ‘Don’t you dare come into my apartment asking for the same thing you’re complaining about. I tell you I don’t have any and then you b**ch about the smell of weed in the building?’

Hansson denied he ‘did either of those things’.

The complainant told police Hansson was at her apartment hours before sending those messages but she felt uncomfortable and did not give him what he was asking for.

He sat stony-faced, supported by his father and now-ex, as his legal team argued the sex was consensual and his alleged victim had a ‘vendetta’ that prompted her to press charges

The complainant who ‘enjoyed manipulating men’

Meanwhile the defence has encouraged the jury to consider several key factors in the testimony of the woman and her reliability as a witness.

Psychologist notes dredged up from mid 2018 – 18 months before the alleged offence took place – reveal the victim considers herself ‘manipulative’.

In the session, the woman admitted she could ‘lie to others to get what she wants’.

But Hansson’s legal team drew attention to a counselling session just five days after the alleged assault in which she reportedly opened up about the morning of December 7, 2019.

In it, the complainant told her counsellor she was ‘ashamed’ that she’d ‘had sex with her gay friend’ but ‘enjoyed manipulating men,’ the court heard.

When the concept of manipulating men was put to her, the woman said she was referring to her work as a sugar baby.

The defence also argues she maintained a friendship with Hansson for four months after the alleged rape before contacting police or confiding in her counsellor.

Her legal team claims this is because he manipulated her into doing so, and that she was scared to come forward.

Hansson (pictured with his parents) told police in his initial interview ‘there was no point while we were having sex where she told me to stop, or indicated that she didn’t want sex any more’

The night in question

Hansson told police in his initial interview ‘there was no point while we were having sex where she told me to stop, or indicated that she didn’t want sex any more’.

The complainant argued this is not how a young woman would broach the topic of engaging in sex.

Hansson alleged the woman initiated flirting on the evening in question and became progressively more ‘touchy feely’ as the night went on.

The 28-year-old arrived at her inner city apartment about 1.30am after a night out.

When he arrived, the pair allegedly ate pizza on the couch. Six-and-a-half hours before he arrived, the complainant ate half of a weed brownie which she said did not make her high, but was effective enough to help her sleep.

Hansson claims the complainant was drinking a cider and that he’d only consumed two glasses of champagne earlier in the evening.

Bank statements show he spent $143 in total at the Waterloo Hotel in Fortitude Valley between the night of December 6 and early December 7.

While Hansson now admits to sexual intercourse, he initially told the complainant to send him a message denying they’d even touched so that he could ‘show his boyfriend’ nothing had happened

While Hansson now admits to sexual intercourse, he allegedly initially told the complainant to send him a message denying they’d even touched so that he could ‘show his boyfriend’ nothing had happened.

When Mr Rickard, Hansson’s ex, took the stand, he could not recall ever asking for proof or seeing those messages.

When prompted as to why he engaged in sex with a woman if he was gay, Hansson said: ‘Curiosity. I was just curious and having the sort of emotional bond we had at the time, it made me much more curious, you know, I was wondering whether I was in fact actually gay.’

The complainant considered Hansson a good friend up until December 7 and had confided in him about her depression, mental health issues and interests as a ‘sugar baby’.

Hansson maintained his composure as the entirety of the submissions were recounted to the jury. He had several supporters in court who listened intently and delivered him lunch during the break.

The jury, consisting of seven men and five women, will deliberate overnight.

The complainant considered Hansson a good friend up until December 7 and had confided in him about her depression, mental health issues and interests as a ‘sugar baby’