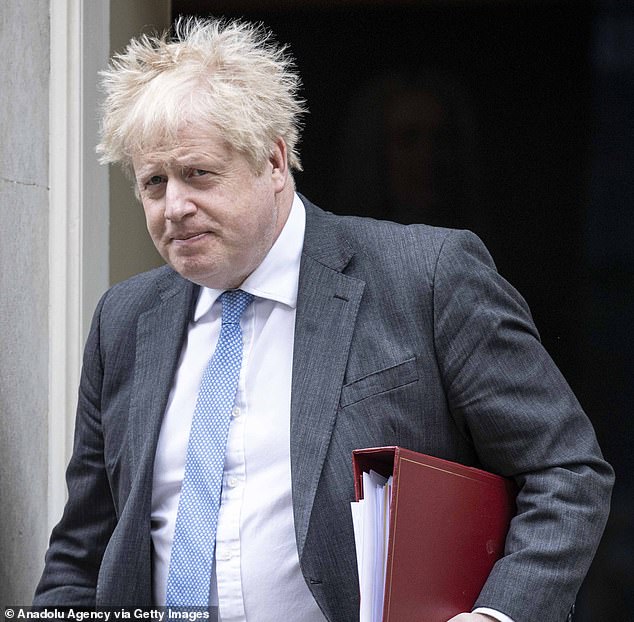 By Harriet Line For The Daily Mail

As Brussels and Washington urged London not to scrap parts of the post-Brexit deal, the Prime Minister said there was no need for ‘drama’.

But he could rip up parts of the agreement as early as next week – and ministers have drawn up legislation to unilaterally suspend checks on goods flowing from Great Britain to Northern Ireland.

The Northern Ireland Protocol is threatening the stability of the United Kingdom, Boris Johnson (pictured in April) claimed last night

Foreign Secretary Liz Truss will tell European Commission vice president Maros Sefcovic in a call this morning that the EU must move or the UK will act unilaterally.

And at a press conference in Sweden yesterday, Mr Johnson said the protocol needed to be sorted out when he was asked whether now was the right time to pick a fight with Brussels.

Pro Europe Brexit protesters in Parliament Square on Wednesday. As Brussels and Washington urged London not to scrap parts of the post-Brexit deal, the Prime Minister said there was no need for ‘drama’

What is the NI Protocol?

The protocol is a special Brexit deal for Northern Ireland. It was negotiated by the UK Government to avoid a hard border with the Republic of Ireland, by effectively keeping the province in the European Union’s single market for goods.

What is the issue?

Northern Ireland continues to follow some EU laws under the protocol, and there are extra checks and paperwork for some products crossing over the Irish Sea from Great Britain. But not all the trade controls required by the Brexit agreement apply yet because of ‘grace periods’.

What is the EU’s solution?

Brussels has repeatedly ruled out renegotiating the protocol and believes solutions can be found without changing the agreement. It has proposed to build on existing grace periods and cut 80 per cent of checks on some goods.

How has Britain responded?

Foreign Secretary Liz Truss said the EU’s proposals fell short and in some cases would ‘take us backwards’.

British sausages, for example, would need veterinary certificates to enter Northern Ireland, and products like New Zealand lamb could be unavailable. She has threatened to tear up parts of the protocol as early as next week if a negotiated solution cannot be found.

How would the EU respond?

EU leaders have threatened a trade war between London and Brussels if the UK takes unilateral action. Belgian PM Alexander De Croo said this week that if the protocol was revoked then ‘the whole system will be revoked’.

‘That is crucial for the stability of our country, of the UK, of Northern Ireland.

‘And it means that things have got to command cross-community support.

‘Plainly the Northern Ireland Protocol fails to do that and we need to sort it out.’

He later told the BBC: ‘Let’s face it, we’re talking about – really in the scheme of things – a very, very small part of the whole European economy and I think 0.4 per cent of the value of the whole of the EU economy in Northern Ireland.

‘It is crazy. I don’t think there’s any need for drama. This is something that just needs to be fixed.’

Cabinet minister Michael Gove yesterday insisted he was ‘super cool’ with threats to rip up the agreement – despite reports he was opposed to the plan.

‘We are going to negotiate with the EU in order to get the best possible outcome for the people of Northern Ireland, but no option is off the table,’ he said.

EU officials have accused Britain of acting ‘irresponsibly’ by threatening to tear up the protocol during the Ukraine conflict.

A Brussels diplomat told The Guardian that Britain’s move threatened the international alliance against Vladimir Putin and would ‘only worsen the standing of the West’.

US President Joe Biden urged the PM not to walk away from the protocol unilaterally.

‘The best path forward is a pragmatic one that requires courage, co-operation and leadership,’ a White House spokesman said.

‘We urge the parties to continue engaging in dialogue to resolve differences and bring negotiations to a successful conclusion.’

EU leaders have also warned against ripping up the deal, including German chancellor Olaf Scholz, who said: ‘No one should unilaterally cancel, break or in any way attack the settlement.’

Northern Ireland minister Conor Burns, who is the PM’s special representative to the US on the protocol, last night echoed Mr Johnson’s comments and said the deal was now the ‘greatest threat to the stability of the institutions that were born out of the Good Friday Agreement’.

But he insisted the UK wanted to ‘get this sorted in negotiations with our European friends and allies’ and said he was convinced there was ‘a landing zone’.

The nationalist party is now entitled to nominate a first minister – but the Democratic Unionist Party must nominate a deputy to serve alongside them in the joint office.

The Unionist party has vowed to continue its boycott of the power-sharing executive until ‘decisive action’ is taken on the protocol by the UK Government.

The protocol was negotiated by the Government to avoid a hard border with the Republic of Ireland, by effectively keeping Northern Ireland in the EU’s single market for goods.

But Unionists have been pushing for it to be scrapped because of the trade barriers it has created on products crossing the Irish Sea from Great Britain.