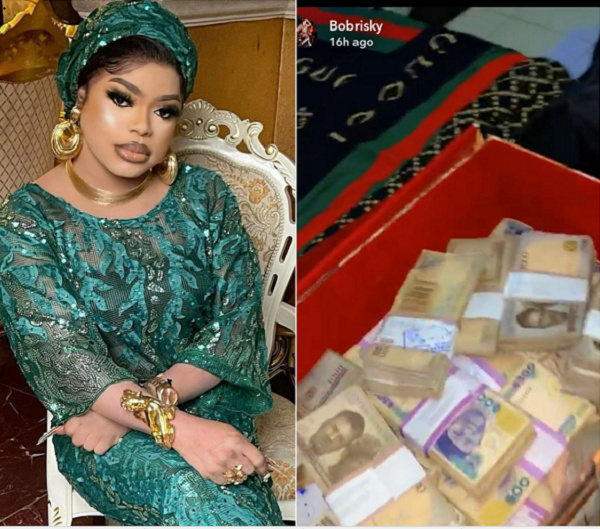 Bob reveals that he is being sponsored by a married man

Bobrisky worried he can’t give his male lover a child

Nigeria’s controversial crossdresser, Okuneye Idris Olarenwaju, better known as Bobrisky has once again flaunted money received in a concealed box from his lover, who he reveals is a married man.

According to the male socialite who loves to be addressed as a woman, he received a whopping N10 million from his male lover to cater for his weekend expenses.

He proudly announced that the man, who he has vowed to protect his identity, had sent him 10 million Niara the previous weekend.

“Someone needs to hold me right now. My boyfriend just sent another 10million for the weekend. I still have the former 10m he gave me last week. I was lazy to go to the bank. Total money is now 20 million.

Regarded as the most-talked-about celebrity in his home country, Bobrisky, in a Snapchat video stated: “This night, my boyfriend called and said, babe, they are bringing you some money for the weekend…seriously guys, what do you think I should do to this man. Why do I deserve this man?” he quizzed.

Bob in the video is quoted to have said: “He is actually married with kids but it hurts me so much that I am not able to give this guy a child… what can I do to compensate him?”