Blond woman one of four arrested and luxury clothes, jewellery and Mercedes seized in Sydney 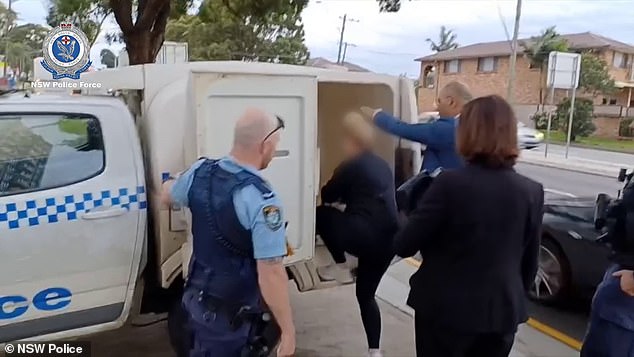 
Female accused fraudster is dragged out of bed at 5am and handcuffed in her trackies – as cops smash $1million alleged fraud syndicate and seize luxury clothes, jewellery and a Mercedes Benz

A woman and three men have been charged over an alleged $1million fraud and identity syndicate – with cops seizing about $130,000 in cash, luxury jewellery and clothing and a Mercedes C200 valued at up to $76,900.

NSW Police footage shows a 42-year-old woman being arrested and forced into the back of a wagon in Bankstown, in Sydney‘s south-west, in the early hours of Friday morning, as well as a 33-year-old man in a hoodie, believed to be her partner.

Police will allege in court that the man was the leader of the syndicate, which allegedly involved two other men, aged in their 20s, who were both likewise arrested at units in Haymarket and Pyrmont.

Police stormed the couple’s apartment about 5am. Prosecutors will allege the syndicate created a number of shell companies to obtain cheque books, EFTPOS terminals, and create banking profiles which were then used to procure fraudulent funds.

The man was charged with 52 offences, including 39 counts of deal with identity info to commit indictable offence, 11 counts of dishonestly obtain financial advantage by deception, deal with property proceeds of crime more than $100,000, and knowingly direct activities of criminal group.

Both were refused bail to appear at Bankstown Local Court on Friday.

Four people have been charged after a criminal syndicate in Sydney involving multiple identity and banking frauds of more than $1 million was intercepted (pictured, a 42-year-old woman was one of the four people arrested)

Police will allege the fraudulently obtained funds were then used to withdraw cash, purchase clothing, motor vehicles, and jewellery, and pay for day-to-day expenses.

Two other men – 29 and 39 – were arrested at units in Pyrmont and Haymarket.

They were refused bail and appeared at Downing Centre Local Court on Thursday, where they were formally refused bail to appear in court on August 18.