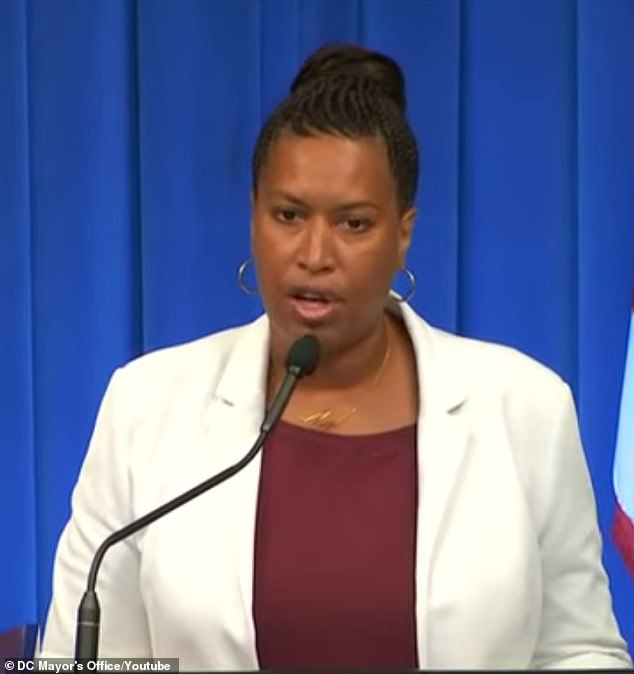 Texas Gov. Greg Abbott and Arizona Gov. Doug Ducey have been shipping thousands of illegal immigrants to the nation’s capitol to spread out the burden of a surge in illegal immigration since the president decided to lift a pandemic-era emergency health order that restricted migration on the southern border.

Since April, the Associated Press reports, Abbott has sent at least 5,200 migrants to DC, while Ducey has sent more than 1,000 migrants since May.

Those illegal immigrants often arrive in DC without resources and a place to go, DC Mayor Muriel Bowser has said, and is straining the city’s ability to deal with its own homeless residents.

She therefore requested last month that the federal National Guard deploy 150 members each day to deal with the crisis, and create a ‘suitable federal location’ for a mass housing and processing center — suggesting the DC Armory as a potential location.

But on Friday, the Defense Secretary Lloyd Austin declined the request, saying troop ‘readiness’ may be affected if the National Guard were to divert its members to the city.

He also declined to provide the DC Armory to the city to assist with the reception of migrants to the city, claiming that the Department of Defense has determined that FEMA’s Emergency Food and Shelter Program has sufficient funds ‘at this point to provide migrant assistance.’

Since April, Texas Gov Greg Abbott has sent at least 5,200 migrants to DC, while Arizona Gov Doug Ducey has sent more than 1,000 migrants to the city since May

She said in a news conference on Friday that the city plans to resubmit ‘a more specified request for help’ as they continue to work toward making the Armory a processing center.

Bowser also rejected the two Republican governors’ assertions that the migrant journeys are voluntary, and are part of an effort to reunite families in the United States.

Instead, she said, the migrants are being ‘tricked,’ as many do not get close enough to their final destination and are being ditched at Union Station near the US Capitol and the White House.

She then accused the two Republican governors of ‘cruel political gamesmanship,’ and said they had ‘decided to use desperate people to score political points.’

‘We want to continue to work with the Department of Defense so they understand our operational needs and to assure that political considerations are not a part of their decision,’ Bowser said.

‘We need the National Guard,’ Bowser continued. ‘If we were a state, I would have already done it.’

She explained that a coalition of local charitable groups have been working to feed and shelter the migrants, aided by a $1 million grant from FEMA, but the organizers are running out of funds and personnel to deal with the growing problem.

‘The reliance on NGOs is not working, and is unsustainable — they are overwhelmed and underfunded,’ Bowser said, adding: ‘If the federal government is not going to do it, they need to at least give us the resources that we need.’

Now, Abbott is sending migrants to the Big Apple as well, with the first busload of Central American migrants awaiting their court date arriving in the city on Friday.

Bowser has said the influx of migrants to the nation’s capitol has strained its ability to deal with its own homeless residents. About 30 migrants are pictured here disembarking after arriving to DC from Texas on July 29

The DC mayor has also claimed that the migrants are being ‘tricked’ to board the buses to the city. Migrants from Venezuela are seen here disembarking within view of the US Capitol on August 2

The group was dropped off at the Port Authority Bus Terminal in Manhattan after making the almost 2,000-mile trip from the border that lasted days.

A group of charity workers and volunteers greeted the roughly 50 migrants, who were mostly men, before they ventured into the city for hotels or shelters.

One of the arrivals Jose Rodriguez, 38, told DailyMail.com he chose New York because it has the ‘best opportunities’ of the options he was given when he crossed the border.

He added that the group wasn’t allowed to leave a building in Texas building they were housed in and he lost all of his documents in his journey over the Rio Grande.

Bertilio Rosale, 54, also told DailyMail.com on arrival: ‘I want to see the Statue of Liberty and the rest of the city. There are more job opportunities here, I will do anything I can. The bus here was good, we have all come from all over.’

But much of the group had only been told 24 hours before that they were being moved, with many losing any form of identification when crossing the river.

The first footage of the bus arriving in New York at 6.30am Friday was captured by Fox News, as the The Legal Aid Society and the Coalition for the Homeless blasted Abbott’s decision to send the migrants to the Big Apple.

‘Governor Abbott is shamelessly exploiting these migrants – human beings who have endured immense suffering in their home countries and on the journey to the United States, seeking safe haven and a better life – to serve some myopic political purpose,’ the organization said in a statement.

‘Regardless of who these people are, where they are from, or for what cynical reason they are being sent here, New York is a sanctuary and right to shelter city, and the City must ensure that beds and critical services are immediately available to meet any demand.

‘As representatives of homeless New Yorkers and the legal team who secured New York’s historic right to shelter law, we will continue to monitor this development, including onsite at the City’s shelter intake centers for both individuals and for families.

‘We call on City Hall to immediately provide this Administration’s plan for addressing the needs of all migrants arriving in New York City and requiring our help.’

The first bus of migrants sent from Texas by Governor Greg Abbott arrived in New York City on Friday morning at around 6.30am

The group was dropped off at Port Authority Bus Terminal in Manhattan after making the almost 2,000-mile trip from the border in footage captured by Fox News

A group of charity workers and volunteers greeted the roughly 50 migrants, who were mostly men, before they ventured into the city

Abbott has said he decided to ship the migrants to New York and DC after speaking to leaders in Uvalde and Del Rio who said they couldn’t cope with the number of arrivals.

‘And they were talking about getting the illegal immigrants that border patrol had dropped off into their communities that they were incapable of dealing with, and them actually busing them to San Antonio,’ he told the Conservative Political Action Conference.

‘I said don’t do that. I have a better idea.

‘We’re gonna bust him all the way to Washington D.C.

‘We deal with that number every single day, I got one thing to tell you and to tell them there are more buses on the way as we gather at this conference today.’

The audience responded with whoops and cheers, before Abbott plugged a crowd-funding website that helps pay for the buses.

He then announced on Friday: ‘Because of President Biden’s continued refusal to acknowledge the crisis caused by his open border policies, the State of Texas has had to take unprecedented action to keep our communities safe

‘In addition to Washington, D.C., New York City is the ideal destination for these migrants, who can receive the abundance of city services and housing that Mayor Eric Adams has boasted about within the sanctuary city.

‘I hope he follows through on his promise of welcoming all migrants with open arms so that our overrun and overwhelmed border towns can find relief.’

But Adams has already declared a city-wide emergency and called on the federal government to step in as a major influx of migrants strains New York City’s shelter system.

Roughly 4,000 asylum-seekers have come to NYC since May, Adams’ office stated.

‘New York is a city of immigrants, and we will always welcome newcomers with open arms. Over the past two months, we have seen a significant increase in the number of asylum seekers arriving in our city’s shelter system,’ Adams said in a statement.

He pledged that he will ‘continue to work with federal and state partners to procure additional financial resources immediately’ to assist with the surge.

Speaking of Abbott’s decision to ship migrants on Friday, Republican Senator Lindsey Graham said: ‘We have lost operational control of the border’.

In June, 240,991 migrants were caught crossing the border, including six who were on a terror watch list.

It was a 14 per cent decline from May, but the surge in crossings over the last year has broken records.

Twenty-six percent of all crossers in June had previously attempted to cross the border within the last year, which is up from the usual 15 percent between 2014 and 2019, CBP said.

The largest group to come through was single adults, making up 68 percent of the crossing, with 140,197 people.