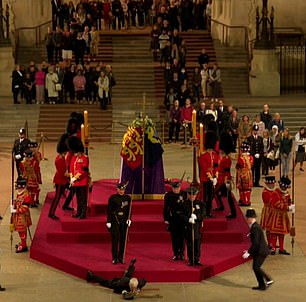 
A Beefeater who held vigil at the Queen‘s coffin says the guard who fainted off the podium on Wednesday evening ‘recovered shortly afterwards’.

Scottish RAF veteran Tam Reilly witnessed the drama last night while watching over the late monarch as she lied in state inside the Palace of Westminster – a role the proud Dundonian described as ‘an absolute honour’.

It came as thousands of mourners joined the queue to pay their final respects to the monarch following her death at Balmoral last Thursday.

But onlookers were aghast when a guard began swaying on his feet moments before he collapsed.

The man had moments earlier briefly stepped off the podium before retaking his place as other servicemen joined him for a changeover.

The moment the guard fell forward onto the stone floor as police officers quickly rush to his aid yesterday evening, left, with Beefeater Tam Reilly, pictured right as he stood guard.

But seconds later he blacked out and fell forwards, landing sprawled on the stone floor to loud gasps from bystanders queueing to pay their respects.

The live stream also cut out for several minutes as police rushed to the man’s aid.

Asked on Twitter how the guard was doing, veteran Tam – who spent 35 years with the RAF before becoming the Tower of London’s 414th Beefeater in February – said: ‘As far as I know he recovered shorty afterwards.’

Mr Reilly, joined the RAF Regiment aged 23 and has since been stationed across the country, most recently serving as a Training Assurance and Training Support Warrant Officer at RAF Honington.

Tam Reilly, an RAF veteran from Scotland, said standing vigil over the Queen last night was an ‘absolute honour’ and added that the guard who collapsed ‘recovered shortly afterwards’.

At the age of 55 he became swapped uniforms to join the other 32 Yeoman Warders (YW) who live and work within the Tower of London as one of its famous ‘Beefeaters’.

Yeoman Warders have been guarding the Tower of London since Tudor times, with members of their ranks drawn from all three branches of the military.

The Yeomans Warders, alongside personnel from the Sovereign’s Bodyguard and Household Division, have been drafted in to defend Her Majesty’s coffin around the clock.

It comes after crowds lined the streets of central London as she was moved from Buckingham Palace to Westminster Hall on Wednesday afternoon.

King Charles, William and Harry reunited to mourn and march behind the coffin it made its final journey out of Buckingham Palace at 2.22pm.

A short service was held involving the Royal Family at the Palace of Westminster, before members of the public were given access to pay their respects from 5pm.

As the late monarch’s coffin was placed in the hall, photos captured a poignant moment for the Duke of Sussex as he held his head in his hand, shielding his eyes, and looked down.

Wearing a suit decorated with medals, he is standing next to the Duchess of Sussex, who is looking down with a sombre expression on her face.

The Queen: All you need to know following her passing and a look back at her 70-year reign

Prince Harry and his brother Prince William stood together with their wives Meghan and Kate as they put aside their bitter feud to pay their respects to their grandmother.

While the siblings walked side-by-side for the poignant 38-minute procession from Buckingham Palace, their spouses travelled in separate cars, with Meghan accompanied by the Countess of Wessex and Kate joined by Camilla, the Queen Consort.

During the service, the ‘Fab Four’ stood in formation facing the coffin on its purple-covered catafalque, which was flanked with a tall, yellow flickering candle at each corner of the wide scarlet platform in the heart of Westminster Hall – the backdrop of some of the most famous moments in British history.

The Sussexes stood at the back of the group of royals, with Harry directly behind William and Meghan behind Kate. The touching moment is the first time the couples have been seen together since their surprise walkabout together at Windsor Castle on Saturday, and a rare show of togetherness.

The Queen’s coffin entered Westminster Hall as the choir of Westminster Abbey and the choir of His Majesty’s Chapel Royal, St James’s Palace, sang Psalm 139. When the Queen arrived, Charles, William and Anne saluted. Harry and Prince Andrew – barred from wearing military uniform – bowed their head instead.

Thousands of well-wishers have passed through the historic hall throughout the evening and into the early hours of this morning.

Mourners waiting to pay their respects have been given colour-coded wristbands in order to temporarily leave the queue to buy food and use the toilet.

Stewards staffing the route have also been advised to spot people who may be struggling, take them out of the queue for a ‘cup of tea’. They may then be allowed closer to the front.

The Palace of Westminster will remain open 24 hours a day until 6.30am on Monday – the day of the Queen’s funeral.