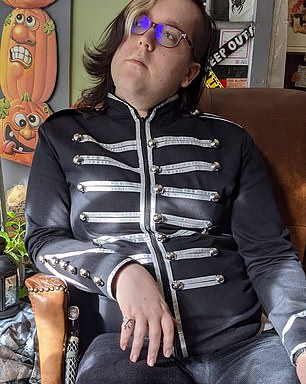 
The BBC promoted an ‘all-women final’ in a quiz contest where one of the contestants was transgender.

Radio 4’s Russell Davies said it was ‘all-women’ first for the 69th Brain of Britain decider on Monday.

And on Women’s Hour yesterday presenter Emma Barnett described it as a ‘historic’ occasion.

But some listeners took issue with the fact that one of the finalists – Emma Laslett – is a trans woman.

One wrote: ‘If four trans women turned up you’d still claim it was an all-woman final and a great achievement for women. How utterly ridiculous.’

It comes after the BBC was criticised for its relationship with under-fire LGBT charity Stonewall.

The corporation had been part of its Diversity Champions programme but withdrew last November due to what it called a ‘risk of a perception of bias’.

The BBC promoted an ‘all-women final’ for its Brain of Britain quiz contest, even though one of the contestants, Emma Laslett (above) is Transgender

Another tweeted: ‘Don’t want to be churlish but this was not a 100 per cent female line-up.’

Mr Davies had told listeners: ‘In case you were wondering, yes we think this is the first ever all woman final of Brain of Britain.’

Maya Forstater, of campaign group Sex Matters, said: ‘The sad thing is that whenever the first Brain of Britain contest with four female contestants really does happen it will go unremarked.’

But Twitter user Rubin Remus said: ‘Instead of enjoying Brain of Britain like a normal listener, [other Twitter users] complain about them not misgendering a trans woman.’

Miss Laslett is a charity worker from Milton Keynes. The Oxford graduate previously competed in the semi-final of long-running BBC TV quiz show Mastermind (above)

A BBC spokesman did not respond to a request for comment.

Her specialist subject was the Eurovision song contest, from 1981 to the present day.

She finished second from last on this year’s Brain of Britain, garnering 13 points.

Radio 4’s Russell Davies (left) said it was ‘all-women’ first for the 69th Brain of Britain decider on Monday. And on Women’s Hour yesterday presenter Emma Barnett (right) described it as a ‘historic’ occasion

The other Brain of Britain finalists were all past quiz show winners.

Marianne Fairthorne, a quantitative analyst from from London, was the winner of the Mastermind in 2015.

Her specialist subject was the life of Caterina Sforza, a 15th Century Italian noblewoman.

Isabelle Heward, from Lincolnshire, won Mastermind at the age of 61 in 2017, with the subject of the ‘life and films of Billy Wilder’.

When she appeared on Mastermind, Miss Laslett’s specialist subject was the Eurovision song contest

She and her husband Noel Kelso walked away with he £5,250 jackpot.

Brain of Britain has aired every year since 1963, although originally appeared a decade earlier on another show, What Do They Know?

Brain of Britain sees four contestants attempt to answer questions, with bonus points awarded if five in a row are answered correctly.

While part of Stonewall’s Diversity Champions scheme, the BBC showed staff a controversial ‘genderbread person’ graphic that was part of equality training material put together by the charity.

An investigation by Nolan Investigates, a podcast run by 5 Live presenter Stephen Nolan, found that the image was presented to employees as part of an internal BBC course set up in conjunction with the lobby group.

The ‘genderbread person’ graphic depicts sex as a spectrum and defines gender identity as ‘how you think about yourself’. It was apparently shown to BBC staff with no alternative explanations despite these ideas being contested.

The BBC’s decision to sever its relationship with Stonewall came after a slew of other organisations including Ofsted and Channel 4 also left the scheme.

Maya Forstater, of campaign group Sex Matters (pictured above) said: ‘The sad thing is that whenever the first Brain of Britain contest with four female contestants really does happen it will go unremarked’