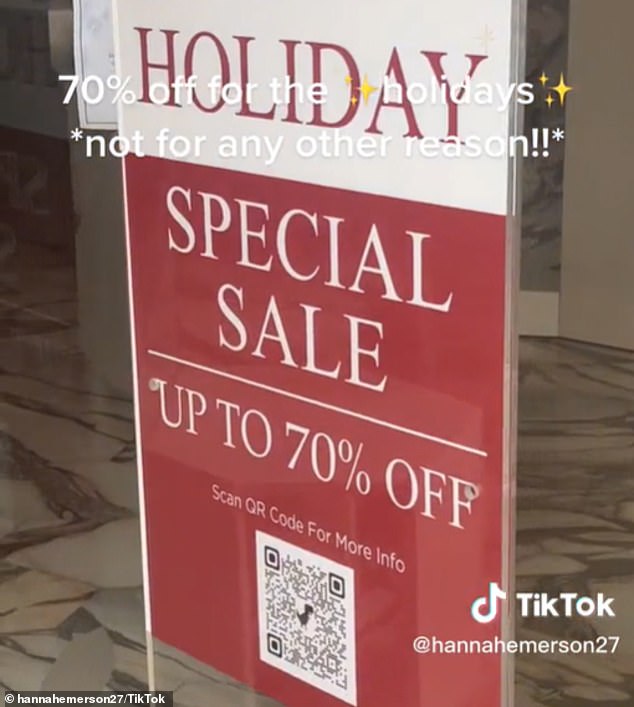 
Scandal plagued French fashion house Balenciaga is expected to report devastating profits this week after TikTok users showed that the brand was marking down its high-end items for as much as 70 percent off.

This comes as one of the brand’s biggest ambassadors, Kim Kardashian, slashes prices on her the brand on her clothing resale site, Kardashian Kloset. Like many, Kardashian cut ties with Balenciaga in December.

Creative director Denma said: ‘I want to personally apologize for the wrong artistic choice of concept for the gifting campaign with the kids.’

Last year, Balenciaga was accused of participating in a pedophile ad campaign which has resulted in sales across the country

Among the items being resold by Kim Kardashian is this rate Belanciaga dress that has been marked down from $13,000 to $10,000

According to HSBC, the fourth-quarter results for Balenciaga’s parent company Kering are likely to be ‘as bad as it gets’ with the controversy severely impacted the company’s holiday sales. The report is due out on February 15.

The HSBC report, first referenced by WWD, points to slowing growth in the UK, US and China.

Reality star and TikToker Holly Scarfone posted a clip showing a collection of Balenciaga purses bundled together on a table inside of a Bloomingdale’s store. It’s unclear where the store is located.

She titled the video: ‘Never thought I’d see the day.’ Scarfone says: ‘I don’t think I’ve ever seen a designer being so heavily marked down.’

While another social media user, @St3vensuniverse, posted a video showing sneakers and leather shoes, including high heels, bearing the Balenciaga name being marked down at Nordstrom. That video was titled: ‘Would y’all still buy Balenciaga?’

Fine Britches, another TikToker, posted a video showing a collection of Balenciaga sneakers on table at Neiman Marcus advertising: ‘Save up to 50 percent off!’ He wrote in the caption: ‘Balenciaga really taking Ls.’

Prior to the fire sale, many TikTok users had gone viral as the posted videos showing them destroying their Balenciaga wears

Department stores appear to be following the lead set up one of the brand’s former figure heads, Kim Kardashian, who cut ties with Balenciaga following the scandal

In an actual Balenciaga store, TikToker Hannah Emerson posted a video in early December showing the location advertising a ‘Holiday Sale.’ Emerson noted in her video how dimly lit the store was, showing that it looked closed and how few staff were working.

Prior to the fire sale, many TikTok users had gone viral as the posted videos showing them destroying their Balenciaga wears including KamillonT who burned her sneakers as another, Gianna Avalos, cut up a tote bag.

Department stores appear to be following the lead set up one of the brand’s former figure heads, Kim Kardashian, who cut ties with Balenciaga following the scandal.

On her resale site, Kardashian Kloset, the reality star has slashed prices on items such as a Balenciaga hoodie, where she knocked $200 off the original price and sweater, marked down from $895 to $445.

Meanwhile on social media, disenchanted consumers are burning their Balenciaga goods in protest

Retailers such as Lyst are selling a pair of Balenciaga sunglasses for $200, after they were originally priced at $685. On the same site, a belt that retailed at $475, now costs $285.

The website Children Salon is charging $237 for a pair of Balenciaga shoes, marked down from $475.

West posted a video online in which he advertised Balenciaga hoodies that he was selling for just $20. The sale did not appear to have anything to do with the campain.

Vandalism on an empty store on Rodeo Drive last night in a clear protest against the brand, whose own store is nearby

The photographer who took pictures of children carrying teddy bears wearing S&M gear for Balenciaga’s adverts said that the kids who modeled for him were children of employees – who were present when the photos were taken.

Italian documentary photographer Gabriele Galimberti, 45, has insisted he did not think the images he took were disturbing – despite receiving death threats and being called a pedophile when the photos were published.

Galimberti, whose work has been featured in National Geographic, Le Monde and Marie Claire, said that he was shocked by the virulent response, but stressed that he had nothing to do with styling the shoot or selecting the theme.

‘I can recognize if we are going too far or not, but in that occasion I trust them and I didn’t see anything so wrong,’ he told The Guardian.

He said the children in the photos were the offspring of Balenciaga employees, who accompanied them to the shoot and did not raise any concerns.

‘When they saw those bags, everybody was telling them they were punk,’ he said.

In a statement following the initial fallout, Balenciaga apologized and said that investigations into the ad campaigns were ongoing.

It said the papers featuring the legal text on child pornography were props from a third party and that it had filed a complaint against the inclusion of the ‘unapproved documents.’

Kering CEO Cedric Charbit said the label had decided not to pursue litigation.

‘I want to personally reiterate my sincere apologies for the offense caused and take my responsibility,’ said Charbit.

In the photo shoot, the kids also appeared surrounded by empty wine and champagne glasses.

The distinctly adult themes immediately troubled many who asked why children had ever been used.

Balenciaga ignored the scandal at first and seemingly allowed the photographer who was involved, Gabriele Galimberti, to take the heat.

He released a statement saying he had no control over the content of the shoot and eventually, Balenciaga released its own statement agreeing with him and taking responsibility for the campaign.

It has now been pulled from the internet.

On the back of the bears scandal, many critics said it pointed to a troubling pattern within Balenciaga.

Balenciaga was quick to blame North Six, a production company that helped arrange the shoot, for the inclusion of those documents.

They claimed that they entrusted all of the props from the photoshoot to North Six, and that their team was assured everything that was included was fake.

Balenciaga is yet to answer for the inclusion of a book by Michael Borremans in the background of two of the images from the Spring ’23 campaign.

Borremans is a Belgian painter whose work includes a troubling 2017 series called Fire From The Sun.

It depicts naked toddlers – some of them castrated – playing in a group and at times alone.

Lawyers for the brand are yet to address DailyMail.com’s questions about how the book ended up on the photoshoot.

In this image from Balenciaga’s scrapped Spring ’23 campaign, Isabelle Huppert sits in front of a stack of books including one that celebrates Michael Borremans, a Belgian painter whose work is known to include depictions of castrated toddlers

Borremans’ other work includes his 2017 series Fire From The Sun, which features castrated toddlers and babies holding what look like severed limbs, while playing together nude in a large group