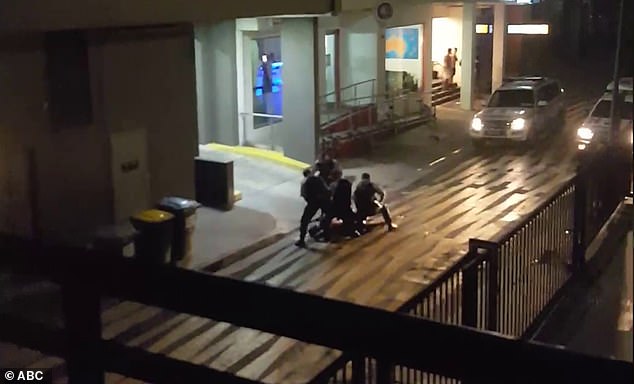 
A 16-year-old autistic boy who was hit 18 times by police batons while lying naked on the ground, has spoken out almost five years after the night that changed his life.

Dylan – not his real name – is now aged 21 and is still hugely affected by what happened to him in the early hours of January 11, 2018.

He was in the northern NSW town of Byron Bay on a family holiday and his mum, Katie – not her real name – reluctantly allowed him out to a silent disco by the beach.

Another teenager at the disco handed Dylan a beer, which turned out to have been spiked with a drug.

‘I didn’t feel like I was in my own body, [it was] like someone else was in control or something,’ Dylan told ABC’s Background Briefing program.

Dylan wanted to get back to his family, but he was wandering around in a disorientated state and had taken off all his clothes.

The manager of a backpacker hostel in Lateen Lane was concerned about what was happening and called the police.

Within five minutes, two officers arrived in a patrol car.

But Dylan’s vision was blurred from the effects of the drug his drink had been spiked with and he did not realise they were police.

What happened next, and how it happened, is the subject of dispute and has been investigated in a police disciplinary hearing and in courts.

The police said Dylan tried to punch an officer but failed to connect, but other witnesses did not report seeing any punch.

An officer took out a pepper spray and warned Dylan to ‘calm down mate’ or the spray would be used on him.

Dylan started to walk towards the officers, but he had his eyes closed.

‘It was ugly, very painful like your whole body was just, like, in pain and just shaking,’ he said.

Dylan was then hit in the knee with a police baton and was wrestled to the ground by officers.

A woman on a nearby balcony, who had heard the commotion, started to film the incident on her mobile phone.

The clip, which lasts two minutes and 49 seconds, started out with Dylan screaming ‘Please help’ followed by the shocking sound and vision of police officers hitting him with batons.

One of the four officers who were surrounding him said ‘OK mate, just settle down’ but Dylan screamed out for them to ‘Put me on my back.’

Dylan’s leg is then seen moving and the officers tell him to ‘Stop it.’

One of them begins hitting him with a baton.

Another officer said ‘Give me your hand,’ so as to handcuff him.

Police in the video can be seen standing on the handcuff chain while another officer brings their vehicle closer.

As the vehicle arrived, the fierce beating continues as an officer shouts ‘Stop resisting.’

Dylan said he wasn’t resisting them.

As the police explain they are going to stand him up and walk him to the truck, Dylan is struck one more time – the 18th time.

A witness told a court that an officer wandered over to onlookers and said ‘you better not have f***ing recorded this’.

That officer said it was ‘ridiculous’ to suggest he made the comment. He claims he was asking them if they had recorded it, hoping they had done so.

Dylan woke in a hospital bed, his body was black and blue and one of his ribs had been fractured.

He had no idea what happened to him but will never forget what a hospital staffer said to him.

‘She said that I should apologise to police for causing such a problem,’ Dylan recalled.

He found out at least some of what happened a few months later when the clip was shown on Channel 9’s A Current Affair.

‘That first time watching it I was like, numb … I remember it was just weird seeing it from that angle and just hearing it like that – strange,’ Dylan told the ABC.

He later found the video on Facebook and was angered by the comments.

‘It was like a hundred comments of people saying ‘Good on the police,’ ‘Good job’, ‘Probably a young junkie’. I remember seeing that comment.

Katie said when she saw the video she ‘threw up. I couldn’t believe what I was watching.’

People are pictured at Main Beach in Byron Bay on March 29, 2021. The town is famed nationally and internationally for its party culture

Other students at Dylan’s school soon realised it was him on the video.

His grades fell and he dropped out of school.

He had horrific nightmares and started to get flashbacks to the night.

Katie heard from Dylan’s friends that things were worse than she thought.

‘He would never have considered taking his own life, but by the time he was 18, there were plenty of times that he told people close to him that he no longer wants to be in this world,’ she said.

‘In our faith we are taught that if you take your own life, you don’t go to heaven.’

Police officers can use force to keep themselves and the public safe, but it has to be ‘reasonable force’ under NSW law.

The LECC focused on the final six strikes, when Dylan was on his back, with an officer’s boot on the chain of his handcuffs.

One officer told the commission the strikes were ‘unnecessary’ and a ‘bit over the top’.

But the officer who delivered those final six blows said they were necessary to restrain Dylan as he was still struggling.

The final report was released seven months later and said ‘It is obvious that (the) intention was to beat (Dylan) until he complied and, even when he was handcuffed,(the officer) did not desist,’ it said.

‘The commission finds that (the) use of his baton represented a use of grossly excessive force for which there was no justification.’

The final six strikes were found to be ‘unreasonable, deliberate, grossly excessive and significantly beyond a mere error of judgement’.

The report said consideration should be given to prosecuting one of the officers with assault.

In October 2019, Senior Constable Michial Greenhalgh – the officer who hit Dylan with the final six strikes of his baton – was charged with common assault.

He denied those last six strikes were excessive, saying though Dylan was unarmed, he was violent and continued to struggle and kick out even after he was handcuffed.

Other officers said Dylan has resisted them with ‘extraordinary physical strength’.

Magistrate Michael Dakin gave his verdict, he said he preferred the officers’ version of what happened and said evidence by civilian witnesses had been contaminated by seeing the video before the trial.

He said the gaps between Greenhalgh’s baton strikes proved the officer’s actions were not reckless.

‘The telling part of the evidence, to my mind, is the video evidence of these baton strikes … If it were, in my view, the case that the defendant had acted in the red fog, or red mist … there would not be any gap between the strikes,’ the judge said.

The case was appealed to the NSW Supreme Court in July 2022 and has been sent back to Magistrate Dakin in Lismore court to be redetermined in February 2023.

In a statement to Daily Mail Australia, the police said ‘The officer involved is no longer employed by the NSW Police Force’

Dylan still bears the scars from the night that changed his life forever. There are still two parallel white scar lines on his wrist at the point where police fastened the handcuffs on him.

But it is the mental scars that are more troubling to Dylan, and have been for almost five years.

‘I know … they have a lot to deal with and it can sometimes be life or death situations,’ he said.

‘But my situation – what happened to me – wasn’t a life or death situation at all. It’s not like I was an imminent threat of violence.’

In a statement issued to Daily Mail Australia the NSW Police said ‘An internal investigation was conducted into the incident and the matter was referred to LECC.

‘As the matter remains before LECC, it would be inappropriate to comment further.

‘The officer involved is no longer employed by the NSW Police Force.’

Share. Facebook Twitter Pinterest LinkedIn Tumblr Email
Previous ArticleSnow continues to pummel western New York as metro Buffalo digs out from up to 6 feet of accumulation
Next Article “Cheers to victory” – Korra Obidi rejoices as she wins custody of her children and finalizes her divorce