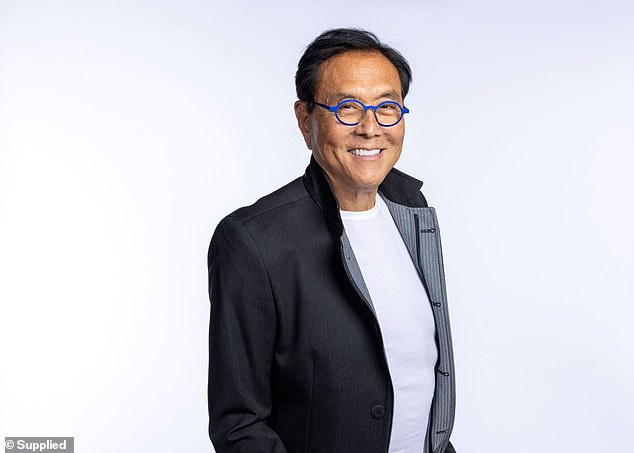 
Rich Dad Poor Dad author Robert Kiyosaki is expecting Australian house prices to crash after rising by the third-fastest pace in history – because of speculation.

In records going back to 1880, that was the third-fastest in Australian economic history.

Kiyosaki, whose bestselling book in 1997 talked up the importance of stable real estate investment, said too much of Australia’s property market boom was based on the Reserve Bank of Australia pumping money into the financial system.

‘It’s good for a while. You guys can keep flipping houses, all this stuff, but I’m doing my best to warn you that something might happen,’ he told Daily Mail Australia from Phoenix in Arizona.

Between March 2020 and June 2021, the Reserve Bank gave $188billion to the banks to provide cheap home and business loans, which Kiyosaki said led to real estate speculation

Between March 2020 and June 2021, the Reserve Bank gave $188billion to the banks to provide cheap home and business loans.

‘You guys are a bunch of punters, you gamble a lot,’ Mr Kiyosaki said.

‘There are too many Aussies and people all over the world, they’re flipping houses.

‘None of us alive have ever been here.’

‘Although we can’t see any evidence that specific housing markets have peaked, it is clear that most markets have moved through a peak rate of growth,’ he said.

House and unit prices in 2021 surged by 22.1 per cent in 2021 (pictured is an auction at Hurlstone Park in Sydney’s inner west last year)

‘What I mean by that is the point at which markets achieved their biggest monthly growth rate.

‘We saw most of the capitals moved through a peak rate of growth around March last year.’

PropTrack economist Paul Ryan noted the 22.1 per cent rise in Australian property prices, in 2021, was the third fastest in historical records going back to 1880.

Only 1989, with a 29 per cent annual growth rate during an era of 17 per cent interest rates, and 1950, with an 111 per cent surge after the war, had the fastest property price increases.

‘The only broad regions avoiding a slowdown in the pace of growth in housing values are Brisbane, Adelaide and regional Queensland,’ Mr Lawless said.

‘These markets are benefitting from a healthier level of affordability compared with the largest capitals along with a positive demographic trend and consistently low advertise stock levels.’

Sydney and Melbourne were expected to peak late this year.

‘Although the timing is highly uncertain and depends on a broad range of influences,’ Mr Lawless said.

Both the Commonwealth Bank and Westpac are expecting the pace of property price growth to slow in 2022 with falls expected in 2023.

Reserve Bank of Australia Governor Philip Lowe had previously promised to keep the cash rate at a record-low of 0.1 per cent until 2024, before hinting that could happen in 2023.

The major banks have raised their fixed mortgage rates from historically-low levels below 2 per cent.

The Australian Prudential Regulation Authority has, since November, required lenders to assess a borrower’s ability to cope with a three percentage point rise in mortgage rates.

Metropole Property Strategists chief executive Michael Yardney said until the 1950s, most Australian homes in capital cities were near the central business districts.

‘Before the 1950s, land on the fringes of urban cities was both close to CBDs and relatively cheap,’ he said.

‘Once land close to cities became more scarce, along with the high levels of immigration into Australia in the ’50s, ’60s, and ’70s, prices started rising at a faster rate.’

‘At the same time it will be harder for first homebuyers to save a deposit,’ he said.

‘It would also be more difficult for tenants as rents are already rising and will continue to do so, so rental affordability will be another issue and it will be important to own investment properties in locations where tenants can afford to pay higher rent.’

PropTrack economist Paul Ryan noted the 22.1 per cent rise in Australian property prices, in 2021, based on CoreLogic data, was the third fastest in historical records going back to 1880. Only 1989, with a 29 per cent annual growth rate during an era of 17 per cent interest rates, and 1950, with an 111 per cent surge after the war, had fastest property price increases