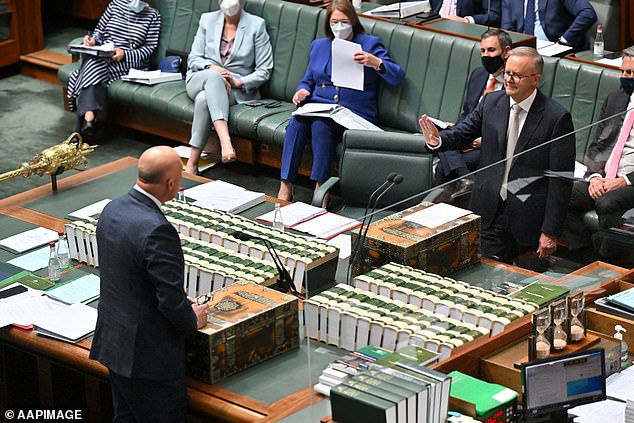 
New Prime Minister Anthony Albanese has opened his first Question Time in Parliament with a biting backhanded compliment towards new leader of the Opposition Peter Dutton.

Mr Albanese spoke after Mr Dutton grilled the PM in Canberra on Wednesday over his government’s plan to dismantle Australia’s construction sector watchdog.

‘My question to the Prime Minister is; officials from the CFMEU have been charged with thousands of offences. Has the Prime Minister met with any of the union bosses accused of criminal behaviour, including sexual assault, harassment and rape?’ Mr Dutton said.

The question sparked raucous shouting from the Parliamentary floor with the Speaker having to intervene.

‘I give the call to the Prime Minister. Order.’

‘Mr Speaker, if the Member opposite has an allegation or wants to know someone I met with, he should say it,’ Mr Albanese replied.

‘No, he has not. If he wants to name somebody, he is perfectly entitled to. But he is not entitled to do is to engage in that sort of smear tactics.’

Deputy Opposition Leader Susan Ley continued with the onslaught when she later stepped up to the microphone.

‘I refer to comments he (Mr Albanese) just made that the watchdog is a waste of taxpayer money.’

She said the ABCC was pursuing a union official over allegations of ‘pushing, shoving and verbally abusing a female health and safety manager’.

‘Does the Prime Minister seriously believe that pursuing this vile behaviour is a waste of taxpayer’s money, and why is Labor making a bad situation worse?’

Mr Albanese shot up from his seat to reply Ms Ley.

‘I believe if someone commits assault, they should be charged with assault and dealt with. That is what I believe. I am surprised that you don’t.’

Funding for Australia’s construction watchdog will be allowed to lapse if efforts to abolish the commission fail.

Employment Minister Tony Burke says he wants to see the Australian Building and Construction Commission abolished soon, with legislation to scrap the body to be introduced later this year.

The commission’s powers will be reduced to the bare minimum before reverting to the Fair Work Ombudsman and to health and safety regulators.

Mr Burke says should the legislation to abolish the watchdog not pass through the parliament, the funding would not be renewed.

‘Their funding on the pre-election costings that were released dries up anyway,’ he told ABC Radio on Tuesday.

‘There’s an extent that there’s minimum fees you have to pay for board members and things like that, that’s not unknown.’

However the head of the commission will still be paid his $450,000 salary.

Mr Burke says the salary will still have to be continued until the watchdog is repealed, due to it being a statutory appointment.

‘I would have loved to abolish the organisation yesterday,’ he said.

‘But, you know, in terms of legislative program, that legislation will come probably in a couple of months time.’

Independent senator David Pocock says there is a need to find a balance between ensuring workers have access to union support without intimidation returning to worksites.

Mr Burke says he has been in discussion with Senator Pocock about the legislation.

‘We’ve been in touch via text. There’s a conversation that we we haven’t had because this announcement obviously was was only made on Sunday,’ he said.

Opposition employment spokeswoman Michaelia Cash says there is confusion in the industry following the decision to scrap the watchdog.

‘The industry was expecting consultation period, an orderly transition period, certainly not having it rushed on them like this,’ she told ABC radio on Tuesday.

‘That is not a great start to a government that has only been elected a few weeks ago.’