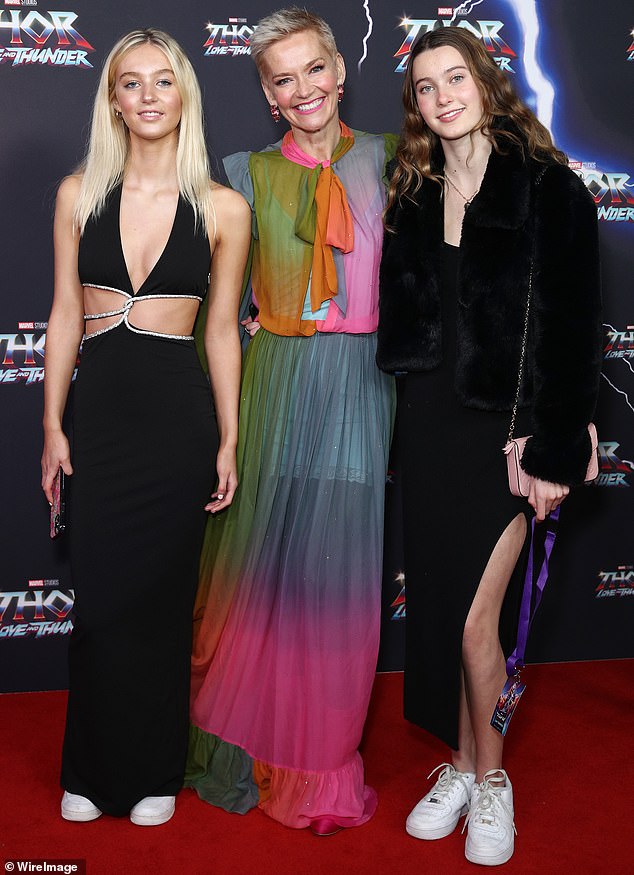 Rowe appeared on her former morning show Studio 10 on Thursday to declare she’s ‘sorry’ for Australia’s past and supports the campaign to move Australia Day to a date other than January 26.

‘I’m so sorry for what’s happened, I think we need to say sorry to move on,’ she said.

‘Today is not a date to celebrate at all and we need to change that date, well and truly the time has come.’

‘Let’s find a date that really celebrates who we are as a nation … this is what I’m hopeful about, (and) my daughters are very passionate about it,’ she said.

Studio 10 co-host Narelda Jacobs, a Whadjuk Noongar woman, added her own thoughts on Australia Day saying: ‘A lot of people associate patriotism with January 26 because it is the day that we are told we need to celebrate who we are as a country.

‘It’s just the date, we’re not saying don’t be a proud Australian and don’t be patriotic but just don’t do it today because there’s so much pain that comes with it.

‘This date isn’t the date to be celebrated because that’s when the trauma began.’

Australia Day has been shrouded in controversy for several years with Aussies divided over whether January 26 marks the beginning of modern Australia or the start of Indigenous oppression.

Rowe said it’s ‘well and truly’ time to change the date of Australia Day, considering what the date represents to Indigenous Australians (pictured, Indigenous activists in Melbourne on January 26)

Rowe (above) said it’s ‘well and truly’ time to change the date of Australia Day, considering what the date represents to Indigenous Australians

January 26, 1788, was the day the First Fleet landed at Sydney Harbour – after having abandoned plans to settle at Botany Bay to the south days earlier – with Governor Arthur Phillip raising the British flag to mark the founding of New South Wales.

Network 10 has given all its employees the choice to work Australia Day and take another day off instead of the public holiday.

US company Paramount – owner of Network 10 – chief content officer Beverley McGarvey and co-lead Jarrod Villani only referred to Australia Day as ‘January 26’ in an email sent to all editorial and programming staff.

‘At Paramount ANZ we aim to create a safe place to work where cultural differences are appreciated, understood and respected,’ the pair wrote in the email, first published by The Australian’s Media Diary column.

‘For our First Nations people, we as an organisation acknowledge that January 26 is not a day of celebration.

‘We recognise that there has been a turbulent history, particularly around that date and the recognition of that date being Australia Day.

‘We recognise that January 26 evokes different emotions for our employees across the business, and we are receptive to employees who do not feel comfortable taking this day as a public holiday.’

WHY ACTIVISTS ARE FIGHTING TO CHANGE THE DATE OF AUSTRALIA DAY

Australian activists have long fought to change the date of Australia Day.

January 26 marks the day the First Fleet arrived in 1788.

‘For many First Nations people this day is recognised as Survival Day or Invasion Day.

‘Because from this day in 1788 onwards, First Nations people suffered massacres, land theft, stolen children and widespread oppression at the hands of the colonising forces.

‘For First Nations people, January 26 is a day of mourning the history that followed the arrival of Sir Arthur Phillip and the First Fleet.

‘Many people believe that to truly celebrate this country we must find a date that includes all Australians.’