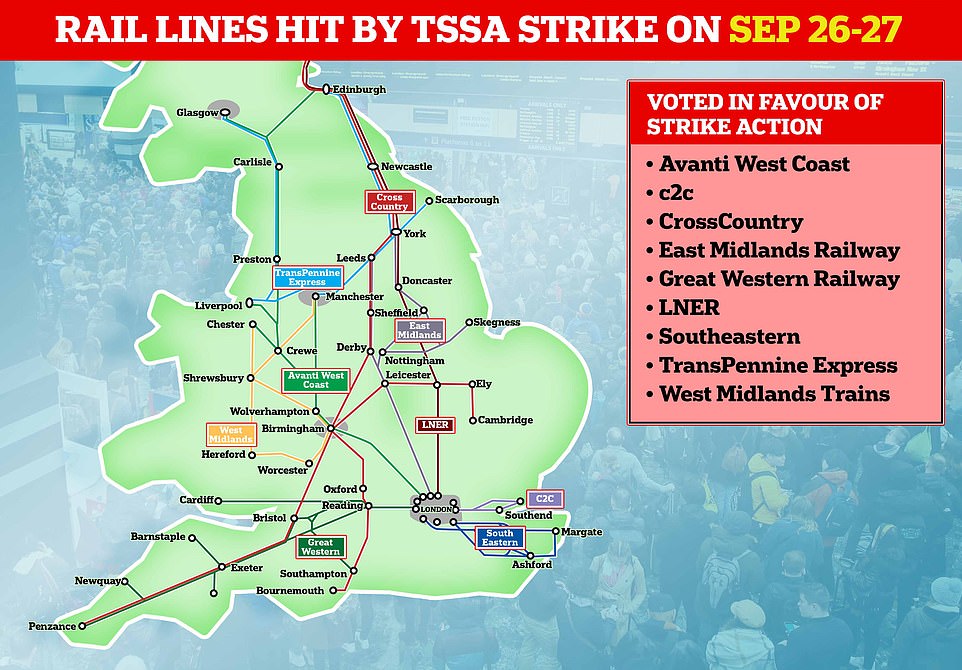 
Britain’s rail passengers will suffer further travel misery next month after two unions confirmed their workers will stage fresh strikes in an escalation of the national dispute over pay, job security and conditions.

Train drivers’ union Aslef said its members will walk out at 12 train operating companies on Thursday, September 15 in a dispute over pay that has already resulted in two other days of industrial action over the last five weeks.

In addition, members of the Transport Salaried Staffs Association (TSSA) at nine train operating companies as well as Network Rail will also walk out from midday on Monday, September 26 until the same time the following day.

The TSSA strike will coincide with the Labour Party conference in Liverpool. As a Labour-affiliated union, the TSSA said it will be looking for support from delegates and MPs to join them on picket lines – but Sir Keir Starmer will not join striking workers and insisted today that he would instead be focused on forming the next government.

The TSSA said it remains in talks with Network Rail about the possibility of a settlement to avert industrial action, but is urging Transport Secretary Grant Shapps to intervene in a bid to break the deadlock.

It follows seven previous rail strikes in recent months by Aslef, the TSSA and the Rail, Maritime and Transport union (RMT) that have caused chaos for commuters and those travelling around the UK for events and summer holidays.

The TSSA’s leader Manuel Cortes has written to both Mr Shapps and bosses of Department for Transport-held train companies in recent days. He wants the Government to allow operators to ‘return to the negotiating table with a revised deal which improves on the insulting 2 per cent offer which was rejected earlier in the summer’.

Which strikes are taking place in September?

Strikes or ballots for industrial action are being announced virtually every day as workers across the UK join the growing campaign for pay rises to match soaring inflation in the face of the cost-of-living crisis.

Unions have described it as a ‘summer of solidarity’ amid worsening industrial relations and accusations from union officials that the Government is doing little or nothing to help workers struggling with mounting bills.

Here are some of the upcoming strikes and potential disputes stretching into the autumn:

‘Frankly, he either sits across the negotiating table with our union or gets out of the way to allow railway bosses to freely negotiate with us, as they have done in the past.

‘The reason for the current impasse lies squarely at Shapps’ door and passengers are paying a high price for his incompetence and intransigence.

‘I welcome the fact that negotiations are ongoing with Network Rail and the gap towards a resolution is narrowing. Time will tell whether a deal can be done to avert our next strike.

‘I will be standing on our picket line in Liverpool and will be encouraging fellow delegates and Labour MPs to do likewise, so they can rightly show they stand shoulder to shoulder with those fighting the Tories’ cost-of-living crisis.’

Labour leader Sir Keir again ruled out joining workers on a picket line today. He told Channel 5’s Jeremy Vine: ‘When it comes to industrial action, I completely understand why people are voting to go on strike.

‘I understand how much they’re struggling – wages have been stagnant for the best part of 10 years, we’ve now got a cost-of-living crisis, so prices are going up.’

Asked if he would join TSSA workers on the picket line he said: ‘No. I want a Labour government, I want to be a Labour prime minister. You can’t sit around the Cabinet table resolving issues and then walk onto a picket line, they are different jobs.’

Meanwhile Aslef’s general secretary Mick Whelan said today as his union announced the new strikes: ‘We regret that, once again, passengers are going to be inconvenienced.

‘We don’t want to go on strike – withdrawing our labour, although a fundamental human right, is always a last resort for a trade union – but the train companies have forced our hand.

‘They want train drivers to take a real terms pay cut – to work just as hard this year as last, but for 10 per cent less.

‘Because inflation is now in double figures and heading higher – much higher, according to some forecasts – and yet the train companies have offered us nothing.

‘And this for train drivers who kept Britain moving – key workers and goods around the country – throughout the pandemic and who have not had an increase in salary since 2019.’

Unions today warned that a funding deal for Transport for London will lead to fresh strikes over concerns it will attack Tube workers’ pay and pensions – while travel campaigners voiced fears over future fare increases.

The Department for Transport confirmed last night that it had struck a deal with Transport for London (TfL) to help the service cope with potential lost revenue caused by uncertainty over post-pandemic demand.

TfL expects to receive around £1.2billion of funding from the Government until the end of March 2024 to help should passenger numbers not recover at the rate budgeted for, amid continued concerns over home-working.

But London Mayor Sadiq Khan said a £740million funding gap remains in TfL’s budget over the next 20 months, with fare increases and service cuts under consideration alongside efficiency savings.

Mr Khan accused the Government of seeking to provoke further strikes under the terms of the agreement, which require him to continue work on introducing driverless trains on the Underground and seek pension reforms.

Assurances over revenue will enable TfL to commit to £3.6billion on investment projects – but the Rail, Maritime and Transport union (RMT) claimed that the deal would hit Tube workers’ pay and pensions.

The union said the deal ‘appears conditional on attacks on workers’ pensions, potential job losses and a push for pay restraint in the future despite the astronomical rise in inflation and an escalating cost of living crisis’.

He added: ‘We want the companies – which are making big profits, and paying their chief executives enormous salaries and bonuses – to make a proper pay offer to help our members keep up with the increase in the cost of living.

‘That’s why we are calling on the companies today to do the right thing – the decent thing – and come back to the negotiating table with an offer our members can accept.’

Aslef members have already walked out for 24 hours on Saturday, July 30 and on Saturday, August 13 at the 12 train operators.

Aslef added that it is in negotiations with Direct Rail Services and Transport for Wales, and has put an offer from Colas IM to its members.

A Department for Transport spokesman said: ‘For the eighth time this summer, union leaders are choosing self-defeating strike action over constructive talks, not only disrupting the lives of millions who rely on these services but jeopardising the future of the railways and their own members’ livelihoods.

‘These reforms deliver the modernisations our rail network urgently needs, are essential to the future of rail, and will happen. Strikes will not change this.’

It comes as another rail union warned that a  funding deal for Transport for London (TfL) will lead to fresh strikes.

The RMT said the announcement of a long-term funding arrangement by the Government and TfL yesterday will attack Tube workers’ pay and pensions.

The union said driverless Tube trains were included in reforms called for by Mr Shapps as part of the deal.

RMT, along with other transport unions, will be holding a Save London Transport rally tonight with special guest US senator Bernie Sanders.

‘Grant Shapps’ attack on Tube workers would be unacceptable at any time but in an escalating, cost-of-living crisis it is shameful and will be resisted through further strike action.

‘The rally tonight will send a message that RMT and other transport unions will not tolerate attacks on workers’ pay and conditions or cuts to public services.’