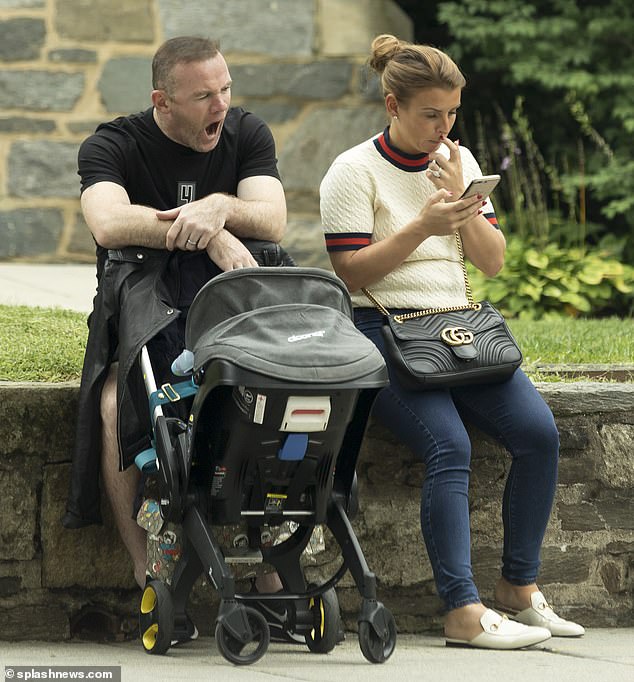 
Americans are mocking the wife of UK soccer legend Wayne Rooney after she made it clear that she would not be joining him in Washington, D.C. because she hates the country and finds the lifestyle boring.

Coleen Rooney told friends she hates America and wouldn’t be moving there with Rooney, 36, if he returned to work for DC United but now a move stateside appears to be on the cards for the former Manchester United striker following reports that he has agreed contract terms to become the Major League Soccer team’s new coach.

And now the soccer star’s wife is getting slammed on social media for her refusal to join him after he arrived at Dulles International Airport on Sunday night without her and their four children.

Some joked that Coleen, who is used to a lavish lifestyle, would be a ‘Real Housewife of Potomac.’ Another one tweeted about her life being compared to ‘Arrested Development’ in which a formerly rich family is forced to live a ‘normal’ life.

The couple have been married since 2008 and have four sons — Kai, 12, Cass, four, Klay, nine, and Kit, six. But it was reported that the couple, namely Coleen, who found life difficult when they moved to Washington, D.C., in June 2018.

A source close to Coleen, 36, told MailOnline: ‘She’s made her views clear to Wayne. There’s no way she will want to go to Washington. The last time, she absolutely hated it there.’

Coleen Rooney told friends she hates America and wouldn’t move there with husband Wayne Rooney, 36, if he returned to work for DC United

Coleen, 36, pictured here with husband Wayne, has told friends that their marriage is as strong as it’s ever been – but she has made her views on moving across the Atlantic clear to Wayne

‘She doesn’t want to live outside the North West of England, never mind live in Washington again. The family is more settled than it’s ever been. They have four kids who are all in school and all of Coleen’s family live close to her.’

The source added: ‘There’s no way that she’d want to give all of that up to go and live in a place she hates.’

The family has previously lived in a £3m mansion in Prestbury, Cheshire and a £20m estate in the Wag area.

They are used to lavish nights out at the five-star Chinese restaurant, Wing’s, in Manchester, where it costs about £60 per person.

Friends have told the Sun in the past that: ‘Wayne and Coleen are really bored over there. She has no friends and is at home with their kids all the time.

‘They live in Maryland, which is really quiet, so if they do go out it’s bowling or cinema with the kids.’

It is not clear where they will live if the family is relocated to the area this time.

Some joked that Coleen, who is used to a lavish lifestyle, would be a ‘Real Housewife of Potomac’

Coleen Rooney (pictured out shopping today in Alderley Edge, Cheshire) has told friends that she hates the United States and she has no intention of joining husband Wayne there

According to a source close to Coleen, the mother-of-four (pictured with Wayne and their sons Kai, Klay, Kit and Cass) is settled in the north west of England and wants to stay there

Ironically, Rooney’s potential move comes as friends claim that he and Coleen have never been ‘more together’ particularly after the way he publicly supported her during the £3 million Wagatha Christie libel trial against Rebekah Vardy.

One said: ‘Wayne and Coleen’s relationship is the best it’s been in a long time. He supported her 100 per cent during the libel trial, turned up to court each day and stood by his wife.

‘They’ve just enjoyed a wonderful summer break with the kids, the longest they’ve had for ages, given Wayne’s football commitments in the past. As a couple and a family, they’ve never been happier and more united.’

The Washington Post reported that Rooney is close to agreeing a deal, with the ex-England forward, telling reporters and fans at the airport he has a ‘few things to sort out.’

It claimed that he will receive at least $1million annually and will act as a consultant for DC United until he is granted a work permit, which typically takes two to three weeks.

Coleen’s dislike of the US capital emerged in leaked text messages from 2018 sent to Vardy during the Wagatha Christie libel trial.

In response to Vardy asking how things were going, the Liverpudlian replied: ‘Hiya, hope your all week [well]. We’re ok, thanks its tough being on your own though.

Coleen went on to say: ‘Washington isn’t the best….nice to visit but different to live. Not loads for the kids to do, mostly park, hardly any soft plays and things like that. It’s quite behind the UK, which I never would have thought. But we will get used to it (I hope). ‘Wayne is loving it, and the kids are fine, settled into school straight away. So really happy they are fine. Thanks for the message love xx.’

Following the high profile ‘Wagatha Cristie’ case, the Rooneys went to Dubai  with Coleen (pictured with her four sons) describing the break as the ‘best family holiday’

In a separate message, she admitted that she ‘never believed in homesickness’ until leaving the UK, adding that she ‘cried every night’ due to missing her family back home.

Following the conclusion of the high-profile libel trial, the Rooneys jetted off to Dubai with Coleen posting social media pictures of the family enjoying their break in the sun.

Coleen captioned the images with the words: ‘We had the best Family holiday 2022. Dubai you were fantastic #grateful❤️.’

Rooney, pictured with his wife Coleen and their children on Christmas Day, was arrested on December 16, 2019, in Loudoun County, Virginia, home to Washington’s Dulles International Airport

Rooney played for DC United in 2018 and 2019, scoring 25 goals in 52 matches, travelled alone on Sunday without wife Coleen who struggled to settle in Washington when he was a player there.

Rooney, who was at Wimbledon with wife Coleen and son Kai on Friday, had a successful two year spell with the Washington-based side where he scored 25 goals in 52 games and energized the franchise, though his family did struggle to settle in the United States.

The move may be easier to manage this time round as the MLS season is due to end in October unless teams are in the play-offs and they will be wrapped up in November with the World Cup in mind.

Rooney has spoken openly about his ambitions to continue coaching here with his ultimate goal to manage Manchester United but a spell back in America would add another string to his bow as he looks to make himself a more accomplished coach.

In 2018, he was held in a cell for public intoxication and swearing after his drink-fueled outburst at the city’s Dulles International Airport on December 16.

Rooney, pictured left in a police mugshot, had set off an alarm as he opened a door and then swore at airport police who failed to recognize him. Coleen is pictured right

One witness claimed he told officials to ‘f*** off’ when he triggered an alarm in the airport when he ‘tried to go back to the plane’.

A source told The Sun Coleen was fuming with her husband and laid down the law about his future behavior.

The source said: ‘She told him he wasn’t to go out of the house again without her supervision. She was mortified when she got the call about it and wanted him straight home. She called him an idiot for doing something so stupid.

‘She warned him to never do something so daft again. When he’s been drinking and gets into trouble, it upsets her because she thinks it gives a bad impression of their relationship.’

Rooney is said to have become disorientated and triggered a security alarm after mixing alcohol and sleeping pills during a 14-hour flight from Riyadh, where he had been on a promotional event.

A witness told The Sun the fracas lasted 30 minutes and was prompted when Rooney walked through the international arrivals gate only to turn around and try to go back.

Rooney was arrested by Washington police officer Cpl. J.A. Spina and charged with public intoxication and released on a personal recognizance bond – and court proceedings had been booked for January 24.

He paid a fine with his credit card after he was released.

Wayne was spotted holding a large Aquaman trident and numerous shopping bags from GameStop. It emerged that cops kept the footballer in a cell for four hours to sober him up

In 2021, Rooney admitted he ‘made a mistake’ and apologized to his family and Derby County after photos emerged of the star partying and falling asleep in a hotel room with young women.

The married father-of-four said he was ‘looking forward to moving forward’ just hours after he paid the three party girls £1 to buy the copyright to the images after accusing them of blackmail, prompting them to offer an apology.

Rooney told Sky Sports News after he managed Derby to a friendly victory over Real Betis on Wednesday: ‘I made a mistake.

Rooney had been out with two friends, who are lower league footballers, who knew one of the girls in the now well-known pictures.

Rooney has recently been at odds with the powers-that-be at cash-strapped Derby as the former England striker has demanded more investment in the team that stayed in the Championship only by the skin of their teeth on the last day of the season.

The Rooneys’ home in Cheshire, which was undergoing development in 2018, is pictured