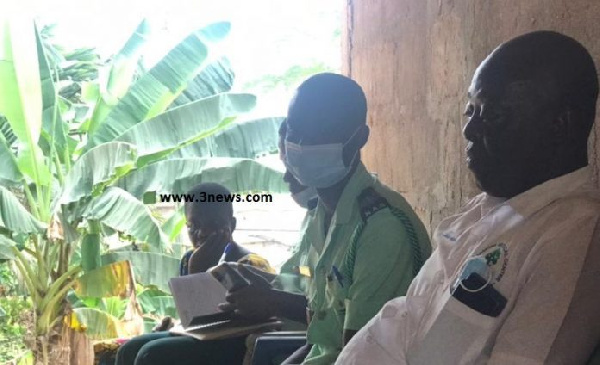 Officials from the National Ambulance Service have paid a formal visit to the husband of the young lady who died under bizarre circumstances a few hours after delivery in Takoradi.

The visit by the officials, led by Dr. Tawiah Siameh, the regional head of Service, was aimed at commiserating with the bereaved family.

Connect FM’s sources from Shama, where the widower has been living with his wife until the sad incident, indicate about four personnel of the Service visited the house.

The source further indicates the personnel after expressing condolences to the affected husband, pleaded for the issue to be settled amicably.

They also offered to support the husband in organizing a befitting burial for his late wife.

The team, however, implored him not to solely blame the Ambulance Service for the death of his wife with a promise that all the necessary investigations will be conducted into the case to ensure anyone found culpable is punished.

The family of the widower, as reported, indicated they will revert after meeting over the issue.

Husband of the deceased John Obiri Yeboah had taken on the Service after the death of his wife.

He blames officials of the Service for exhibiting unprofessionalism whilst discharging their duties, leading to the death of his wife.

He has also accused them of demanding an amount of GH¢600 from him to buy fuel, a situation that delayed the transportation of his wife from the Holy Child Hospital in Takoradi to the Korle Bu Teaching Hospital in Accra.

But Head of Public Relations at the National Ambulance Service, Simmons Youssif Kewura, has since denied the allegations and indicated that the hospital must rather be blamed for the death of the lady.

Therefore, the visit by the Service on Wednesday comes as a surprise.

In the meantime, authorities of the Holy Child Hospital have asked for more time as management puts together an official statement on their position on the entire issue.