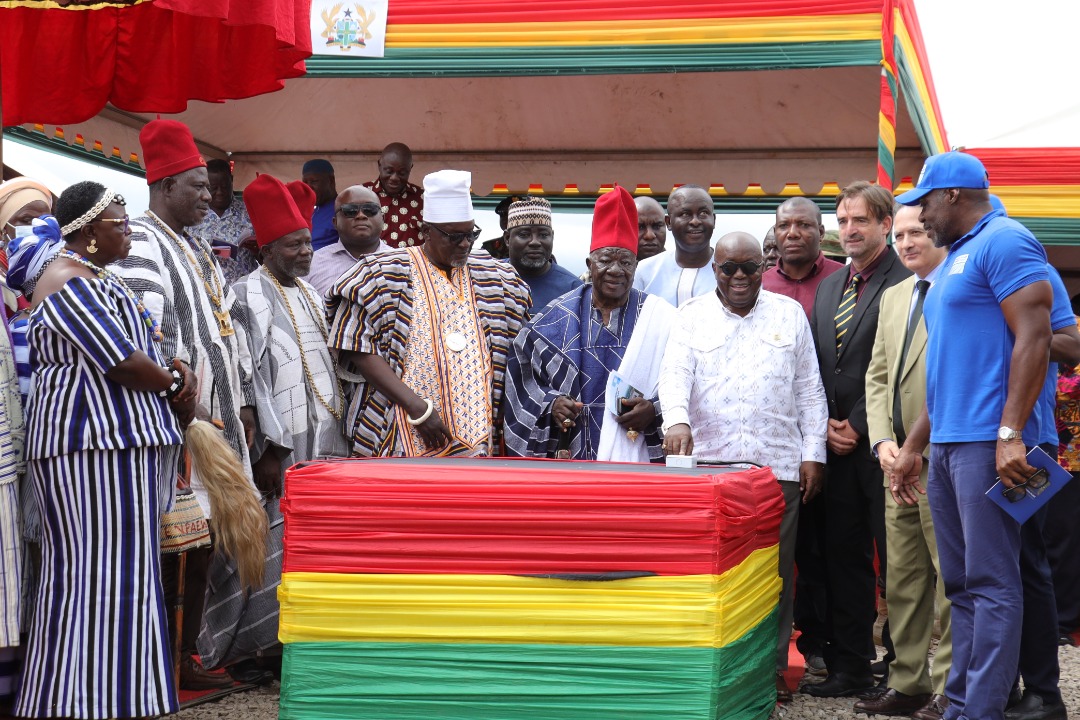 Commissioning the Kaleo Solar Power Plant, the President of the Republic of Ghana, H.E Nana Addo Dankwa Akufo-Addo, said the project which is the first phase of what will eventually be a 28MWp plant at Kaleo, reiterates Government’s commitment to diversify the country’s energy generation portfolio, and increase the nation’s renewable energy generation mix.

The President indicated that the Kaleo solar plant, along with other ongoing interventions in the area of energy efficiency, including use of natural gas for thermal generation, adoption of cleaner cooking solutions, de-carbonization of oil production, amongst others, is helping Ghana to accelerate the attainment of her Nationally Determined Contributions, as presented at COP26 in Glasgow, in the United Kingdom.

“The Solar project has a dedicated transmission line that evacuates power from the current and future solar capacity at Kaleo to the GRIDCo substation at Wa,” he said. “The completion of the Kaleo Solar Power Plant is consistent with Ghana’s Nationally Determined Contributions to addressing the effects of climate change.”

According to the President, “The Kaleo Solar Power Plant Project will provide several benefits, such as increasing the geographic spread of power generation assets; improving the resilience of the national power system; stabilising voltage levels and reliability of power supply in the Upper West Region; and, ultimately, reducing the nation’s carbon footprint”, he said

The President further stated that the construction of another 15MW Solar p Plant to give the project a total of 28MWp will create further employment opportunities for the indigenes of the Upper West region.

On his part, the Board Chairman of Volta River Authority (VRA), Mr. Kofi Tutu Agyare, said “This project, will increase Ghana and VRA’s Generation capacity by 13MWp, diversify VRA’s generation portfolio by adding more Renewable Energy Generation and improve the quality of power supply in the Upper West Region.

He further reiterated that “It will also help reduce the national carbon emissions by displacing energy that gas-fired thermal plants would otherwise generate (estimated at 3,400 tons of CO2) per annum. He assured the Technical Universities in the Northern part of the country that VRA is prepared to open its doors to the students to undertake practical training at the Plant site”.

He was upbeat that the Solar Plant at Kaleo is sufficient to meet a significant portion of the electricity demand in the Upper West Region.

Mr. Tutu Agyare promised Ghanaians that the Volta River Authority (VRA) will ensure effective maintenance of the Kaleo Solar Power Plant, as it is the Authority’s custom, so electricity accessibility and reliability will be assured.

“As part of our corporate social responsibility to the community, VRA through the project provided employment for 130 people, 95% of which were from nearby communities. The Kaleo D/A Primary School will also see some rehabilitation works as well as the provision of sanitary facilities for the school. The road from the Kaleo community to the Solar Plant was improved and it is also expected that the Power Plant will serve as an attraction for tourists to the Kaleo community”.

In an interview, the Chief Executive of VRA, Mr. Emmanuel Antwi-Darkwa took the opportunity to thank all the stakeholders that had been involved in the project. “I would like to take the opportunity to communicate our sincere appreciation to the Minister for Energy, Hon. Dr. Matthew Opoku Prempeh, the Minister for Finance, Mr. Ken Ofori-Atta, the Minister for Public Enterprises, Hon. Joseph Cudjoe, the Deputy Minister for Energy, Hon. Dr. Mohammed Amin Adam, Honourable Ministers and Members of Parliament present ,the German Ambassador to Ghana, Mr. Daniel Krulll, the Spanish Ambassador to Ghana, Mr. Jose Javier Gutierrez Blanco-Navarrete, the Upper West Regional Minister, Mr. Hafiz Bin Salih, Elecnor S.A, Tractebel Engineering, KfW, Executives and representatives of sister utilities, and certainly not forgetting the Board, Management and Staff of VRA.”

The Volta River Authority (VRA) was established on April 26, 1961, by the Volta Development Act, Act 46, with the mandate to generate, transmit and distribute electricity.  However, the Act was amended in 2005 as part of the power sector reform program to restrict VRA’s mandate to the generation of electricity.  The amendment also enabled the entry of independent Power Producers into the Ghana energy market.