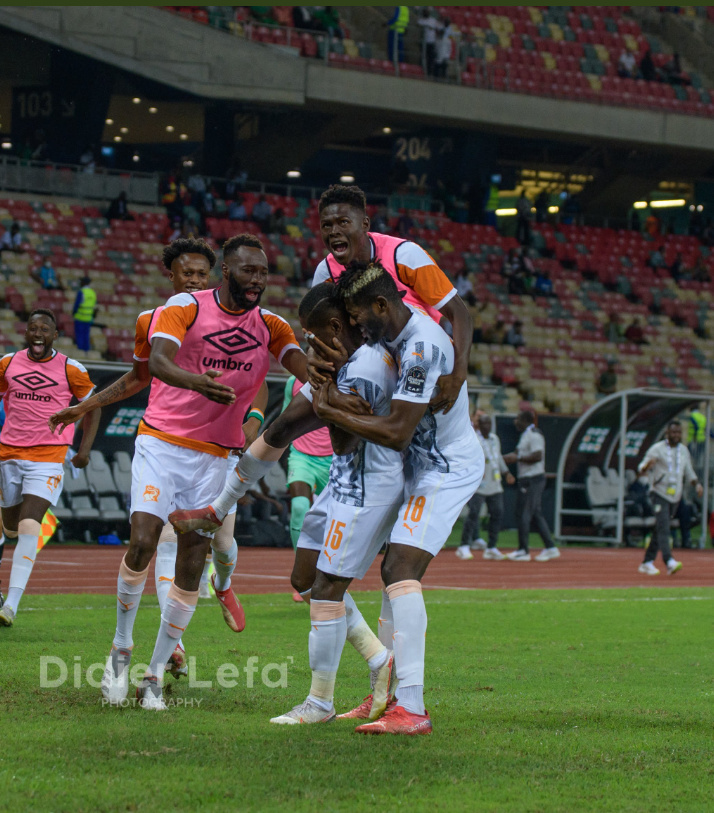 The Ivorian side celebrate the only goal of the game

The Elephants of La Côte D’Ivoire opened their 2021 AFCON Group E campaign with a slim win against Equatorial Guinea on Wednesday at the Japoma Stadium through Max Gradel’s impecable strike from outside the box.

Guinean Medfielder Carlos Akakpo’s mistake gave Max Alain Gradel, the Ivorian captain a chance to strike at goal and made no mistake as he struck the ball with venom after just four minute to hand the Elephants the lead.

On tthe 20th minute mark, AC Milan man Franck Kessie vollied a ball into the box to find Ibrahim Sangare who headed over the crossbar.

Equatorial Guineans came close through a nice effort by Jose Machin after Côte d’Ivoire goalkeeper, Badra Ali Sangare had fisted out a corner kick on the 25th minute before they came close again for the second time with Dorian Hanza whose attempt was however blocked by Manchester United defender, Eric Bailly on the 27th minute.

Equatorial Guinea started the second half on a good note with lot of energy and speed causing the Ivorian backline a lot of problems at the back.

A close chance came up for Iban Salvador but Côte d’Ivoire goalkeeper, Badra Ali Sangare managed to ward off the threat to keep the game at 1-0 for the Elephants on the 47th minute.

Pablo Ganet was let loose by Côte d’Ivoire on the 65th minute but he skied his effort much to the Elephants’ relief from inside the six-yard box with a wayward left-footed strike in an easy chance he should have buried.

Equatorial Guinea came extremely close to finding the equalizer on the 68th minute however, Iban Salvador’s effort went a fraction wide off the upright.

Nicolas Pepe was on the verge of pulling the second goal for Côte d’Ivoire but goalkeeper Manuel Sapunga parried the effort after the Arsenal Star came on in the second half.

Wilfred Zaha of Crystal Palace weaved his way through the Guinean defense but his effort went wide as it ended 1-0 to the 2015 Champions.