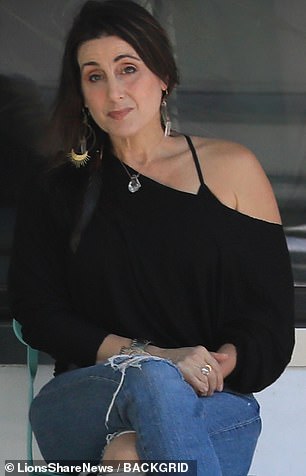 
Adam Levine’s former yoga teacher who accused him of sending her a dirty text tells how she was cut off and treated like trash by the singer after she confronted him about the unwelcome message.

‘This isn’t about a love affair or a salacious text, it’s about being a decent human being. Friends don’t treat each other like used trash, and that’s how he treated me,’ Alanna Zabel, 49, tells DailyMail.com in an exclusive interview.

Zabel, who trained the Maroon 5 frontman from 2007 to 2010, alleges Levine said he wanted ‘to spend the day with you naked’ and bragged to his friends about how she had ‘the best a** in town and it was cute.’

She claims her then-boyfriend saw the message, became violent and flew into a jealous rage, snapping her wrist.

‘[Levine]knew what I was going through with my then-boyfriend who became abusive, and instead of responding to my text, he simply cut me off,’ she said.

Alanna Zabel taught Adam Levine yoga from 2007-10, after the Maroon 5 frontman’s personal trainer said he should try the practice. She claims Levine, 43, texted her: ‘I want to spend the day with you naked’

Levine and wife Behati Prinsloo took their daughter for a walk in Santa Barbara on Thursday as more women have spoken out about the singer. He was not married at the time that he allegedly sent the text to Zabel

Now Zabel tells DailyMail.com in an exclusive interview that the singer treated her like trash after she confronted him about the message

Zabel is the founder of AZ I AM Yoga, a yoga and wellness center in Santa Monica, and the author of As I Am: Where Spirituality Meets Reality. She has a long list of celebrity clients.

While Zabel acknowledges that she and Adam were not in a romantic relationship, she explained that the two had become close friends after working privately together for several years.

Zabel says she made the decision to speak out about Levine after seeing several other women come forward.

‘When I found out that Adam had asked this influencer if he could name his baby after her, I saw him in a completely different light and decided it was finally time to share this,’ she said.  ‘If I wanted my fifteen minutes of fame, I would have gone public with this a very long time ago.

‘Harboring this pain for as long as I have has taken a lot of valuable energy to hold onto, and in order to heal we need to let them go.’

At the time, Zabel was in preparations to join Maroon 5 on tour as their yoga instructor for three months, when Adam abruptly pulled the plug with no apology.

‘I felt that we cared about each other, and he iced me out during a deeply upsetting time,’ she said.

Zabel said she wants Levine to take this opportunity to be a role model for other men, and people in general.

‘It’s simple. Don’t be a jerk,’ Zabel said. ‘Don’t treat women like they are disposable, or that their value is solely based on their looks, and for God’s sake please be a role model for your young girls. Children learn by what they see far more than what they’re told.’

Zabel is the founder of AZ I AM Yoga, a yoga and wellness center in Santa Monica and has a long list of celebrity clients. She was seen Thursday outside her LA studio

‘I want Adam to take this opportunity to be a role model for other men, and people in general. It’s simple. Don’t be a jerk,’ she said

‘One day he texted me saying: ”I want to spend the day with you naked.” I was in the bath but my jealous ex saw it and went into a rage.’

Zabel said she told her ex the text was evidently intended for Levine’s then-girlfriend Becky – believed to be Rebecca Ginos, a cocktail waitress he dated from 2006-9. She asked Levine, and he did not reply.

Zabel called it a ‘massive life changing, destructive moment, and when I told Adam he ignored it, never apologized.’

Levine took up yoga after being advised of its health benefits. He told Women’s Health magazine in June 2008: ‘Yoga will drastically improve you in every way imaginable.

‘But let’s face it, I only practice yoga because the classes are always packed with beautiful women.’

Zabel has written multiple books about empowering women and children of all ages, which is part of what prompted her to speak out now. She also created the first line of yoga dolls, the AZ I AM Girlz doll collection, representing teenage girls who are beautiful from the inside out, making a positive difference in the world today.

‘I want young girls to love who they are, as they are,’ said Zabel. ‘That they are all a goddess in progress. The intention behind all of my products, be it dolls, stuffed animals, clothes, games or books is to teach positive self and social awareness by incorporating the basics of yoga.’

Stroh claimed the two lost contact after a few months, but said Levine later came back into her life this year when he revealed his wife was expecting their third child and asked if he could name the child Sumner, leaving her horrified

Ashley Russell, 21, who runs a health and exercise Instagram account, told DailyMail.com how Adam Levine suddenly began messaging her after he allegedly came across her profile  randomly in March

Zabel’s allegations follow those made by other women claiming inappropriate messages, and one other alleging an affair.

he shocking cheating scandal erupted on Monday after 23-year-old model Stroh shared a now viral TikTok video claiming she had an affair with the singer in 2021 that lasted ‘about a year.’

Stroh shared screenshots of their flirty exchanges on Instagram, including one bizarre message from June where Levine asked if he could name the unborn baby after her.

Comedian Maryka and a woman named Alyson Rose posted screenshots of their alleged Instagram conversations with Levine, shortly after LA-based model Sumner Stroh revealed she had a secret relationship with the singer last year.

And an Alabama college student has become the fifth woman to speak out on Levine’s wandering eyes.

Ashley Russell, 21, who runs a health and exercise Instagram account with just over 4,100 followers, said she was surprised when she noticed the singer was among the users watching her Instagram stories at the beginning of March this year.

The fitness fanatic, a senior at Auburn University, told DailyMail.com the 43-year-old then began liking her posts and sending her direct messages trying to engage in friendly, flirty conversation.

In a statement posted on his Instagram account Tuesday, the lead singer of Maroon 5 said he had used ‘poor judgment’ and had been ‘inappropriate’ by speaking to another woman in an flirtatious manner, but denied having an affair

He often replied to photos of her working out, particularly those showing off her toned legs and glutes, but would almost immediately delete the messages after she had read them, she claimed.

According to Russell, the flirty exchanges began happening almost daily, but ultimately ran dry by the end of the month after she warned the married father-of-two that he was going to ‘get caught’ flirting with women online.

Her claims come as Levine and his pregnant wife, Behati Prinsloo, were spotted Wednesday strolling around Montecito, California with their daughter.

The allegations emerged just four days after supermodel wife Behati confirmed they are expecting their child.

In a statement addressing the rumors Tuesday, Levine admitted he ‘crossed the line’ and was ‘inappropriate’ with another woman, but seemed to imply that the relationship was not physical.