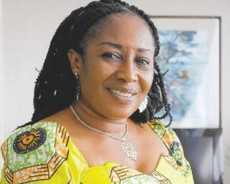 
Veteran actress, Patience Ozokwor has said she does not think anyone can replace colleague, Olu Jacobs in the movie industry.

The 63-year-old actress said this at the 80th birthday of Olu Jacobs held at the Glover Memorial Hall in Lagos on Sunday, June 11.

Patience Ozokwor, while appreciating the actor for his acting skills, said she misses him on set and his versatility to play any role.

“I’m missing him on set, he can play an Igbo king, he can play a Yoruba king, in fact, I don’t think anybody can replace him,” she said.

The 80-year-old entertained friends, family, and coworkers to a lavish banquet at Lagos’ illustrious Glover Hall. Dignitaries from many spheres of life attended the event to honour the cinema legend.

The former governor of Ogun State, Olusegun Osoba, and the governor of Ekiti State, Kayode Fayemi, were among the prominent dignitaries present.

The appearance of the movie veteran, his gorgeous wife Joke Silva, and their two sons to the celebration location was a highlight.

The visitors were impressed by the actress as she performed the customary cake cutting.

Olu Jacobs: ‘There’s no retirement for me’

Due to his health issues, Jacobs has been out of the public eye for some time.

His dementia was initially made public by the renowned wife, Joke Silva.

The actress disclosed that her husband has been battling dementia in an interview with Chude Jideonwo.

“He is dealing with issues and it is been going on for a couple of years. It is known as dementia with Lewy body,” she said.

Actor and film executive Oludotun Baiyewu Jacobs, better known by his stage as Olu Jacobs, is from Nigeria.

He has acted in a number of foreign and British television series.

One of the greatest and most well-liked African actors of his generation, Jacobs has received a lot of praise.

Among those who have heaped praises on him is the presidential candidate of Peoples Democratic Party (PDP) in the forthcoming Presidential election in Nigeria, Atiku Abubakar. He joined the rest of the world to celebrate the veteran Nollywood actor on his 80th birthday.

He wrote, “Today, I celebrate a freshly minted Octogenarian, Sir Oludotun Baiyewu Jacobs (Olu Jacobs). You have seen the world change tremendously and imparted it in your stead. You have been an inspiration to many, a highly respected and honourable person.”